Eleuthero (Eleutherococcus senticosus) is one of our premier adaptogens in the herbal world, widely loved for its stress reducing, quality of life enhancing properties. Previously known as ‘Siberian Ginseng’ in common reference, it was re-named to its current moniker to avoid confusion with the true Ginsengs, Asian Ginseng (Panax ginseng) and American Ginseng (Panax quinquefolius). Though these herbs are all related and prized for certain similar effects, Eleuthero is quite unique. It even shares a native range with Asian Ginseng, however, the two herbs never grow together, perhaps with intention. 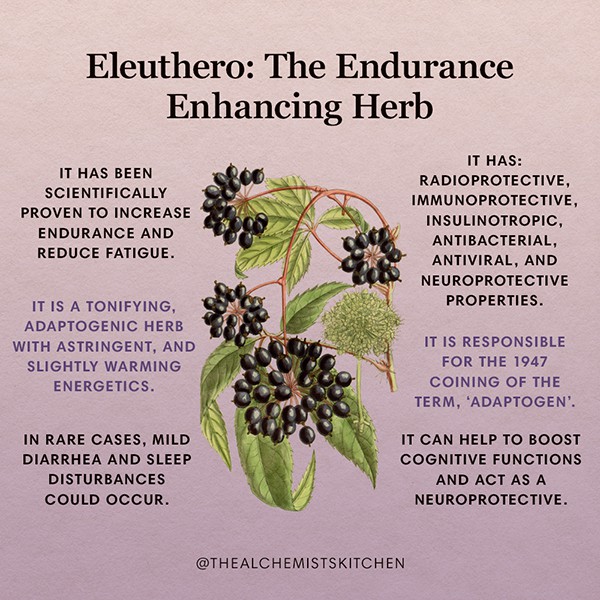 Eleuthero is native to Northeastern Asia and grows wildly and abundantly in the Southeastern regions of Russia and throughout Korea, northeast China, and Japan. It is in the Araliaceae family; it’s a deciduous, slow-growing, woody shrub that reaches heights of about 6 feet. It has many, mostly unbranched stems. While the young stems are covered with flexible prickles, the mature stems eventually become smooth. Its leaves are palmately compound with five leaflets and serrated margins. Multiple, small flowers bloom at the end of the long stems. The flowers are hermaphroditic, and pollinated by insects. Its fruit is a dark purple drupe with multiple kernels and the root, the part most commonly used medicinally, is a cylindrical taproot with a smooth exterior and rhizome.

Hardy to zone 3, Eleuthero is tolerant of a wide range of soils and doesn’t seem to mind Ph variance, pollution, or low nutritional value. It will also grow happily in full sun or partial shade.1 The scientific name, Eleutherococcus means “free-berried,” from the Greek, and senticosus, from the Latin, means “thorny”. The plant is known as Shigoka in Japan, and Ciwujia or Gogahi in China.3 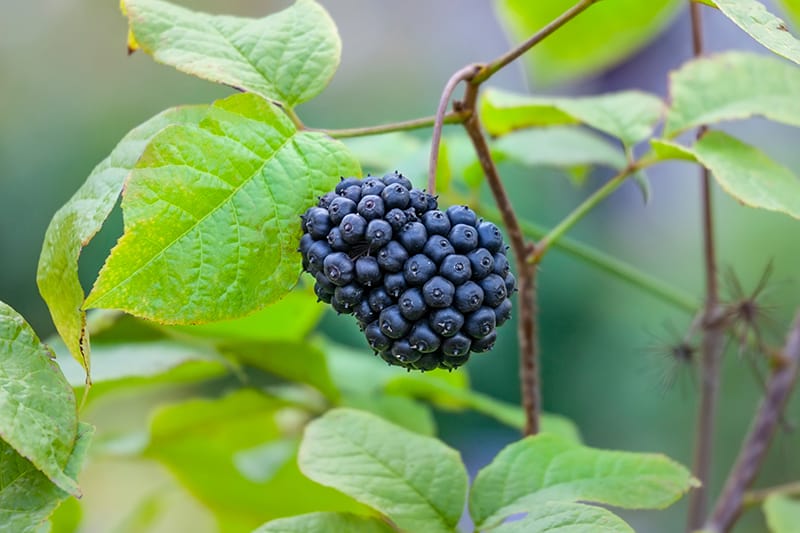 Indigenous peoples of the Asian continent have used Eleuthero medicinally and ceremonially since before recorded history, for at least 4,000 years.

In Russia, it was originally used by Indigenous peoples in the Taiga region of Siberia to decrease disease and infection and increase endurance, strength, and quality of life. It has been in recorded use in Traditional Chinese Medicine (TCM) for over 2,000 years. It is listed in the ‘Shen Nong Ben Cao Jing’, TCM’s oldest pharmacopoeia, in which it was purported to expel ‘Wind Dampness’, strengthen sinew and bone, reduce swelling, enhance Qi (energy/vital force in the body), and be used against respiratory tract infections, chest colds, and the flu.

The 16th century Chinese herbalist Li Shizhen, author of the renowned ‘Compendium of Materia Medica’ said of the root that he’d, “rather take a handful of Eleuthero than a cartload of gold and jewels.”4 Eleuthero leaf was also used as a poultice, a compress, and as an anti-inflammatory remedy. Traditionally, the roots were collected during the month of October, when the active constituents of the roots are highest, a practice that is still largely observed today.8

In the west, it was 20th century Russian scientists who popularized Eleuthero; from the 1940s – 1960s, extensive clinical research was conducted on it as the Soviets searched for a performance enhancing herb that would give an advantage to their soldiers, Olympic athletes, astronauts, and explorers. These scientists were also looking for a more abundant and economical option to Asian ginseng, which had already become scarce by that time.3 In the ‘60’s, a study was conducted on over 2,000 healthy people which showed that it increased subjects’ ability to withstand stressors like extreme temperatures, loud noises, commotion, exercise, and increases in workload. Subjects also reported increased mental alertness and work output.2 Further research demonstrated that it helped to prevent and treat infectious diseases like the flu as well as serious, long term conditions like diabetes, heart disease, cancer, and chemical toxicity.

Many Russian and Ukranian citizens were given Eleuthero in the aftermath of the Chernobyl nuclear incident, to counteract the deleterious effects of radiation, as it was shown to protect mammals from radiation and chemical warfare. It has also been studied and successfully used as an immune-modulator in cancer treatment to improve patient survival and recovery rates and to inhibit future metastasis and recurrence.6 As a result, Eleuthero became a very popular supplement in Russia.

It was first marketed in the U.S. in the late 1970s, and has since become one of the most commonly used herbs and herbal supplements. Through the Russian research completed, Eleuthero became a model for all other adaptogens. It is responsible for the 1947 coining of the term, ‘adaptogen’, which came from Soviet scientist, N.V. Lazarev who used it to describe its actions. Adaptogens now refer to a class of plants that help the body and mind adapt, by increasing broad spectrum “non specific resistance” to various stressors.5

Eleuthero is a tonifying, adaptogenic herb with astringent, and slightly warming energetics. It has: radioprotective, chemoprotective, immunoprotective, antiviral, antibacterial, insulinotropic, and neuroprotective action. It has a modulatory effect on the immune system, calms the central nervous system, and reduces symptoms of altitude sickness.8 I find it to be particularly helpful for those who “work hard, play harder,” or for Type A workaholics burning the candle at both ends. I think of Eleuthero for patterns of adrenal fatigue and deep exhaustion with an energetic, overly cheery, or manic exterior.

More so than other adaptogens, Eleuthero has a particularly balancing, modulating effect. For example, it is suitable for those with both elevated or lowered blood pressure and those with underactive or overactive immune responses.6 It supports adrenal function (the gland responsible for secreting cortisol and other stress hormones) and helps to heal adrenal hypertrophy, a common condition that develops as a result of prolonged stress response. In addition, it protects the adrenals from losing necessary vitamin C during long periods of stress.

In 9 different studies on the effects of Eleuthero, that included almost 2,000 total participants, all but one participant reported positive effects on immune response, stress, fatigue, or cardiovascular health. It also demonstrated favorable effects on other functions in these studies, including visual acuity, color differentiation, auditory capacity, mental association, and motor activity.2

It has been traditionally understood and scientifically proven in multiple studies to increase endurance and reduce fatigue. In one Soviet study on mice, Eleuthero lengthened the time the mice spent performing a swim test and other endurance tests by lessening the build up of lactic acid and increasing fat utilization. In another study, mice given it didn’t show the expected behavioral deterioration from sleep deprivation.2 Human studies have found similar improvements in endurance among athletes who were given it; this is most likely due to improved oxygen utilization, improved cardiovascular function, and improved glycogen metabolism. One study found that consuming 800 milligrams of Eleuthero per day for 8 weeks increased a male subject’s stress test endurance time by 23%, oxygen saturation by 12%, and highest heart rate by 3%.3

Along with improving response to stress and overall endurance, it can also help to boost cognitive functions and act as a neuroprotective. Research has found that consumption of Eleuthero enhanced learning and memory in elderly rats, likely because it helps the body both recycle choline, an essential nutrient, and produce more choline in the hippocampus. A study on an extract of Eleuthero leaf found that it measurably improved memory in mice over 17 days. In addition, it increased mental sharpness and acuity in a similar way to coffee, without the negative effects of caffeine.7 Other studies have demonstrated that it acts like a general neuroprotective, specifically, it’s been shown to prevent slow movements and certain types of seizures associated with Parkinson’s disease (a neurodegenerative disorder) in patients that were in the early stages of Parkinson’s.1

No side effects of taking Eleuthero have been documented in healthy individuals. In rare cases, mild diarrhea and sleep disturbances (if taken right before bedtime) could occur. In patients with rheumatic heart disease, side effects such as pericardial pain, headaches, and elevated blood pressure have been reported.3

Eleuthero may be used in many forms; the following preparation suggestions are the most widely used and accessible to obtain in the practice of modern herbalism.

A tincture is usually my go-to preparation as it’s portable and easy to dose. Tinctures are usually an alcohol (at least 80 proof vodka, overproof grain alcohol, or other clear booze) extraction of a plant, however, vegetable glycerine or apple cider vinegar can be substituted to keep preparations alcohol-free. To prepare a tincture, pour menstruum of choice over fresh or dried herb–the classic extract for Eleuthero is a potent 1:1 alcohol to dried root–in a preferably glass container for at least 6 weeks. Label and seal the jar and shake every day until it’s time to strain and put into a dropper bottle. Always consult with a trusted herbalist for doses for particular ailments.

Another wonderful way to add it into a daily regime is to work with the powdered root. To make, you’ll need a high powered blender or powdering machine and dried Eleuthero root, blend until the root is finely powdered. Add 1-2 teaspoons of Eleuthero powder to desired liquid or food, 2-3 times per day.

Eleuthero Root can also be made into a tea or decoction. I like to add it to herbal coffee substitute blends for clients who love coffee but need to avoid it; it pairs well with Roasted Chicory Root, Roasted Dandelion Root, Cinnamon, and Lemon Peel. To make a simple Eleuthero decoction, add 1-2 teaspoons of dried Eleuthero root to 12-16 ounces of water and simmer over low heat for at least 30 minutes, up to 2 hours, or until the liquid is reduced by half. Drink up to 3 cups per day for calm, sustained energy.

Because it doesn’t grow very well outside of its native range, it’s best to purchase it from reputable local businesses. For instance a neighborhood herb store or trusted, small businesses on the internet. Carefully selected, intentional herbal products with Eleuthero in them can be found at The Alchemist’s Kitchen. My favorites include this super powerful Energy Tonic by Urban Moonshine and this adaptogen-packed Fit Adapt tincture by David Winston.