The practice and religion of Santería, like so many other spiritual practices before it, have been stigmatized and fetishized by our colonizers. In recent years as an active Latinx Brujx, there has been an accession within our communities and the energy is building. Santería’s deep roots flow within the veins of my mother, her mother and so on, empowering me to shed light and empower more Brujxs to reclaim their truth. In pop culture, there has been a new wave of acknowledgment for the Orishas (Orichá or Orixá) from musicians like Ibeyi, Princess Nokia and even Beyonce.

My intention is to teach those curious about the religion, while de-stigmatizing and empowering the culture to allow our practices to be respected and done with intention. Orishas (Orichá, Orixá or Òrìsà in its original Yoruba spelling) are the human embodiments of spirits sent by the three manifestations of Supreme beings in the Yorubic pantheon. These three Supremes are: Oludùmarè who is responsible for the creation of life and is unbound by space or time, Olofi the protector of our planet and conduit of Heaven (Orún) and Earth (Ayé), and Olorun or Olodumare, the keeper of all celestial and the embodiment of faith. The Yoruba people did not worship their Supremes with shrines or sacrifices as is traditional but considered them to be the origin of virtue and mortality bestowing knowledge of all things.

Brujería is a broad term used for centuries to describe numerous spiritual practices in Africa, the Caribbean, and Indigenous Latin America. The heart of Santería (or Lucumi) began in Nigeria, the home of the Yoruba people, and saw its rise when Spaniards went to West Africa and took the Yoruba tribe as slaves and sent them to different American countries from Cuba to Argentina. This practice flourished as an Afro-Cubano practice that formed side by side with the rise of Spanish Colonization in Latin America between the 15th and 16th Centuries. The Inquisition ultimately empowered marginalized communities to thrive off the fertile ground of mystical beliefs that were out of their control. This beloved practice of African, Caribbean, and Indigenous Latin American descent came to fruition through rebellion and is seeing a revival in our youth. Bruja/Brujx is no longer a derogatory word. We are now using this word as a tool for emancipation from our colonizers. In the beginning, we were healers, midwives, and vendors practicing with many intentions without restrictions on orientation or skin color. This showcases the cyclical nature of Brujería and Santería as we enter similar times of Diaspora, Intolerance, and Patriarchy. We are still midwives, curanderos, artists, protestors, and so on. It’s important to note that while Brujería and Santería are practiced with an emphasis on feminine energy, the heart of it is healing and cleansing. You can be a brujx from Africa, Perú, Asia, Europe, you name it. I hope to continue to shed light on this misunderstood religion piece by piece and to allow all to engage in its practice with respect and intention, especially if you are not a person of color. 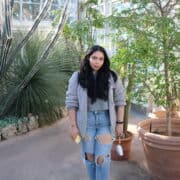 Jess Ramírez is a first-gen Ñu-Yorkina of mixed decent including Andean, Middle Eastern and European Roots. With a passion for regenerative farming and ethnobotany throughout her life she has been called to herbalism, divination and healing modalities.

The Astrology of September 2019: The Beauty of Imperfection