Commonly perceived as a vegetable, fungi are actually a kingdom of their own outnumbering plants 6:1. Considering humans share about 40% of our DNA with mushrooms, it’s no surprise that humans have been using fungi for their medicinal properties for thousands of years. With an estimate of 2 – 5 million species of fungi in existence, only 120 thousand have been described. That’s at most a little over 8%. Out of the possible 2 – 5 million species, only 7 species are grown on a mass scale. Of those 7 species, Reishi or the “Queen of Mushrooms” is revered and cultivated for its abundance of healing properties. 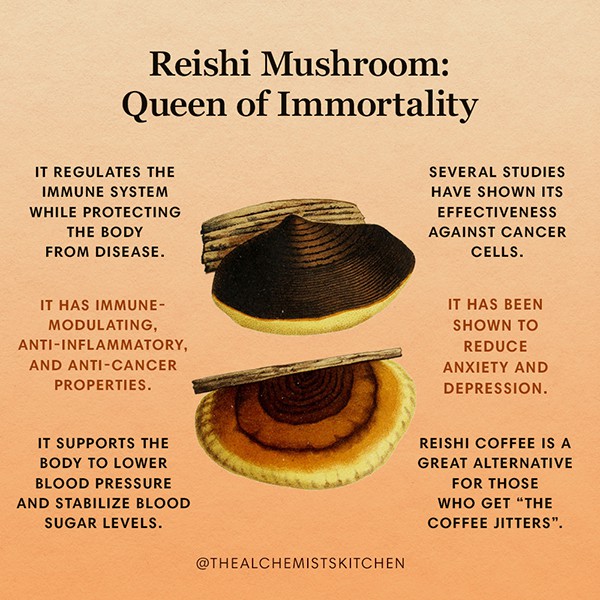 What is Reishi Mushroom

Typically reddish-brown, this fan-shaped mushroom has been noted as having a glossy or lacquered-looking body with a woody texture. It can be consumed as a tea, in a capsule, powder, or elixir. Considered as the “herb of spiritual potency” in China, Reishi or “Lingzhi” in Chinese symbolizes immortality, success, well-being, divine power, and longevity. However, there are several types of Reishi but due to its high potency, Ganoderma lucidum is a particular species that is most commonly produced and sold on a mass scale. Other species include Ganoderma tsugae, Ganoderma oregonense, Ganoderma curtisii, Ganoderma capense, Ganoderma carnosum, and Ganoderma resinaceum.

Despite the more recent use of Reishi in the west, it has been widely used in Traditional Chinese Medicine for thousands of years. In ancient China, it was reserved only for royalty such as emperors and was highly regarded as a miracle elixir. Additionally, during this time it was also represented as the “bridge between Earth and Heaven”. Now, it continues to be commonly used in traditional medicinal treatment across modern-day China.

Reishi was first discovered by Chinese healers more than 2,000 years ago in the Changbai Mountains during the Han Dynasty. The Changbai Mountains, which translates to “Perpetually-White Mountain Region” is known for its freezing conditions. Though at the bottom of the mountain lives a temperate forest where Reishi mushroom spans across the dense mountain floor fruiting off of decaying or dead trees.

Ancient Chinese scripts documented the mushroom as an “elixir of immortality”. While Chinese paintings, embroideries, and sculptures depict it as extremely sacred and life-sustaining. It has even been showcased in ancient artworks related to Taoism. In one of the first Chinese publications to document the medicinal value of herbs, Shen Nong Ben Cao Jing, it is discussed for its therapeutic benefits, anti-aging properties, and cleansing abilities. In 1596, the Bencao Gangmu was published featuring 6 species of Reishi. When considering the wide range of benefits it contains, it’s no surprise that it has had a long-dated history of use.

Reishi is an immune modulator, meaning that it regulates the immune system while protecting the body from disease. Additionally, it has been found to possibly alter inflammation pathways in white blood cells. One study showed its positive effects on lymphocyte function which help fight infections. Its impact on white blood cells and immune function is a clear example of its immunity supporting capabilities.

Reishi is commonly used for its cancer-fighting properties. Several studies have shown its effectiveness against cancer cells. Furthermore, research suggests that it decreased the number and size of tumors in the large intestine. Cancer patients have found that it can increase the activity of a specific type of white blood cell called natural killer cells that effectively fight infections and cancer within the body. The continuing research of its promising cancer-fighting abilities will only further our understanding of its medicinal properties.

Reishi is classified as an adaptogen, which aids the body in maintaining homeostasis through stabilizing stress-response. One study revealed the positive effects of its use on about 130 patients with neurasthenia and discovered the patient’s fatigue was reduced and well-being was improved after 8 weeks of fungi treatment. Reishi has also been shown to reduce anxiety and depression. Ideal for combatting stress, it is an excellent non-toxic option that can be taken consistently over long periods of time while balancing your physical and mental health.

When it comes to heart health, it is considered to be a powerful ally. It contains triterpenoids, a compound that may lower blood pressure and cholesterol levels. Moreover, the polysaccharides found in Reishi support the body to lower blood pressure and stabilize blood sugar levels. Used as an effective treatment for coronary heart disease, it improves cardiovascular circulation, enhancing the supply of oxygen to the cardiac muscle.

Due to the limited information on its side-effects, its difficult to know for certain how it will affect each individual. It’s important to consult with your doctor before taking any type of medication or nutritional supplement. However, there are some people who should likely avoid consuming Reishi: those who are pregnant or breastfeeding, have a blood disorder, have recently or will be undergoing surgery, or have low blood pressure.

If you’re seeking Reishi for the immune-modulating, anti-inflammatory, and anti-cancer properties you may considering a tea concoction. The polysaccharides are best extracted in water. This tea can be a calming and soothing way to receive your desired benefits. The tea can be prepared directly from boiling raw Reishi or there are pre-made options available.

Powder is great for multi-purpose use. It can be used as a tea, in smoothies, hot cocoa, baked goods, etc. Typically, the powder form is first extracted from either alcohol, water, or dual-extracted (combining both an alcohol and water extract) then freeze-dried to a powder form. Dual extraction is ideal in order to receive the full range of benefits of it has to offer because the Triterpenoids, the compounds responsible for lower blood pressure, and cholesterol levels are not water-soluble and must be alcohol extracted.

Often consumed to combat the negative side-effects of coffee, Reishi coffee is a great alternative for those who get “the coffee jitters”. The combination of coffee and Reishi allows for sustainable energy due to its adaptogenic effects.

Extracts are ideal to bring with you on the go. Similar to powders, it is most beneficial to consume an extract that is dual extracted. Extracts are potent and perfect for long-term use.

Where to Buy Reishi Mushrooms

It’s not tough to find Reishi mushrooms in supplemental form, just check out your local health food store or botanical shop. Of course, we got you covered as well with our variety of Reishi elixirs, powders, and supplements from trusted sources such as The Medicinal Mushroom Company. Check out our full list of mushroom products here.

Our Harmony tincture that contains potent Reishi and Oyster Mushroom extracts, along with adaptogenic Ashwagandha and soothing Lavender. The formula is alchemized with minerals, ash, and alcohol extracts, to support optimal cell absorption and nervine equilibrium. It not only eases stress and tension, but it also helps promote mental clarity, digestive strength and a better night’s sleep.

Another great, no fuss remedy is our Reishi Poweder; whenever you feel in need of a calming moment to restore balance and harmony, our organic triple action Reishi mushroom powder provides the most potent, bioavailable spectrum of organic mushroom extracts to support mind, body, and spirit. As an incredible and natural way to boost levels of daily vitamin D, introduce Reishi Triple Action mushroom powder to your daily routine and have the healing power of mushrooms in your hands.

Is the fruiting body or mycelium derived Reishi better?

What is wild harvested Reishi?

Wild harvested simply means log grown. Mycelium is grown in labs, usually on grains, which may end up in the final form for use.

What is the Optimal Reishi Mushroom Dosage?

Dosage often varies depending on the species as some types tend to be more potent than others. The form of consumption should also be taking into account. For example, 5g of extract may be equivalent to 50g of raw Reishi. The rule of thumb is to take the recommended serving on the nutritional label of your product. The highest doses range from 25-100 grams of raw mushroom, with extracts dosage as low as 1.5 – 9 grams.

Is there a Reishi Mushroom High?

Reishi is not considered a psychedelic mushroom. However, it may produce feelings of tiredness, may lower anxiety or stress, and positively affect overall mood.

Integrating The Dark & Illuminating Your Being