Halloween, or Samhain as it was called by the Celts, is upon us. Samhain is the name of the ancient pagan festival for celebrating the harvest and honoring the beginning of the “dark half of the year” – a time to ruminate and go inward as well as to revere the dead. Seasonal and cosmic rhythms exert their influence on us and we feel this intensely now as we pass through the eye of the needle of the Ascension, with mercury and mars both in retrograde, building up to the full moon on All Hallows Eve.

Natural Cycles Of Death And Renewal

Cycles of nature allow us to sow, ripen, reap and lie fallow – literally in the earth, and figuratively in our physical, emotional and spiritual being. It is the fallow and death part that is often misunderstood, sometimes inciting fear and loathing, even though it is a scientific fact that from the time we are born we die every minute of the day as our cells expire and renew. Death is a fundamental part of life. By accepting, releasing and integrating our past experiences we ‘die’ to parts of ourselves that no longer serve us in order to expand and grow.

In contemporary culture, there is much fear surrounding the idea of death, and any extra-
sensory, paranormal or other dimensional phenomenon is often regarded as superstition and folly. Over centuries pagan elements of worship were eliminated in the name of reform and religion. Those pagan elements included acknowledging the existence of dark energies in the world as self-evident, just as shadow is to the light. Over time, a collective cultural and psychological bias developed that negates a more holistic worldview containing both dark and light, where the dark polarity is not something to be feared, but respected and understood.

Without Integrating The Dark We Deny An Essential Part Of Ourselves

It is no surprise that over the same period suppression of the feminine held sway. ‘Witches’ were vilified for their intuitive gifts and deep relationship with mother earth. For patriarchy to rule, the feminine had to be dominated and subservient. We separated from our ancient roots and women became increasingly oppressed as we began to live in a way that placed ourselves superior to nature, rather than being a part of her. We began not just to disassociate from the natural world, but to deny a vital part of ourselves in the process. We are now living with the consequences of this imbalance: with millions suffering from stress and chronic illness, increasing polarization due to our inability to address injustices and inequities, and climate crisis on a global scale.

A Personal Journey Through Dark and Light

I have always been passionate about consciousness and personal transformation and have
explored a lot of different modalities for healing and spiritual development. Through being on this path for many years I was able to heal from trauma and negative patterns that were impeding my life. In the last two and a half years I experienced multiple life-threatening illnesses as well as energetic attacks. I had to confront limiting beliefs that accompanied these afflictions in order to complete this final intensive phase of healing. I ‘died’ to my old self by going through one healing crisis after another, shedding energetic blockages that had materialized into physical maladies. It was simultaneously disciplined physical convalescence and spiritual bootcamp. Now that I have holistically restored my physical, energetic, spiritual, mental, and emotional wellbeing, I am integrating the whole experience into my rebirthed self. With deep gratitude, I feel more vibrant and alive than ever before.

We Have Energy Bodies Beyond Physical

Aside from being in physical body we also exist on an etheric, astral, and causal level with
corresponding energy bodies. These layers are linked to our mental, emotional, and spiritual selves, past lives, karma, soul-level lessons, and blueprint of evolution. When there is misalignment between these aspects or if there is severe disturbance in our energetic field, this can gradually manifest as malaise and sickness if not rebalanced and healed.

Our energetic field can be compromised by unresolved grief and anger, by externalities like stress and overuse of electrical technology, and it can also be manipulated by another person who wishes to do us harm. Negative thoughts and judgements we have about ourselves create incoherence in the functioning of our endocrine, parasympathetic nervous system, and other bodily systems that can damage our health and disrupt our wellbeing. A curse is an energetic attack perpetrated by someone who is trained to manipulate our energetic field to affect us negatively. This often requires help from powerful medicine women and men and energetic healers to dissipate. At this level smudging with sage and your basic energy clearing won’t resolve the issue. You need professionals who have the necessary training.

If you only treat the physical symptom without treating the energetic source of the disease it can reappear. Many alternative medicinal systems like Ayurveda and Traditional Chinese Medicine (TCM) are based on holistic principles that address causal imbalances. Likewise, many indigenous and ancient healing practices such as shamanism deal with unseen energetic and spiritual forces. Intention is powerful, and just as you can use it for expansion and abundance, the opposite is also true. Physical health issues have a whole other dimension to them that most people aren’t aware of.

Have Awareness Of The Dark Polarity, Not Fear

If you can keep an open mind you will begin to see what I am saying is not that far-fetched. Dark polarities exist in the unseen world just as they do in the physical realm. They also operate in the same way – through fear. This is very important to recognize. Fear only has one purpose: to generate more fear. Not only does fear put us in fight or flight mode wreaking havoc on our nervous system, we lose the synchronicity with our heart and the integrity with our other faculties, succumbing to lower frequencies that put us in jeopardy. To be clear, I’m not saying to do nothing and allow others to harm you. Such is never condoned. Instead, take the necessary steps to ensure your safety while doing so with equanimity, calm and resilience. Be aware of what you are faced with and do not let fear overwhelm you. Ground yourself and stay centered in your heart. Coming back to the heart and connecting to love is critical.

An Opportunity For Ancestral Healing

Sometimes physical and emotional disorders are not even a consequence of what happened to you in this life. They could have been inherited through your ancestral lineage. In the same way we physically inherit DNA from our forebears, we also inherit their cellular memory on an emotional and psychic level. Unhealed ancestral trauma is passed on. Energy is neither created nor destroyed but merely changes form. When confronted with dark emotions and even curses, it can sometimes open the gate to profound ancestral healing. In my journey I discovered miasmas that were part of deep feminine wounding in my lineage through violation and betrayal. As I healed I was able to also clear these impediments in my lineage – through spiritual counseling, energy work, journaling, mediation, mediumship and ritual. I am no longer burdened by the heavy karma associated with ancestral wounding and am able to integrate their wisdom
instead.

Create Sacred Space And Get Support

Since I had left my work I was fortunately able to make time and space for healing. I felt blessed to have a team of amazing doctors, healers, intuitives and mentors. I was able to recover with a combination of allopathic and integrative medicine, a very clean diet consisting of mountains of organic fruits and vegetables with herbal supplements, as well as energy realignment and homeopathy. Last but not least I had a wonderful spiritual counselor who supported me emotionally.

There are many gifted practitioners of alternative medicine and esoteric modalities based on ancient wisdom. In our brass tacks world they seldom get the attention they deserve. It’s important to find trusted and high integrity practitioners as there certainly are questionable ones out there. Looking back, even though it was tough, going through my healing journey alone was important. When you hold sacred space for yourself by being completely present without distraction, you’re able to plumb the depths of your soul. In my case it was ironically a sort of urban vision quest in a New York City apartment. Since I could not be in nature, that was the next best thing. The more work you put into your healing, the more you will benefit, even if it feels hopeless at times. The hard work is absolutely worth it and no one else can do it for you! 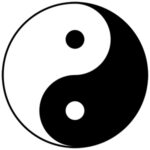 Dark and Light Are Part Of The Integral Whole

Dark and light polarities exist within and without every living and non-living thing. We are part of a dualistic realm. We’re also moving into an era when we are increasingly able to perceive the continuum between self and world, and concurrently embody and operate from both our individual identity and unity consciousness. This is the process of Ascension, humanity’s collective rite of passage.

Although the diseases and dark afflictions were my bane, they were also the foil against which I was able to become one hundred percent aligned with my true self. You can say that I was compromised because I was not living my true purpose, and you can also say that I couldn’t live my true purpose because I was compromised; both statements are true. That is elevation through integration. Herein lies the secret to resolving polarities which can help us gain new perspective on the societal and global challenges we face. The yin-yang symbol beautifully illustrates this innate paradox of life, where opposing forces are also complementary and interdependent in the natural world. In the darkest dark there is a point of light, and in the brightest light, there lives a spot of darkness. Each contains the other in an interconnected flow of ever-emergent change.

May we all shine more brightly by reconciling with our collective shadow during this time of accelerated transformation on the planet. 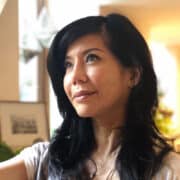 Stephanie is the former President of The Alchemist’s Kitchen and former Director of Evolver. Inspired by a deep respect for ancient wisdom traditions and our shared connection with the planet we inhabit, she is a passionate advocate for authentic empowerment and conscious transformation through radical integrity of the heart, mind, body and spirit. A native Hong Konger, Stephanie is a mystic entrepreneur and storyteller that left a successful career in finance and film for a path of consciousness and wellness. Learn more at stephaniewang.com and follow her at @stephaniewang5d on Instagram.