“Crocus and Smilax may be turn’d to flow’rs,

And the Curetes spring from bounteous show’rs

I pass a hundred legends stale, as these,

And with sweet novelty your taste to please” – OVID

Saffron is a fascinating herb with deep, ancient roots that has been worked with as a spice, medicinal ally and a plant dye for thousands of years. It is one of the oldest herbs ever utilized for medicinal purposes, appearing in both modern day and ancient pharmacopeias in western, Indian and Middle Eastern traditional healing practices. Yielding from  the bright orange stigmas of the Crocus Sativa plant, Saffron is said to have almost 100 medicinal gifts, is worked with therapeutically, and is added to foods for its distinct and beautiful aroma and flavor. It is also used in spiritual and ceremonial contexts.

The writings of ancient healers Galen, Pliny the Elder and Hippocrates describe saffron as a panacea-like herb. It was used to treat or support a variety of conditions, including coughs, colds, stomach ailments, insomnia, depression, fever, heart trouble, and fertility. Today, saffron is one of the most precious and  expensive herbs and spices sold on the planet. Unfortunately, Saffron is also becoming increasingly scarce as climate change and overproduction have started to threaten its future proliferation.

Saffron (Crocus sativus; Iridaceae), originates from the Arabic word ‘za-faran’ meaning yellow. It gives its gifts from the dried orange/red stigmas which accumulate more than 150 volatile and aroma-yielding compounds. These contribute to the color, bitter taste  and aroma that make saffron so distinct. The crocus is a genus in the Iris family, which comprise of of approximately 80 species. Many kinds of lovely crocuses are cultivated for their flowers in autumn, winter, or spring — the crocus sativus is for the very exotic and expensive cultivation of saffron. Crocuses are native to woodland, scrublands and meadows from sea level to the tundra in North America, central and southern Europe, North Africa, as well as the Middle East, the islands of the Aegean Sea, and across Central Asia to western China. We look forward to the appearance of crocuses here in New England as the snow melts. These beautiful beings among the first blooms to let us know that spring has arrived.

The price for saffron now estimates in range from $1,000 to $5,000 per pound  because it takes almost 5,000 crocus flowers to yield 1 oz of dried saffron threads. The harvesting of saffron is done entirely by hand during one magical week a year. It’s amazing that crocus has made its way into so many hands given its rare and precious cultivation and harvesting.

Saffron in History and Mythology

Humanity’s connection to this herb goes back quite some time. In prehistoric sites in Iran dating back  50,000 years, cave wall depictions contain saffron-based pigments, indicating that humans have had a very deep relationship with saffron since Paleolithic times. Ancient frescoes dating back at least 3000 years on the Greek island  of Thera show depictions of a goddess presiding over the manufacture ring and use of the saffron flower. Frescoes dating back to 1600 BC in Knossos, Greece and from 1500 BC in Santorini, Greece portray the process of the saffron harvest, and it in ritual worship. In Thebes, Egypt, a medical papyrus dating to 1600 BC alluded to the medicinal gifts of saffron. This herb was sacred the the goddess Hecate and worked with in devotion to the god Dionysus. Even Cleopatra loved saffron and used it to give her skin a golden color and romantic aroma.

A Greek legend about the crocus details the love affair of Crocus and Smilax, and explains the plant’s vivid color. Crocus, a handsome and virile man, fell in love with a nymph named Smilax. During a brief period of idyllic love and passion, Smilax, flattered by his amorous advances, was under the spell of his devotion. But soon Smilax, became bored by Crocus’ attentions. After he continued to pursue her against her wishes and became obsessed with with her, Smilax bewitched him, transforming Crocus into a saffron crocus flower. With its bright orange stigmas, it is said this remains a symbol of Crocus’s undying passion and eternal flame of love for Smilax

Saffron was considered a luxury for the nobility historically. Kings, queens, pharaohs and monks wore saffron perfumes, donned saffron-dyed robes, ate aromatic saffron dishes and enjoyed drinks infused with saffron. They also bathed in saffron water for healing wounds. As prelude to romance, as it was noted to be quite the aphrodisiac. They also slept comfortably in beds donned with saffron threads, and prayed to their gods with saffron. Saffron crocus is the krakom indicated in the Bible in Solomon’s Song of Songs. It is krokus in the writings of several Greek authors such as Hippocrates, Sophocles and Homer. Ovid, Virgil and other Roman poets also made saffron the star in their poems. Iran’s famous poet Ferdowi mentioned in his poems the use of saffron in triumphant celebrations. Kashmiri poet and Mohammed Yusuf Teng pointed out that cultivation of saffron had long been mentioned in Kashmiri Tantric Hindu epics in the past.

The trade for saffron also became very lucrative. Egyptians, Romans, Arabs, Europeans and Asians engaged in this trade, and saffron came to be widely distributed in these times, by trade, and by smuggling. During the pandemic Black Death (Bubonic Plague) in the 14th century in Europe, saffron played a very significant role in trade history. Regulations had to be made to ensure equity in market prices and purity of the shipments. The Safranschou code was established and fraud was deemed punishable by fines, imprisonment, and death by fire. Oh my.

To this day, saffron is used in various religious ceremonies. Tibetan Monks use it for prayer and blessing. Calligraphers have used saffron to write religious books such as the Koran.

The Medicinal Benefits of Saffron

Saffron’s chemistry is extraordinary. It contains over 150 volatile and aroma-yielding compounds. As a therapeutic ally, it is considered an excellent aid for stomach ailments, is antispasmodic, and helps digestion and increases appetite. It is also helps relieve renal colic, and reduces stomach aches and relieve emotional tension. During the last 20 years it has been used as a drug for flu-like infections, and as a sedative. It is also considered to be a reproductive and fertility tonic and in small quantities can help regulate a woman’s menstruation and aid in conception. Like it was thousands of years ago, saffron is still used to help reduce fevers, cramps and enlarged livers, and  especially to calm nerves and ease depression. In the western world it is used primarily as a spice. But regular intake of this extraordinary herb for a period of time could help the body to build resistance against a lot of common diseases such as asthma as well as common colds and flu.

Research on Saffron’s healing gifts has been promising. In a detailed article by Green Med Info, the following is shared:

The researchers conducted a randomized, double-blind, placebo-controlled study of people with early stage AMD.  One group in the study supplemented with 20 mg per day of saffron. After just 90 days the researchers saw significant improvement in the saffron group.[ii]

The researchers noted that saffron contains crocin and crocetin, two antioxidant derivatives of carotenoids. Crocin protects photoreceptors from light-induced death.  Crocetin increases the availability of oxygen to the cells.

Saffron is considered safe and effective in helping moderate Alzheimer’s disease. In a randomized placebo-controlled trial, 46 patients with probable Alzheimer’s were given either a placebo or 15 mg of saffron twice per day.  After 16 weeks, the saffron group had significantly better cognitive function than the placebo group.

In fact, it is as effective as the Alzheimer drug donepezil (Aricept).  In a multicenter, randomized, double-blind controlled trial 54 AD patients received either 30 mg of saffron a day or 10 mg of Aricept. After 22 weeks the saffron group did just as well as the Aricept group with fewer side effects.” How to Work with Saffron

Make sure saffron does not interact with any medications you are taking. Saffron is not recommended during pregnancy and breastfeeding.

Otherwise you can steep the threads in hot water or broth for 5 to 20 minutes and cover the water to keep in the volatile oils. This releases saffron’s essence and aroma. The threads will continue to release color and flavor for 24 hours. After soaking you can add them to your recipe. Saffron is commonly added to risotto or other rice dishes. It also goes well in seafood dishes like bouillabaisse or paella.  You can also use it in stews or sauces. Make sure to store your saffron threads in an airtight container in a cool dark place. It should last for years.

Saffron is only cultivated in a few places around the world with the most precious yields coming from Kashmir. Unfortunately, overharvesting and moncropping have posed a threat to the future proliferation of Crocus Sativa. Celebrating and speaking about this plant’s value cannot be understated. Hopefully, plant lovers and farmers who are capable of continuing to provide this valuable medicinal will do so in a way that guarantees that future generations will have access to this extraordinary and sacred healing friend.

Ilana Sobo is an artist, community herbalist, and Ayurvedic Practitioner in the Greater New York City area.  Ilana’s greatest passion is to help steward the plants of Gaia and do her part to share  the love, magic and healing gifts the natural world brings forth to share. Please visit her at shaktibotanica.com to connect and learn more about Ayurveda, herbs and her photography project to contribute to United Plant Savers whose mission is to’ protect native medicinal plants  and their  habitat while ensuring an abundant renewable supply of medicinal plants for generations to come.’ 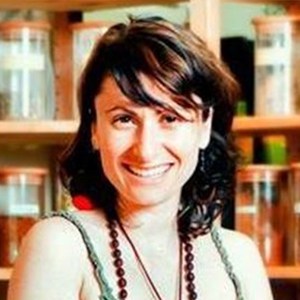 The Dao of Health: An Interview with Herbalist Inga Bylinkina