Functional mushrooms have been used throughout history for their wide variety of health benefits. Made in tinctures, teas, powders, and supplements, the extent of their use is long-standing, highlighting the powerful healing potential of fungi. Turkey Tail, a multi-colored functional mushroom resembling turkey feathers, has been one of the primary mushrooms used for centuries to treat various ailments.

What is Turkey Tail Mushroom?

Turkey Tail or Trametes Versicolor displays disc-like shapes in various colors and shades, including brown, grey, white, and orange. In Japan, it is known as “kawaritake” or “cloud mushroom” because of its natural layered shapes. Growing off of deadfall like fallen trees, this polypore mushroom fruits in wooded areas or forests. Although famously known for its immune-boosting benefits, it has been found to aid in varying ailments such as respiratory issues and digestive problems. 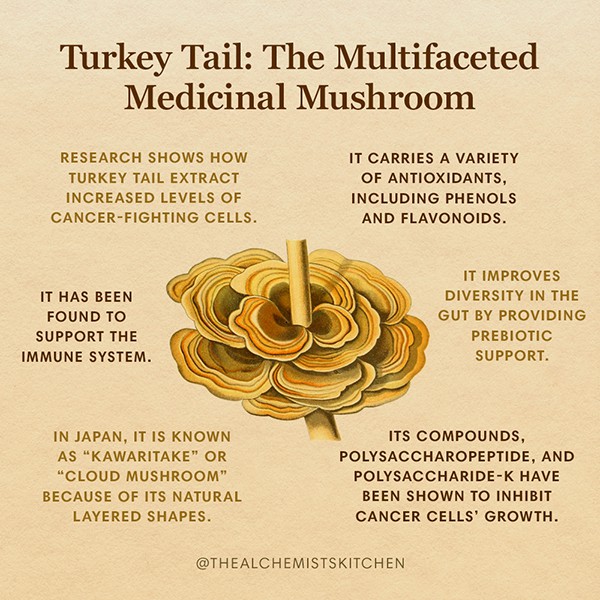 Representing spiritual wellness, health, and infinity, it symbolizes longevity in many Asian cultures. It’s been used in Traditional Chinese Medicine (TCM) for centuries to support lung and liver health, as an immunomodulator, and to help combat infections. Additionally, Turkey Tail extract, otherwise known as “Yun Zhi” in Chinese, is used to treat respiratory conditions. It also has a long-dated history in Japan, where it is used in Japanese Folk Herbalism to promote cellular growth. 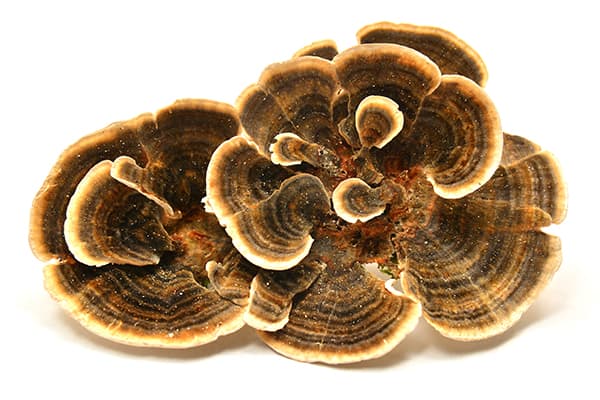 It has been found to support the immune system. Studies have shown that the natural polysaccharides in Turkey Tail can assist a healthy immune response. This medicinal fungi carries a variety of antioxidants, including phenols and flavonoids. Moreover, a single Turkey Tail extract was discovered to have over 35 different phenolic compounds and flavonoid antioxidants. These compounds help aid the immune system even further by regulating inflammation.

The gut is often referred to as “the second brain.” It influences our overall health and wellbeing. It has also been appreciated for its positive effects on the gut microbiome due to it containing prebiotic fiber. Prebiotics feed probiotics, which promotes gut health through activating various functions of your gut flora. Studies show that Turkey Tail supports the gut by improving diversity in the gut by providing prebiotic support.

Some research has shown that it may have cancer-fighting potential. In Japan, it has been approved for cancer treatment. Its compounds, polysaccharopeptide (PSP), and polysaccharide-K (PSK) have been shown to inhibit cancer cells’ growth. Contributing to this finding are the studies using it in the treatment of colon cancer, stating that it may also stop cancer cells from traveling and effecting other healthy cells. Furthermore, other research shows how Turkey Tail extract increased levels of cancer-fighting cells. This growing body of research will allow us to understand the capabilities of Turkey Tail in the treatment of cancer.

It is considered safe, but there have been a few side effects reported. Digestive symptoms, such as gas and bloating, have been experienced. When used in conjunction with chemotherapy, patients have reported nausea, vomiting, and loss of appetite. Darkening of the fingernails has also been reported when consumed. Although generally safe, It’s always important to consult with your doctor before taking any supplements. 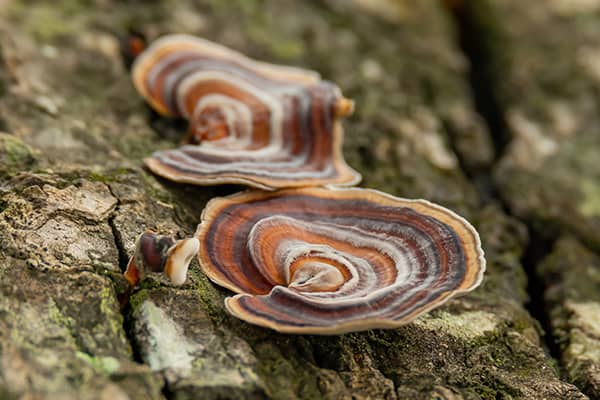 Extracts have been used in several clinical trials. To receive the full benefits, it is best to consume an extract that is dual extracted, or both alcohol and water extracted. Extracts are potent and ideal for long term use.

When it comes to mushrooms, the polysaccharides are best extracted in water. You can prepare a tea with a hot water concoction, or mixing the mushroom powder with hot water is a quick and easy way to prepare the tea. Mushroom tea can be a hydrating and gentle way to incorporate medicinal mushrooms.

Where to Buy Turkey Tail Mushrooms

As interest in functional mushrooms grows, mushroom grow kits, and cultured syringes have become easily accessible. Of course, you can still purchase it at Chinese markets and herbal apothecaries. We also have a wide array of medicinal mushrooms. Our variety of Turkey Tail elixirs, powders, and supplements are from trusted sources such as Catskill Fungi, Host Defense, and Forest Folk Fungi. Check out our full list of mushroom products here.

Can you take too much Turkey Tail?

When taken as advised, it is a safe and effective option for improving health. However, adverse reactions can occur when you take more than the suggested or recommended dose. Always look at the suggested serving size before consuming any supplements.

They may have immune-boosting properties that aid in cancer treatment. In conjunction with other cancer treatments such as chemotherapy, it has been shown to inhibit cancer cells. The research on Turkey Tail continues to show promise in the treatment of cancer.

Medicinal mushrooms are distinct from poisonous mushrooms. It is not poisonous but may have undesired side effects. 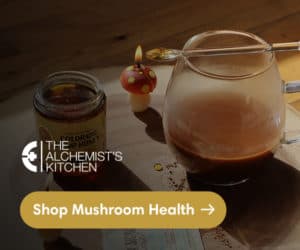 What is Ancestral Healing? And why is it so important?

How To use Herbs as Magical Protection