Spring is the perfect time of year for a gentle detox. Think of it as spring cleaning for your body! As the seasons change, we naturally change with them. The days become brighter and longer and the weather gets warmer, while we choose lighter clothing, foods and drinks. These times of seasonal change are the most potent times to undergo a detox, which should incorporate our herbal allies as well as reasonable dietary modifications.

Choose spring fruits and veggies while easing up on dairy, processed snacks, fatty meats, grains, and sugary sweets. Our systems can be sluggish and slow after a long winter of heavy meals, hours spent indoors, and an overall more sedentary lifestyle. Start fresh with an herbal spring detox and enjoy renewed energy, clear skin, a clear mind, and overall vibrant health! Cleavers For Clearing Out The Pipes

Cleavers (Gallium aparine) is a lesser known springtime herb, often discounted as a garden weed. It has thin, finger-like leaves with tiny hairs that cling to fur and clothing. As an “alterative” herb, cleavers helps to restore proper function to the body and promotes elimination of waste and toxins through our major channels of elimination: liver, lymph, kidneys, skin, and lungs. Cleavers are also considered a “lymphatic” herb because they are high in a compound called coumarins, which stimulates contraction of the lymphatic vessel walls, leading to faster and more complete elimination of waste from the lymph through the kidneys. Cleavers can alleviate acne, bloating, kidney and bladder issues, and deficient immune response. Fresh cleavers may be ingested as a juice, prepared as a hot or cold infusion (long steeped tea), or as a tincture. Red Clover for Cleansing the Blood

Red Clover (Trifolium pratense) is a gentle yet powerful herb which has the ability to filter and carry toxins out of the bloodstream. Its abundant reddish purple little blooms can be seen cropping up in early spring, around lawns and fields. Red Clover, like Cleavers, also has a tonic action on the lymphatic system and helps the body to eliminate waste through diuretic action. Red Clover stimulates the liver as well, encouraging bile production and aiding in the detoxification process. Interestingly, Red Clover is phytoestrogenic, and can bind to estrogen receptors. The phytoestrogens are weaker than regular estrogen, which can be beneficial in regulating hormonal issues and during menopause when estrogen is low. This action, combined with the ability to cleanse the blood and stimulate the lymphatic system and liver, makes Red Clover a wonderful choice for an herbal spring detox, and has a noticeable clearing effect for many skin complaints. Red Clover may be brewed as an infusion, or taken as a tincture. Nettle as an Antihistamine

Nettle (Urtica dioica), also commonly known as “Stinging Nettle,” is an herbalist’s indispensable ally, and one of the first greens to greet us in the spring. Just be sure to take care when harvesting — the sting, though antihistamine in action, is no joke! Nettles are rich in minerals and vitamins, like calcium, iron, chlorophyll, boron, and vitamin A. Studies show that Nettle tea alone can supply 90 – 100% of dietary vitamin A. Nettles have a diuretic effect and lend extra support to the kidneys in clearing waste. Nettles also have potent antihistamine action, which helps soothe inflammation in the body and calm an overactive immune response. In this manner, Nettles may be a wonderful remedy for arthritis, autoimmune diseases, acne, eczema, psoriasis, kidney and bladder issues, and allergies. Yes, Nettles will help to alleviate those awful springtime allergies too! Enjoy Nettles as a pesto, eaten cooked or steamed as a green, drank as an infusion, or taken as a tincture. Dandelion for Liver and Gut Support

Dandelions (Taraxacum officinale) are a much maligned weed, and we see them everywhere come spring, from cracks in the sidewalk and the side of the highway to our own backyards. Though they’ve got a bad reputation, dandelions are an amazing medicine and masters of detoxification. The whole plant — flowers, leaves, and root — can be used to support and nourish our bodies. The flowers are high in antioxidant flavonoid content, and young flower heads may be eaten, brewed as a tea, or even made into wine. The tender spring leaves may be picked and eaten, and are high in potassium, zinc, and vitamins A, B, and C. The bitterness of the leaves stimulates the liver and gallbladder, which improves these detoxification pathways, and aids in digestion. The root is perhaps the most widely used part of the plant in herbal medicine. It contains inulin, which feeds beneficial bacteria in the gut as well as having a tonic effect on all the digestive organs. Dandelion root also increases the production of bile, which flushes out waste and helps to restore liver cells. The root is often roasted and boiled to make a decoction, and may also be enjoyed as a tincture. Ground Ivy (Glechoma hederacea), also known as “Creeping Charlie,” is another easy-to-miss evergreen weed with tiny purple flowers. Though many avidly pull Ground Ivy out of their lawns, this member of the mint family has much medicinal value. The aerial parts of Ground Ivy provide support to liver clearance and function. Like many detox herbs, Ground Ivy is also diuretic and aids in removing waste through the urinary tract and kidneys. Likewise, it is an expectorant to the lungs and sinuses, which may help with mucus-inducing spring allergies as well. Ground Ivy’s truly astounding medicinal use is its ability to remove lead and other heavy metals from tissues and body systems, working gently but incredibly effectively. It is a stellar herb for those suffering from lead poisoning or anyone in need of heavy metal chelation. It should be noted that Ground Ivy has a slightly stimulating effect on the thyroid, which is beneficial in cases of hypothyroidism, but it is contraindicated for hyperthyroidism, or overactive thyroid. Ground Ivy is best used as a tincture. 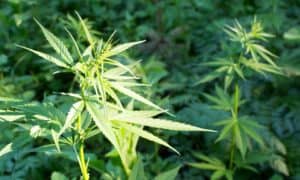 Bonus Herb: CBD as an Antioxidant

CBD (cannabidiol) has been researched for its ability to act as a powerful antioxidant. While many detox programs help you flush toxins from your body, CBD could assist your body’s natural process of destroying toxins. The detoxification process can oftentimes be very difficult on the body. CBD has been shown to interact well with the immune system which could help you stay healthy while on your detox. Additionally, some receptors of the endocannabinoid system are found in the gut. CBD can assist in restoring your gut from damage done by consumed toxins. CBD comes in many forms including tinctures. CBD tinctures are easy to incorporate alongside your other detoxing herbs as they can be taken under the tongue or added to food and beverages.

Looking to detox (we feel you!) this spring? We recommend the Stress Less Tincture and Wooden Spoon Allergy Assist.