Look no farther than Damiana’s botanical name, Turnera aphrodisiaca, for confirmation of its most celebrated action: as an aphrodisiac! More so, it is one of those herbs that provides awareness of being in our bodies and reminds us of the pleasure of being embodied. A gentle, tonic herb, Damiana is suitable for nearly everyone. It works on several levels to relax the nervous system, reduce pain and tension, elevate mood, and increase sensory capacity. 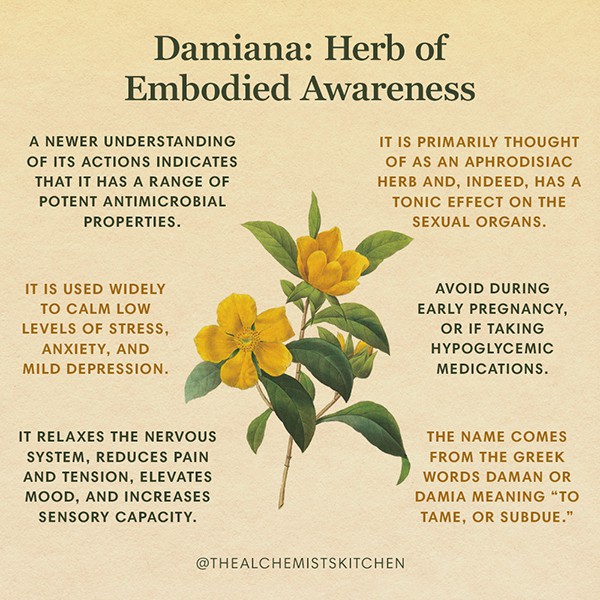 It is a small, subtropical shrub that grows to heights between about 3 and 6 feet. It bears pale green, serrated, aromatic leaves about 4-10 inches long and 5-petaled, bright yellow flowers that grow in the leaf axils. The flowers give way to small, edible fruits, said to taste like fig. You can use the leaves medicinally, they should be gathered while the plant is in flower.2

There are two species of Damiana used and considered interchangeably — Turnera aphrodisiaca and Turnera diffusa — both have almost indistinguishable appearances and aromatics. The Turneraceae family is mostly comprised of tropical or subtropical shrubs and small trees and encompasses about 10 genera and 120 species.4

The origin of the common name, Damiana, comes from the Greek words daman or damia meaning “to tame, or subdue.” Damiana, the feminine version of this word, infers that this herb is the force “who tames.”1

It has been used for millennia by different cultures and peoples throughout the world as an aromatic, a flavoring agent, a general health tonic, and a source of medicine. Traditional applications of this herb include as an antidepressant, cough suppressant, mild laxative, aphrodisiac, tonic, and diuretic. Damiana has been used widely for conditions such as depression, anxiety, sexual dysfunctions, bedwetting, bronchitis, gastric ulcers, menstrual irregularities, constipation, asthma, neurosis, diabetes, dysentery, dyspepsia, headaches, stomachaches, and syphilis.5

It is native to southwest Texas, Mexico, the Caribbean, Central America, parts of South America including Brazil, and the Caribbean islands. It was highly valued by the Mayans, who drank leaf infusions of the herb as a tonic beverage and for libido enhancement, excessive giddiness, and to right loss of balance, or vertigo.1 The Guaycura peoples, indigenous to the Baja region of Mexico, also regularly used Damiana, as it once grew there in abundance. The Guaycura enjoyed it in a similar fashion to the Mayans, imbibing the tea and burning the leaves for aromatic purposes. It became more widely distributed when the Guaycura, isolated from other peoples for centuries, began trading with the Aztecs.4

Damiana was first introduced to the U.S. herbal pharmacopeia around 1874 by Dr. F. O. St. Clair, who obtained it from the U.S. Consul at Cabo San Lucas. The consul became aware of the herb due to common local use by Mexicans, who had come to drink the herbal infusion as an alternative to coffee or tea, for its gently stimulating and health-promoting effects. Mexicans also used it to flavor liqueurs, and it is the original flavor of the Margarita.5

From 1888 to 1947, Damiana leaf and Damiana-based elixirs were listed in the National Formulary of the United States, indicated for improving sexual function in adults. In Germany during this time, the tea was used to relieve excess mental activity and nervous debility, and as a tonic for the hormonal and central nervous systems. The British Herbal Pharmacopoeia cites indications for the use of Damiana as “anxiety neurosis with a predominant sexual factor, depression, nervous dyspepsia, atonic constipation, and coital inadequacy.”2

It is primarily thought of as an aphrodisiac herb and, indeed, has a tonic effect on the sexual organs. Considered to be ‘yang nourishing’, Damiana works to mimic some actions of testosterone, to “provide a generally stimulating and enhancing influence on those functions that relate to the reproductive system.”5 It is gently warming and stimulating to the reproductive system, and has been shown to broadly improve libido6 and impotence, balance hormonal issues, and control premature ejaculation7. Damiana improves circulation to the pelvic region and can strengthen menstrual flow in cases of delayed and painful menses.

In one study done in Italy, it was shown to produce significant improvement in the sexual function of impotent rats. The study concluded that “[Damiana] may act by increasing central noradrenergic and dopaminergic tone, and possibly (indirectly) oxytocinergic transmission.” It also induced relaxation of the corpus cavernosum, and the volatile oils of the herb may irritate the urethral mucous membranes, leading to arousal.1

Similar to its aphrodisiac effects, Damiana can be consumed to achieve tranquilizing and slightly euphoric sensations. It is used widely to calm low levels of stress, anxiety, and mild depression. It has long been an effective ally in the management of various Central Nervous System disorders. Indian researchers have extracted and isolated the known anxiolytic compound apigenin from Damiana leaf, pinpointing a phytochemical marker of this herb’s stress-reducing effects.3 In Germany, Damiana extracts are still used to relieve anxiety, nervousness, and excessive mental chatter. It has a stimulating, warming, and antidepressant quality. This makes it quite helpful for those who feel lethargic, stuck, depressed, cool, and heavy. The nature of its effects is definitely more noticeable when one is feeling down, out of sorts, grumpy, angry, or upset. As those who regularly use Damiana describe it, this herb gives one an overall “natural feeling of well-being.”2

A newer understanding of its actions indicates that it has a range of potent antimicrobial properties. Additionally, it may improve the efficacy of antibiotics, which has the potential to be very useful as cases of antibiotic resistance are on the rise. Eugenol, one of the most well-known phytochemicals of Damiana, has been shown to produce a wide range of antimicrobial effects, including against fungi of various sorts: wood-decaying fungi, plant-pathogen fungi, and, excitingly, human pathogenic fungi. Eugenol reportedly has the ability to disrupt the cell walls of both fungi and bacteria in the human body. One study investigating the effects of Damiana on MRSA (Multidrug-resistant methicillin Staphylococcus aureus) found that “the results obtained indicate that [plants in the family of] Turneraceae could serve as a source of plant-derived natural products with antibiotic resistance-modifying activity to be used against multi-drug resistant bacteria as MRSA strains acquired from hospital and community.”3

Damiana is non-toxic to animals and humans and is generally considered safe for consumption. Avoid during early pregnancy, or if taking hypoglycemic medications. It may increase the effectiveness of these drugs leading to extremely low blood sugar. As always, consult with a trusted herbalist or physician before taking herbs regularly.1

Like all plants, it has infinite possibilities for use and application! Here are some of the more common, accessible methods we use in the practice of modern-day herbalism.

Tea is the most traditional preparation of this herb, and a wonderful way to enjoy its effects! You can enjoy Damiana tea throughout the day, as a way to increase positive feelings and embodied awareness or to unwind and relax. It’s also great before or after meals as a digestive aid.

To make Damiana tea, simply infuse 1-2 teaspoons of the dried herb in hot water, covered, for 10-15 minutes. Strain, and enjoy!

It makes a lovely, delicious elixir; and there are countless elixir recipes that call for this herb! Damiana enhances the effects of spirits in a pleasant, stimulating way.

To make a Damiana elixir, soak about 1 ounce of dried Damiana leaves in hard alcohol of choice (vodka, brandy, tequila, etc) for about a week, shaking daily. Strain, reserve the alcohol, then slowly simmer the soaked leaves in about 12 ounces of spring water until the liquid is reduced by half. Strain the leaves out, then add 1 cup of honey to the warm water, stirring until dissolved. Then, stir in the Damiana-infused alcohol. You have a Damiana elixir! Add other yummy amendments like chocolate syrup, rose water, vanilla extract, cinnamon, ginger, etc. Enjoy by the spoonful.

It is often added to herbal smoking blends or smoked alone for the stimulating, gently euphoric effects, and the embodied feeling it promotes.

To smoke, roll the dried leaves in a rolling paper or add them to a favorite pipe. It pairs well with other smokable herbs and is flavorful and adaptable in blends.

Damiana has been somewhat over-harvested in its native range, where it once grew very abundantly; most of the Damiana on the market today comes from Mexican and Latin American cultivation projects. Growing it out of its native range is possible, and it can be grown from seed; it will thrive in plant hardiness zones 9 through 11. If growing Damiana isn’t possible, another option is purchasing it from reputable local businesses. For example, a neighborhood herb store or a trusted, small business on the internet. You can find several carefully selected, intentional herbal products with Damiana at The Alchemist’s Kitchen. My favorites include this Love Stoned tincture with CBD Oil and this For Play intimate oil, also with CBD, both by Plant Alchemy. Honorable mentions go to these two super delicious elixirs, this Euphoria Aphrodisiac Love Tonic by Anima Mundi and this Chocolate Love Sensual Elixxxir by Herbal Revolution. 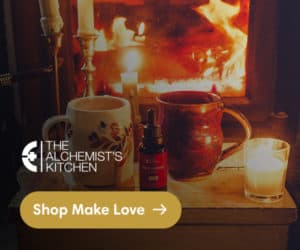