Schisandra (Schisandra chinensis) is an intriguing berry indeed! Hailing from its home in the lush, mountainous regions of China, we know of its many medicinal merits thanks to a long history of use in Traditional Chinese Medicine (TCM). It is an adaptogen and a tonic herb often used to promote longevity and vitality, balance liver conditions, control blood sugar, aid in digestive processes, support the immune system, and help with memory and focus. 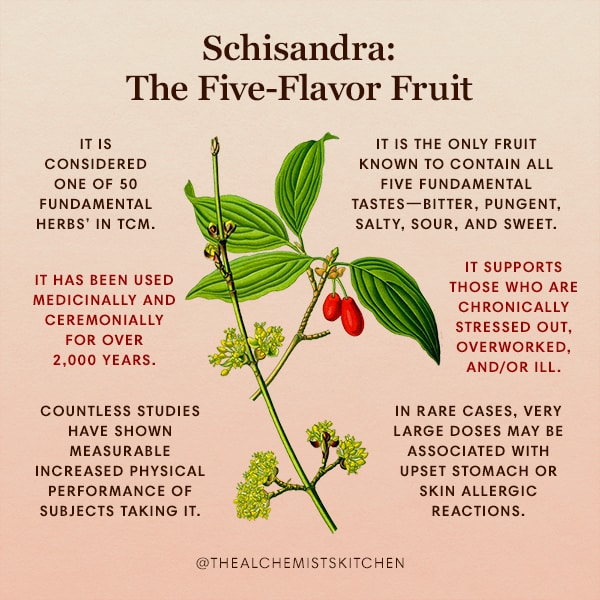 Schisandra berry’s Chinese name, wǔ wèi zi, means “five flavor fruit.” It earned this name because it’s the only fruit known to contain all five fundamental tastes—bitter, pungent, salty, sour, and sweet. According to TCM theory, this unique composition supports the 5 zang organs, or the liver, kidneys, heart, lungs, and spleen. This cooperative of zang organs produce and store qi, the vital energy or life force that flows through all living things.5

The western botanical name, Schisandra, comes from the genus Schisandraceae, which was named by French botanist André Michaux in his “Flora Boreali-Americana,” published in 1803. Sometimes it is incorrectly spelled Schizandra, which is a misunderstanding of origin. According to the American Herbal Pharmacopeia, “[The name Schisandra] is derived from the ancient Greek schisis meaning “crevice” or “fissure”. Many writers have incorrectly written this as Schizandra presumably from the Greek schizo meaning “split” or “separate” which has resulted in inconsistencies in the literature. This is further confused as “Manual of Cultivated Trees” [published in] 1954 reported that the name Schisandra was in fact based on the verb schizo.”1

Though there are 38 species of schisandra in China, for the purposes of this article, we’ll focus on Schisandra chinensis, the primary species in trade in western herbalism. It is a deciduous, perennial, woody vine, which grows to lengths of about 30 feet. It is hardy to zones 4-8, and isn’t frost tender. In addition, it is dioecious, and blooms with small, white to bright pink flowers from April to May. The dark green leaves are tough, glossy, elliptically shaped and alternately arranged. The bright red, ovoid berries grow in dense hanging clusters, and ripen in autumn. All parts of the plant have a bright, citrus scent. It prefers habitats of mixed forests, especially on the margins, by streams and brooks, and usually can be found in sandy, moist soils. This plant likes both the full shade of deep woodlands or partial shade of light woodland.4

Schisandra has been used for millennia by many beings for food and medicine. Indigenous peoples of the Asian continent have used it medicinally and ceremonially since before recorded history, for over 2,000 years.

Schisandra berries are a wild fruit of the Manchu’s mountain forests, and native to Northern China, Russia, and parts of Korea. However, for centuries now, they’ve been cultivated by farmers of these regions. Typically, its berries are dried in the sun and consumed as part of food and medicinal practices. Traditional Chinese Medicine says that it “calms the heart and quiets the spirit,” and this berry has been part of herbal formulas for thousands of years. Nanai (Indigenous Siberians) hunters have traditionally consumed its berries to help improve stamina and reduce fatigue in the rugged terrain during the long winter months.3

Recorded use of Schisandra dates back to the Tang dynasty, first described in China’s first known herbal encyclopedia, “Shen Nong Ben Cao Jing,” or “The Divine Farmer’s Materia Medica,” written and compiled between about 200 and 250 CE.5 It is considered one of 50 Fundamental Herbs’ in TCM. Chinese, Korean, and Russian cultures have used its berries in a number of ways; in beauty tonic blends, as an ingredient in soups and stews, and infused into wines. Awareness of it reached the European and American countries relatively recently; the first monograph on it can be found in The American Pharmacopoeia from 1999.1 Nowadays, despite its presence in the current pharmacopoeial documents, Schisandra and its myriad offerings are still largely unknown. 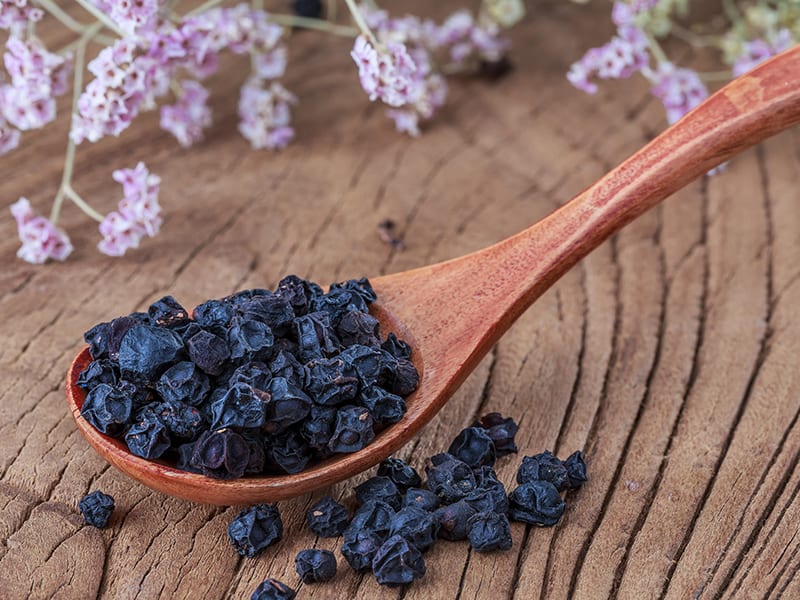 Because it has all five flavors, its energetics are balanced. Some herbalists, myself included, would call this herb “amphoteric,” meaning it can provide the energetics needed to balance each person’s unique pattern of disharmony. It also has many herbal actions; it is adaptogenic, astringent, hepatoprotectant, anti-inflammatory, antioxidant, antibacterial, trophorestorative, expectorant, antitussive, immune modulating, nervine, sedative, strong vital stimulant, aphrodisiac, blood sugar regulator, blood pressure regulator, emmenagogue, and oxytocic.2

It has long been prized for its energizing and vitality-enhancing properties. Countless studies have shown measurable increased physical performance of subjects taking it. Since it is a tonic herb, it strengthens and tones many organs in the body, benefiting the flow of energy, or Qi. Additionally, it is an adaptogen, a type of herb that supports bodily resistance against physical, chemical, and biological stressors. Schisandra also modulates endocrine and immune functions. As an adrenal-cortical restorative, it supports those who are chronically stressed out, overworked, and/or ill.6 Consult a trusted herbalist for doses, recommendations, and for specific complaints.

Scientists have done extensive research and studies on the liver supporting, hepatoprotectant effects of Schisandra. Demonstrated to lower elevated liver enzymes, it supports the liver’s detoxification process due to its potent antioxidant activity and high concentration of lingans.6 It also helps to protect the liver from the damage caused by toxins and free radicals. These actions improve the overall functioning of the liver, and stimulate the growth of new liver cells. It has been used to successfully treat liver conditions like hepatitis and fatty liver.3

It is one of those amazing herbs that modulates functions in the body; this is especially noticeable in its varied actions on the immune system. In cases of immunodeficient disorders like HIV/AIDS or immunocompromised states caused by diabetes or cancer,  it acts as an immune enhancer. Schisandra is also an immune regulator, and has an anti inflammatory and immunosuppressive effect on the immune system when it’s under the stress of allergic and/or autoimmune reaction.2 This berry is rich in bioflavonoids and vitamin C, both of which help tonify the immune system.

There are no substantiated reports of side effects or contraindications for Schisandra, when used properly. In rare cases, very large doses may be associated with upset stomach or skin allergic reactions. Those with gastric acidity or ulcers may experience increased symptoms. Theoretically, it could interfere with metabolism of pharmaceutical drugs due to its liver metabolizing effects, however this has never been reported.1 As always, consult a physician or trusted herbalist before using any new herb or supplement.

Schisandra’s Methods of Medicinal Use

It continues to be available in a variety or forms. In the western world of herbal medicine, the following preparation suggestions are the most widely used and accessible to obtain. It is usually available as a dried, whole berry.

In traditional preparations, its berries were usually dried in the sun, then pounded into a powder. This powder could then be stirred into water, and drank like a tea, or added to wine, and sipped in small amounts like a tincture. In addition, it could be added to soups, sauces, or sweets; made into a pastille-like pill when bound with honey or molasses, or added to topical treatments for the skin.

To make powdered Schisandra at home, grind up the dried berries in a high powered blender until the desired consistency is achieved. For a more traditional experience, a mortar and pestle may be used to crush the berries instead.

Since it is often in full berry form, to make a water-based infusion, it’s highly recommended to decoct this herb. Decoctions are usually reserved for herbs that are berries, roots, barks, or mushrooms.

To make a decoction, add 1-2 teaspoons of dried berries to 10-12 ounces of water. Gently simmer for 15-20 minutes, then remove from heat to steep for 10-20 minutes longer. Strain, and enjoy!

It also makes a lovely tincture, as it’s both portable and easy to dose. Tinctures are usually an alcohol (at least 80 proof vodka, overproof grain alcohol, or other clear booze) extraction of a plant, however, vegetable glycerine or apple cider vinegar can be substituted to keep it alcohol-free.

To prepare a tincture, pour menstruum of choice over fresh or dried herb (1:2 alcohol to dried berry ratio) into a preferably glass container. Label and seal the jar, shake every day for at least 6 weeks. Strain, and put into a dropper bottle.

It grows in zones 4-7, and is easy to cultivate. So why not try growing it, if it’s accessible and if you have the space! They grow quite like grapes. Another option is to purchase it from reputable local businesses, like a neighborhood herb store or trusted, small businesses on the internet. Several carefully selected, intentional herbal products with Schisandra in them can be found at The Alchemist’s Kitchen. My favorites include this delicious, heart-centered Euphoria Aphrodisiac Love Tonic by Anima Mundi and this powerful, energizing Run the World Supplement by WTHN.