For thousands of years, our ancestors used both functional and entheogenic fungi for spiritual purposes, health benefits, and sustenance. With functional mushrooms like Reishi, Chaga, Lions Mane, and Cordyceps taking the west by storm with their world-renowned adaptogenic, performance, antioxidant, and cognitive abilities. It’s no surprise that mushroom foraging is becoming more popular. Whether you’re just looking to get your hands dirty, or just want to get your eyes on some beautiful species – we’re covering the best places to see these fruiting bodies in the wild.

If you’re a newbie when it comes to wild cultivation, linking up with a local mycology community can give you a head start when searching for the ideal fungi-hunting location. Check out North American Mycological Association for clubs near you. You’d be surprised at how many states are filled with fungi-enthusiasts! Though, if you do decide to go solo, there are some key aspects to look for when searching for the right mushroom habitat. Generally speaking, pastures and wooded areas are ideal for foraging. Pastures are just large grassy areas like fields. The best grasslands are those used for animal grazing but keep an eye out for haystacks or heavy machinery as they typically disrupt the elements needed for mushroom growth.

However, the best areas to search for mushrooms are in the forest. This is because mushrooms play an important role in the decomposition of deadfall or decaying trees. Forests containing Beech, Oak, Birch, or Pine trees are ideal but if you’re surrounded by Sycamore or Elder trees it might not be worth the hunt as these tend to be less productive in finding mushrooms. Another great option are parks, but keep in mind that some parks may require a permit and limit the number of cultivated mushrooms you can take home. Now that you know what to look out for, here are the top 10 locations to harvest functional, edible, and magic mushrooms.

Starting us off is West Chester, Pennsylvania, otherwise known as the mushroom capital of the world. Why? Because a little borough known as Kennett Square produces over 60% of the mushrooms consumed in the United States– that’s 500 million pounds of fungi a year! Rumor has it that this town of mushrooms began around 1885 when two flower growers wanted to take advantage of the extra space beneath their elevated flower beds. That’s where the idea of growing mushrooms came into play. Locals say the two brought back some spores from Europe, hired local Italian workers from a nearby stone quarry, and began growing.

Eventually, the Italians decided to produce the mushrooms themselves and by the 1950s there were hundreds of Italian mushroom growers contributing to its fame as the mushroom capital of the world. Now, you can find Shiitake, Oyster, King Oyster, Maitake, Pompom, Pioppino, and Crimini Mushrooms in this town run by mycelium. 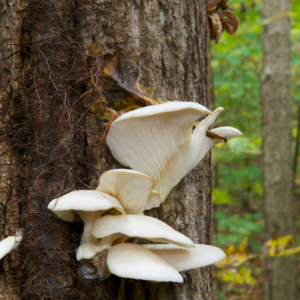 Located just south of Asheville, North Carolina, Hot Springs holds good potential for mushroom foraging. You can find Chanterelle, Chicken of the Woods, Lion’s Mane, Maitake, Morels, Oyster, and Reishi to name a few. Hot Springs is right along the Appalachian Trail where you can find densely wooded areas where you can expand your foraging bag with not only fungi but wild berries and ferns in the spring. Get connected with Asheville Mushroom Club to learn the latest about wild mushroom cultivation in North Carolina.

Central Florida contains a wide variety of mushroom species. You can find Boletes, Puffballs, Chanterelles, Indigo milk-caps and Reishi. In the east of Ocala, Silver Springs State Park connects to the vast Ocala National Forest where you’ll find a majority of the sunshine states oak trees– ideal “food” for mushrooms. 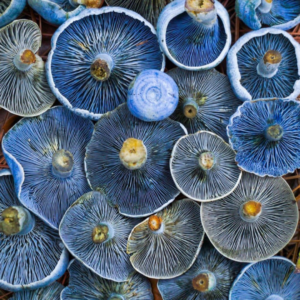 Located just west of St. Loui, Chesterfield is full of fungi. The Missouri Mycological Society is a great resource with chapters in Springfield, Kansas City, and Southeast Missouri. Most known for its fertile soils fruiting morels, these sought-after mushrooms are only grown in the wild, making them popular amongst chefs and mycologists. Every spring, foragers hunt these exclusive fungi to sell to restaurants and the local community.

However, identifying edible morels can be quite the task– morels have deadly doppelgängers. This is why going with an experienced forager or mycologist can help determine a true morel. Morels vary in size and appearance. Their shape and their color can range but they are mostly off-white or gray. You can spot them by their exterior, which resembles a honeycomb with a white and hollow interior.

Known primarily for its wine, Willamette Valley brings people from all across the nation for their truffles. This potent fungi sells for $500 per pound making it another popular reason to visit this wine country. Through winter and spring truffle season emerges with foraging tours, truffle and wine pairings, and more. If you’d like more hands-on experience and education, Willamette Valley Mushroom Society hosts local foraging events as well as study groups, and educational presentations and videos. 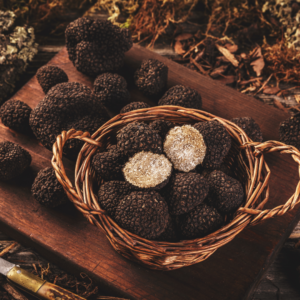 Originally named Seneca Village, wherein the 19th-century it was created as a settlement of mostly African American landowners. The settlement was later also inhabited by Irish and German immigrants and eventually became what is now known as Central Park where all new yorkers can enjoy Central Park’s 800 acres that includes about 25,000 trees. More than 3000 of these trees are oaks which created the ideal habitat for these fungi. Since 2006, the New York Mycological Society has been working throughout the park where mushrooms can be found year-round. They have reported 400 species of fungi, including five different species of chanterelles. 50 Ascomycetes, 100 Crust Fungi, and Polypores have been identified as well.

Home of Catskill Fungi, you can find Chanterelles, Morels, Chicken of the Woods, and more in Upstate New York. Nearby is the Mid-Hudson Mycological Society where you can go to educational events, mushroom walks, and learn ways to ethically forage.When you’re foraging for mushrooms, a positive identification is vital before consuming and several species upstate can seem similar to an edible mushroom. For example, there are plenty of bright orange mushrooms in the forest that can be potentially poisonous. The small details when mushroom hunting are so varied  that misidentification is common.

Located in Ithaca, Cornell Mushroom Club is a suitable resource for those wanting to know the ins and outs of mushroom foraging on the east coast. In the Finger Lakes region of New York you can find morels in spring, king boletes, and chanterelles in the summer months, and giant puffballs in early fall. Various mushrooms can still be foraged through late fall through snowfall under spruce and oak trees. Of the most exquisite and sought after are the morels which can be tough to locate but the State and Federal Forests can be a breeding ground for fungi and foraging is permitted in the parks for personal consumption.

It’s no secret that mushrooms are fruiting in the Bay Area by the plenty. It’s precisely fungi societies have popped up all over the region, with groups like the Bay Area Mycological Society, Fungus Federation of Santa Cruz, and Mycological Society of San Francisco spreading foraging and fungi education in popular foraging sites like Point Reyes National Seashore, Salt Point State Park, and Big Basin Redwoods State Park. While in these forests and parks, you may come across some Chanterelles, Amanitas, Russulas, and Boletes under oaks. Oyster mushrooms can be found on streamside alders and big-leaf maples. 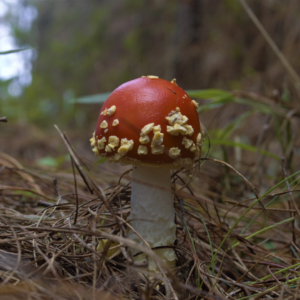 Hunting wild mushrooms involve certain ethics and things to consider. First and foremost, find out the rules and regulations of your harvesting site. Some state and federally owned parks may require permits. Overharvesting could mean protecting the patch for harvests later in the season or even years into the future. Considering the age of the mushroom is also important. Mature mushrooms release spores that are crucial to the overall growth of the species so leaving a few behind is a necessary step in wild harvesting. Although this seems like a given, be mindful of your trail.

Try not to bring or wear heavy gear that could disturb a patch of promising mushrooms. While being mindful of your steps, try to look out of your surroundings– pay attention to any signs especially if venturing onto protected areas or private property. Before you hit the hills though, becoming educated of basic foraging techniques or working with a local mushroom community or guide is the most effective way to ensure your foraging success.

6 Ways To Partake In An Ethical Spring Harvest

Foraging in the Woods: What to Look for this Fall