Cats are magical creatures. Since ancient times, their supernatural grace has been observed, revered (as well as demonized), and incorporated into art and mythology. Sleek, cunning, and a little detached, cats seem to have one foot in the spirit realm, their piercing eyes always gazing just beyond the veil. It’s no wonder, then, that cats are the number one animal associated with witches. There is something energetically similar about cats and witchy women, both so keenly aware of their surroundings while presiding in their own enigmatic worlds. And, like witches, cats know exactly what they want, and impossible to control. A cat can be the most loving companion, but don’t ever expect her to forsake her autonomy.

Both cats and witches embody the archetype of the feminine. They occupy the moonlit spaces, where intuition leads the way, and nimble, stealthy movements prevail over masculine aggression. Cats have been aligned with magic and the feminine since ancient times – sometimes for good, sometimes for worse.

Of all the ancient civilizations that revered cats, Egypt is perhaps the most well known for it. Cats were held in such esteem that their souls were thought to encounter the same afterlife as human souls. Many tomb paintings feature cats alongside human families. While often portrayed as hunting companions, cats are also depicted as companions and housecats, residing comfortably besides their owners in domestic settings. There was no distinction between a wild or domestic cat – all cats were welcome in the home.

Cats were connected with feminine deities. Two widely venerated Egyptian goddesses, Bastet and Sekhmet, are feline deities. Bastet is quite literally the goddess of cats, depicted as a cat or a woman with the head of a cat, and presides over the home, fertility, and protection. To harm a cat was considered a crime against Bastet herself. Cats were considered incarnations of the goddess, and were kept by priests at her temple. And Sekhmet, depicted with the head of a lion, is the the fiercest hunter known to the Egyptians and protector of Pharoahs, leading them into warfare.

Both daughters of the Sun god Ra, Bastet and Sekhmet are associated with the Eye of Ra, also known as the All-Seeing Eye. It is regarded as a symbol of protection, but also associated with the destructive heat of the sun. Cats were viewed with a similarly dual nature: domestic companions that protected the home, and lethal predators.

In other mythologies, feline creatures are entwined with the narratives of magical women. Cats were associated with women of formidable stature, but also with danger and deception. In Greek mythology, Diana, goddess of the hunt and moon and teacher of magick and witchcraft, shapeshifts into Lucifer’s beloved pet cat to gain entrance into his chamber and seduce him. In Norse mythology, Freya, goddess of fertility, war, and death, would lead Valkyries into battle to collect fallen soldiers, riding on a chariot led by two formidable blue cats: Bygul and Trjegul. And according to Hebrew folklore, Lilith — notorious for being banished from the Garden of Eden for refusing to be subservient to Adam — shapeshifts into a black vampire cat named El Broosha, preying on newborn babies. Cats so much elicited a different reaction from medieval society. According to scholar of medieval and classical history Dr. Irina Metzler, it is their unapologetically autonomous and refusal to be tamed that made them symbol of heresy. In her article “Heretical Cats: Animal Symbolism in Religious Discourse,” she writes:

Medieval people may have wanted to restrict cats to the function of animated mousetraps, for the very reason that the cat “stands at the threshold between the familiar and the wild.” “Cats were intruders into human society. They could not be owned. They entered the house by stealth, like mice, and were suffered because they kept the insufferable mice in check.” This causes a kind of conceptual tension. While the cat possesses the characteristics of a good hunter it is useful, “but as long as it does it remains incompletely domesticated.” Heretics, too, in a transferred sense, are not completely domesticated, since by challenging orthodox thought and roaming freely hither and thither in their interpretation of religious beliefs they resemble the bestiary definition of wildness. As symbolic animals, then, cats may be the heretical animal par excellence.

Like Lilith, who refused to be domesticated and forced into a life of subservience, cats were stigmatized for their unapologetic independence. They were seen as creatures aligned with the devil and all things evil. In 1233, Pope Gregory IX issued a public decree that officially associated cats with witchcraft, and more specifically, Satan. The decree, Vox in Rama, was a response to rumored satanic cults in Germany, and depicted black cats as part of their devil-worshipping rituals. Some say that this led to the mass extermination of cats in Europe, a correlation not necessarily agreed upon by historians.

Still, the stigma against cats – especially black cats – was real, and it accompanied the witch hunts of early modern Europe. From the 15th to 18th century, countless women accused of witchcraft were killed. One could be accused of witchcraft just for owning a cat. Witches were believed to take shapeshift into cats in order to kill babies and children, or to ride cats through the night to their Sabbat gatherings. Cats were killed along with witches – they were burned and thrown from towers. Black cats were especially feared. Even today, black cats are less likely to be adopted, and they run a higher risk of being tortured or killed due to backwards thinking.

Despite the lingering traces of black cat prejudice, cats have found their way back in the good graces of social opinion. Perhaps its no coincidence that the popularity of all things cat on the internet runs parallel to the rise of the witch, and the reclaiming of the divine feminine. Let us witches honor our feline counterparts, who have historically been revered and demonized for our spiritual powers and iron-clad independence.

In addition to loving felines, the Witch represents an unbreakable connection to our wildness, an exploration of mysticism (and inner magic), a trusting of our intuition, and a declaration of our creative power. We encourage you to learn more about this incredible Archetype.

In Witch: Unleashed, Untamed, Unapologetic, hereditary witch Lisa Lister explains the history behind witchcraft, why identifying as a healer in past centuries led women to be burned at the stake, and why the witch is reawakening in women across the world today.

Witch on the go? Consider our Season of the Witch E-Zine: Volume II. Within these pages, we offer some explorations of the many manifestations and origins of what it means to be a witch. We hope to offer some empowerment, some magick, and some avenues to better understand the self, ancestry, and witchcraft in the many forms that it might take. 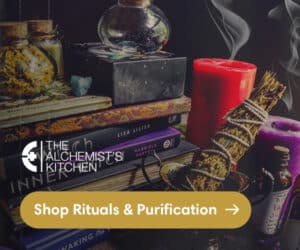