Western culture typically elevates the spirit above the body. It is no wonder that our society has trouble with the concept of “sacred sex” when the spiritual has been so firmly separated from the body and the physical plane. Yet in my own life, some of my most profound and moving spiritual experiences have been incredibly embodied. I’ve explored spirit through touch, orgasms, currents of energy running through my body at significant times. I’ve shifted consciousness through bodily sensation and bodily knowing. In peak experiences, I’ve felt a full-bodied connection to all that is – some would say, to the divine. My most spiritual experiences did not involve transcending the body – they were completely immanent to it.

How could I explain this? These experiences required I find a new conceptual framework, one without a firm divide between the physical and spiritual. I wanted an understanding that would provide a deeper breakdown of the dualism at play in those ideas. What if instead we conceived of there being a spectrum of energy, from less to more dense? What if we didn’t value one density over another? Perhaps in the future, science will expand to comprehend and theorize all the “mystical” subtle energies that exist. The interplay of these different energy fields would then no longer appear as an unbridgeable gap between spirit and matter. Then the idea of making spirit (less visible energy) primary over matter (denser energy), or vice versa, would seem preposterous. As many of the great religious traditions have told us, isn’t it all one thing?

Once the sacred and spiritual are redefined as physical and embodied, “sacred” sex makes much more sense. Modern sexual dilemmas of guilt, shame, and stress around sex begin to disappear. We’re no longer trapped by the Judeo-Christian legacy of denying the body. As Indologist George Feuerstein writes, “spirituality, then…is about embodiment and grounding…the challenge is not to go out of the body but to realize that it is the temple of the sacred.”[i]

If embodiment is sacred, then bodily pleasure must be as well. Claiming pleasure itself as sacred is hugely subversive. As pioneer in feminist spirituality Starhawk writes:

The Sacred and the Profane

The words “spiritual” and “sacred” are often defined in contrast to the “secular” and the “mundane”. But this dichotomy is not ubiquitous in religious thought. Feuerstein argues that “Prior to the rise of dualism, the sacred and the profane were not experienced as radical opposites, nor was sexuality excluded from spiritual life.”[iii]  A few western mystics today, such as Franciscan friar Richard Rohr, reframe this sacred/profane dualism:

…after the beginnings of mystical experience, one finds that what makes something secular or profane is precisely to live on the surface of anything. It’s not that the sacred is over here and the profane is over there. Everything is profane if you live on the surface of it, and everything is sacred if you go into the depths of it. So the division for the mystic is not between secular and sacred things, but between superficial things and things at their depth.[iv]

By this measure, there is no inherent difference between the sacred and profane. Everything has the potential to be perceived and experienced in either way. 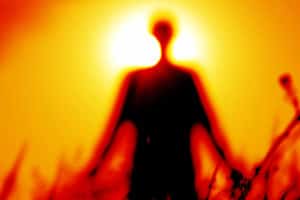 I’ve made some powerful shifts in my own life through this re-framing. I am no longer in pursuit of “spiritual sex” as something that has to look any certain way. Instead, I bring intention and mindfulness to the sex I’m already having. I find I have less shame about my desires as well. A casual hookup can be sacred sex, kink can be sacred, my masturbation practice can be sacred. I celebrate pleasure as a teacher and connector to spirit. As I bring more mindfulness and breath to the pleasure I’m already experiencing, I sink further into the depths of the embodied sacred. Sometimes I may travel far into “altered” and visionary states this way – and I am grateful to my spiritual, physical body for bringing these realms to light. 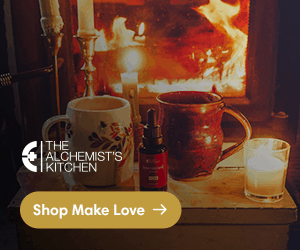 For more, check out The Alchemist’s Kitchen’s Season of Love Collection of herbal offerings here! 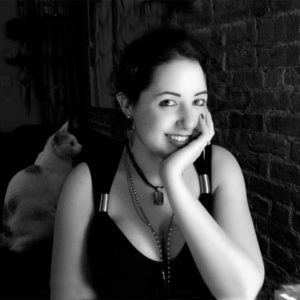 Britta Love is a writer, healer and somatic sex educator currently completing a research-based memoir about healing and awakening through conscious sexual practice and psychedelic ritual, based on her Consciousness Studies thesis completed at Goddard College. She became an advocate for sex worker’s rights as an undergraduate at the London School of Economics in 2007 and has been a writer and activist pushing for the decriminalization of drugs and sex work ever since. Britta has spoken at the Horizons: Perspectives on Psychedelics, Breaking Convention at the University of Greenwich, and the Psymposia Conference at Amherst College as well as presented or facilitated workshops at the New School, the Assemblage, Caveat, Tarot Society, the Gratitude Festival, Catland Books and the Alchemist’s Kitchen in New York City. Her writing has been featured on Medium, Alternet, The Raw Story, Reality Sandwich, and Chacruna and she has been interviewed for WGDR as well as podcasts like Psychedelics Today. Follow her at www.BrittaLoved.com or on Facebook or Instagram at @brittaloved.

WTF is Wellness: Pain is the Great Human Connector