Ginseng–often referred to as the ‘King of Herbs”–is one of the most well-known, over-harvested, and widely adulterated plants available on the western herb market. Indeed, its global demand speaks to this herb’s potent effects as a supreme energy tonic and adaptogenic panacea! There are three closely related species: Korean Ginseng, or Panax ginseng, American Ginseng, or Panax quinquefolius, and Chinese Ginseng, or Panax notoginseng. For this article, we’ll focus on the two more commonly used varieties, Korean (P. ginseng) and American (P. quinquefolius), highlighting their similarities and differences. 1 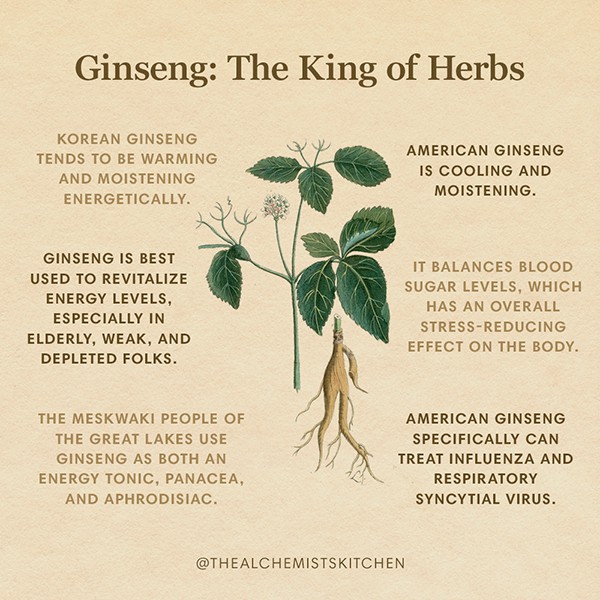 Ginseng plants are slow-growing perennial herbs with a sturdy, forked taproot for which they’re well known. In the wild, this plant usually starts flowering in its fourth year, with the roots taking 4-6 years to mature. However, cultivated they usually require 5–7 years to mature from seed. Once mature, it grows a single whorl of 3-5 palmately compound leaflets, typically toothed or lobed margins. The flower is a single, flat-topped cluster of small, greenish-white blooms. These flowers produce bright crimson, berry-like drupe fruits, each bearing from 1-3 seeds. It generally dies back in the fall, reemerging from the taproot system in the spring. 4

Its genus name Panax is derived from the Greek, pan (all) & akos (cure), meaning cure-all. This is the same etymological root, fittingly, as the term ‘panacea.’ The rough transliteration of the word Ginseng is phonetically from the Chinese ideogram for “crystallization of the essence of the earth in the form of a man.”

Both Korean and American Ginseng have been two of the most economically and historically important plants in their respective cultures and global trade.

For thousands of years, Korean Ginseng has been highly valued in traditional Eastern medicine. Panax ginseng is native to the forested mountains of northeastern China, Korea, and the far eastern regions of Russia. Its therapeutic uses were first recorded in the oldest comprehensive Chinese materia medica, Shen Nong Ben Cao Jing (roughly translated, The Divine Farmer’s Materia Medica), thought to have been written during the Han Dynasty, 220 BCE. It was so sought after that its cultivation started around 11 B.C. in Korea by transplantation of wild plants. 2

In North America, it is native to the deciduous forests and mountains from the midwestern to the northeastern U.S. and eastern Canada, primarily in the Appalachian and Ozark regions. Similar to its Asian twin, American Ginseng was prized by Indigenous North American tribes. Ojibwe healers and spiritual leaders, called Midewiwin, administered the root for digestive troubles and pain relief. Muscogee people drank a tea of the root to treat respiratory infections and fever; they also used a poultice topically on wounds to take down swelling and staunch bleeding. The Meskwaki people of the Great Lakes have used it as both an energy tonic, panacea, and aphrodisiac, considering the plant to be a “universal remedy for children and adults.” 1

In 1716 French Jesuit Father Lafitau first discovered the connection between American and Asian Ginseng after reading a text on Chinese medicinal plants written by another French Jesuit. Father Lafitau recognized the environment where it grew in China as remarkably similar to the area of Canada in which he lived. With the help of the Mohawk people from the Caughnawaga area, he was able to find an identical specimen. American Ginseng quickly became one of the most valuable plants globally as the Asian market welcomed the influx of this medicinal root. In 1784, the first international trade vessel to sail under the U.S. flag went from New York to China with a cargo of over thirty tons of American Ginseng. That same year, George Washington remarked, “In passing through the mountains, I met several persons and pack horses going over the mountain with Ginseng.” 5

After thousands of years of trade and consumption, this plant (both P. ginseng and P. quinquefolius) is endangered and rarely found in nature. Today, Korean Ginseng is cultivated extensively in China, Japan, Korea, and Russia, but the Changbai mountain range is reportedly the only area in Asia where wild Panax ginseng still grows. American Ginseng is largely cultivated these days, with most of the export still going to Asia. After the booming supplement industry of the 1970s, American Ginseng all but disappeared from its native range. Due to its extreme value–even today, dried roots can fetch as much as $600/lb–its commercialization led to unchecked adulteration of much of the products available on the market, causing suspicion in the general population. While the root remains revered in Eastern cultures and traditional medicine, it never quite caught on in the West. 6

Note: It is currently endangered. As such, no species should be harvested from the wild.

Korean Ginseng tends to be warming and moistening energetically, whereas American Ginseng is cooling and moistening. Both are sweet in taste, indicating that they are nourishing. Likewise, both species are useful for building adrenal reserves back up after long term illness, stress, or debility. It is also known to have blood sugar-lowering, immune-modulating, anti-inflammatory, cardiovascular strengthening, and adaptogenic properties, among many other effects. 4

It is a perfect example of a “tonic” herb, or an herb used for nutritive, restorative purposes over a long time. Specifically, it is best used to revitalize energy levels, especially in elderly, weak, and depleted folks. The official German Pharmacopeia Monograph for it reads, “Use as a tonic for invigoration and fortification in times of fatigue.” One study found that it helped cancer patients undergoing chemotherapy with fatigue. Taking it may help stimulate physical, mental, and even sexual activity. Korean Ginseng, in particular, is also a reputed aphrodisiac, often used to treat sexual dysfunctions and enhance sexual behavior. 3

Herbalists classify it as an adaptogen, or an herb that enhances homeostasis by counteracting imbalances in the body brought on by stressors. Studies show that it increases resistance to environmental, disease-related, and emotional stress while improving physical stamina, concentration, and memory. It helps to soothe and nourish overworked nervous systems and adrenals–the glands that produce and secrete necessary hormones like cortisol, our stress-response hormone. Studies show that it balances blood sugar levels, which has an overall stress-reducing effect on the body. 2

It has long been used to support normal immune function and reduce inflammation. Research suggests that ginsenosides, one of the active phytoconstituents, may target pathways in the immune system that boost immune response. American Ginseng specifically can treat and prevent influenza and respiratory syncytial virus (RSV). Findings suggested that an extract could improve the survival of human lung epithelial cells infected with the influenza virus. A study that examined the effect of Ginseng extract on immune system markers in cancer patients undergoing chemotherapy found they had measurably better immune system markers than patients who did not take the extract. 7

Ginseng is generally safe for consumption. Do not use it if you are pregnant or lactating. If you have hypoglycemia, a heart condition, or take pharmaceutical drugs, please consult your doctor before use. As always, consult with a trusted herbalist or physician before taking high doses of herbs regularly.

It is not an herb I recommend experimenting with due to its rarity. However, it may be used in many forms; the following suggestions are the most widely used and accessible to make or obtain in the modern herbal market.

Since it is a root, it’s best made as a decoction or a tea boiled for at least 20 minutes. To make, bring about 32 oz of water to a boil, and add about 2 tbsp of the root, or 4-5 long thin slices. Simmer for 20-40 minutes or until liquid is reduced by half, strain, and drink in 4 oz increments throughout the day.

One of the most portable, convenient, and easy to dose ways to incorporate it into your medicinal routine is in tincture form! Tinctures are usually an alcohol (at least 80 proof vodka, overproof grain alcohol, or other clear booze) extraction of a plant. However, vegetable glycerine or apple cider vinegar may be substituted to keep the preparation alcohol-free.

To prepare a Ginseng tincture, pour the menstruum of choice over the fresh or dried herb (1:2 alcohol to dried root ratio) into a glass container. Label and seal the jar, shake every day for at least 6 weeks—strain, and put into a dropper bottle.

It is also commonly found in powder or supplement form, another wonderful method for quick and easy medicinal dosing. To make powdered Ginseng, blend the dried root in a high-speed blender or powdering machine. The powder may then be measured and encapsulated to the desired dose.

Because it is so endangered, it’s recommended to use this herb sparingly and only source it from reputable, sustainably cultivated sources. Carefully selected, small-batch herbal products containing cultivated American Ginseng can also be found at The Alchemist’s Kitchen. My favorites include these delectable and soothing Herbal Relief CBD Mints by Mr. Moxey, and this stimulating, invigorating Rise Nootropic Supplement Mushroom with CBD by Cured Nutrition.