He Shou Wu (Polygonum multiflorum), also known as Fo-Ti, Ho Shou Wu, and Jiaoteng, is a popular tonic herb in Traditional Chinese Medicine (TCM) with interesting folklore. In western herbalism, we use the root tuber and rhizome of He Shou Wu which is generally cured, or cooked with black soy bean water. In China, cured or raw He Shou Wu are most commonly used, though it’s available in four different methods of processing: raw, cured, wine, and steamed. It is loved cross-culturally for its strengthening, vitality-enhancing properties. 4 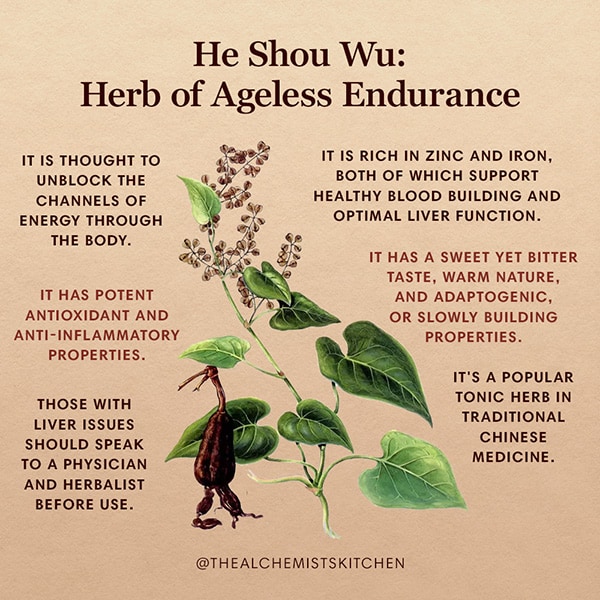 It was originally called jiaoteng, a name which refers to its form: an intertwining vine (jiao = intersecting, teng = creepers). The Chinese nickname for the herb, He Shou Wu, literally means “Mr. He’s Black Hair,” referring to Mr. He, a figure of Chinese legend who restored his youth and gained sexual potency by drinking powdered it in wine. Fo-Ti, the more modern Western-ish name, translates to “a vine to pass through the night.” To add to the many names of He Shou Wu, the processed root is sometimes called zhi heshouwu, to distinguish it from the unprocessed form, which is called sheng shouwu. 2

He Shou Wu is a vigorous twining herbaceous perennial vine in the Polygonaceae family. It is native to East Asia, traditionally found in China, growing along the banks of streams and in valleys. It has red stems, heart-shaped leaves, and either white or pink flowers; below ground, it has a woody tuber and rhizome. It likes warm, moist, sandy, well-drained soil high in organic matter, and full sun to partial shade. The vine grows 3-6 feet long, and blooms from September to October with prolific panicles of small white flowers. 4

Every part of the He Shou Wu plant has been used widely throughout China and East Asia for centuries as a tonic and nutritional supplement. There are many different, proprietary preparations and uses of it, however, for the purposes of this article, we are focusing on the medicinal action and origins of the tuber and rhizome, specifically.

He Shou Wu was first recorded in the ancient Chinese Materia Medica, Ri Huazi Bencao, written during the Tang Dynasty, in 713 A.D. It was then incorporated into the well-known Chinese Pharmacopoeia, Kaibao Bencao, written during the Song Dynasty, in 973 A.D. In about 846 A.D., also during the Tang Dynasty, a book was written called, Xian Shou Li Shang Xu Duan Mi Fang or “The Secret Recipes of the Immortals for Treating Wounds and Fractures,” which described the processing of He Shou Wu to enhance its tonic properties. 2 The processing method involves stewing or steaming it in black soybean (heidou) juice for several hours or up to three days, and then drying the roots; a technique that is still used today. The curing of it has been found to increase the phosphates by close to 30%, while also increasing the sugar/starch content of the tuber. 5 Until the late 1900s, it grew profusely on open hillsides and in villages, especially along the Yangtze River. The local townsfolk gathered the wild roots in autumn, for their own medicinal purposes and to sell at markets. Today, most He Shou Wu is cultivated. 6

The history and folklore of He Shou Wu is quite interesting. The newer name comes from a story called “Heshouwu Lun (Notes on Ho-shou-wu)” by Li Ao, written around 813 A.D. There are many versions with varying details, but the general concept is as follows: Mr. He, from Hebei Province, at age 58, was impotent, malnourished, unmarried, and had never been able to father a child. A vine appeared to him in a dream that he then found growing near his house, but no one knew the use or name of it. A monk advised him to try consuming it, so he gathered the vine, dried and powdered the tuber, and consumed it regularly in wine. Soon after, his hair turned from gray to black, his vision improved, and his body became more youthful. He was able to father several children, and lived to about age 130, still with black hair. Since then, the herb has been known as He Shou Wu, or ‘Mr. He’s hair is black’ (shou = head; wu = black, crow). 2

He Shou Wu has a sweet yet bitter taste, warm nature, and adaptogenic, or slowly building properties. It is thought to unblock the channels of energy through the body, allowing the escape of the pathogenic influences that cause generalized weakness, soreness, pain, and fatigue. It nourishes the blood, liver and kidneys, which supports the health of the skin, hair, muscles, and overall energy levels. 4

Builds the Blood, Tones the Liver

In Traditional Chinese Medicine, He Shou Wu is known to build the blood and nourish the liver. It is rich in Zinc and Iron, both of which support healthy blood building and optimal liver function. 7 Traditional Chinese Medicine recognizes the liver as a source of blood in the body and even through a western, physiological lense, we know that the liver has the important function of cleaning the blood of toxins. He Shou Wu enters at the liver and kidney meridians, providing deep nutrition and working to strengthen and tone the liver, which in turn helps to cleanse, build, and nourish the blood. 3

It is unique in that it has the ability to accumulate and concentrate tremendous amounts of Qi, or energy, in its roots. When consumed, this Qi is assimilated, helping to tonify the organs and move one’s own Qi through the body, resulting in an overall energizing effect. It also provides Jing, or essence, (also understood as deep, primordial energy with which one is born) to the cells by way of the Kidney meridian or organ system. 1 Jing is stored in the kidneys; in western terminology, this is sometimes understood as the adrenals, which sit atop the kidneys and are responsible for secreting essential hormones responsible for balancing other bodily systems. He Shou Wu works to calm the nervous system, provide energizing nutrients, support the kidneys, and enrich the human body’s deep, functional reserves of energy. 6

The antioxidant effects of He Shou Wu are well known, as illustrated by the legend of Mr. He’s hair, which turned from grey back to black. Graying hair is an oxidative process in the body, indicative of higher levels of oxidative stress which accumulate as the body ages. 8 It has potent antioxidant and anti-inflammatory properties, due to active constituents like THSG, and stilbene glycosides, which are similar to resveratrol, working to up-regulate the Klotho gene. Studies found that He Shou Wu also increases the body’s level of SOD (superoxide dismutase), a critical antioxidant that the body produces to fight free radical damage, maintain proper cellular function, and protect DNA. 7

Contraindications of He Shou Wu

Excessive consumption of He Shou Wu can sometimes cause digestive upset due to a cumulative laxative effect. Those with liver issues should speak to a physician and informed herbalist before consuming it regularly, as it has been linked to certain cases of hepatotoxicity. 1

It is available in several medicinal forms. In Traditional Chinese Medicine and western practice, it is often given as a powder or decoction.

The powder is made from the dried, processed root (cooked with black soybean), the powder is then usually added to liquid and consumed. The liquid could be hot water, tea, broth, or even wine. The powder can also be added to capsules and swallowed like a supplement or pill. The dodge is generally a few grams at a time, but as with all herbal medicine, it’s best to consult an informed herbalist for a personalized dose recommendation.

To make a decoction, simmer 9-15 grams of the sliced root (processed root is recommended to avoid laxative effects) in water in a non-metallic pot for about 45 minutes until the liquid is reduced by half. Strain, and enjoy 1-2 cups per day. He Shou Wu decoction can also be applied topically, as a douche for leukorrhea (vaginal discharge), and as a gargle for pyorrhea (inflammation of the gums). 4

It is often grown and processed in Asia, so most likely, you’ll want to order this herb from reputable sources on the internet or, ideally, purchase from small, local makers and businesses, like a neighborhood herb store or health food co-op. One such small business, Sun Potion, includes high quality, organic, powdered He Shou Wu in several of their products, carried at The Alchemist’s Kitchen. My favorite is their pure, potent, wildcrafted He Shou Wu powder.