Rhodiola (Rhodiola rosea), also referred to as “rose root” or “golden root” is an herbal adaptogen which acts as an endurance enhancer, stress reliever, and energy tonic. The Russian army as well as Russian Olympic athletes and astronauts were all given extract in the 60s and 70s to increase performance under extreme levels of stress. Well loved for its wide ranging medicinal effects, it has been in recorded use for thousands of years. Rhodiola grows wild in the arctic, mountainous regions of Europe, Asia, and North America. Due to its popularity, however, it has been over-harvested and should not be wildcrafted. Luckily, this herb can be cultivated and many wonderful, organic sources exist. 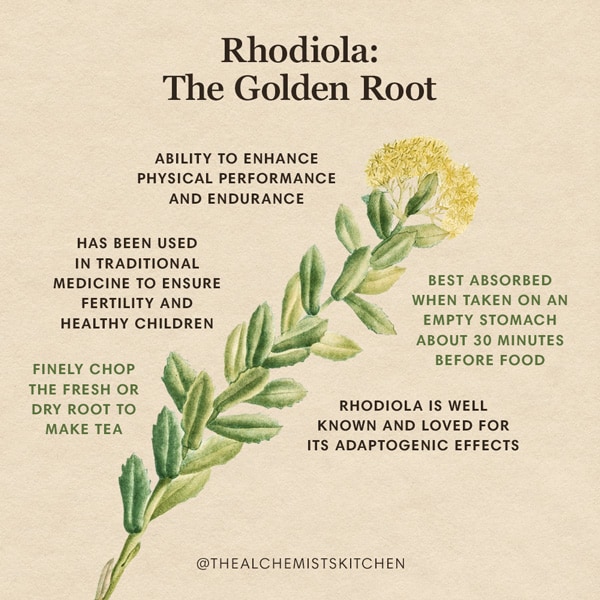 Rhodiola is in the Crassulaceae plant family. It is a perennial succulent, preferring dry, sandy areas at high altitudes, where it grows to heights between 12 – 30 inches and produces yellow, sometimes red-tipped blooms with 4 sepals and 4 petals. Rhodiola blooms in midsummer; it is dioecious, meaning it has separate female and male plants.1 ‘Rhodiola rosea’ was named in full by the late 1700s by Carl Linnaeus, a Swedish botanist and physician, for the fragrant, rose-like scent its thick rhizome emits when cut.4

The first record of Rhodiola in Western history is in a tome entitled ‘De Materia Medica’, by the Greek physician Dioscorides, who catalogued its medicinal virtues in 77 C.E. However, it was used in traditional folk medicine long before this; its growth was widespread enough to be included in a range of traditions, from Scandinavian and Traditional Chinese pharmacopoeias. Generally, Rhodiola was used to increase endurance, longevity, and overall health. It was given as a remedy for altitude sickness, anemia, impotence, gastrointestinal ailments, influenza, infections, hernia, hysteria, headache, depression, and nervous system disorders. Vikings reportedly carried the roots of Rhodiola on expeditions to keep up strength and vitality. In Siberia, it remains a custom to gift bouquets of Rhodiola root to newlyweds to promote fertility and good health.4,5

Native to mountainous and arctic terrains, Rhodiola has managed to thrive in the extreme conditions of high, cold altitude by producing a spectrum of powerfully protective compounds; these same evolutionary compounds lend a range of beneficial effects on humans and mammals. The thick roots of the rhizome, necessary to ground this plant to its habitat, contain the concentration of these grounding and strengthening medicinal compounds.6

Rhodiola has been used by many cultures for many different ailments throughout millennia. For hundreds of years, only those who lived among it knew where to harvest it, and the methods of extraction. Siberian folk brought the herb to the Caucasian Mountains where they traded it for Georgian wines, produce, and other goods. Once the effects of Rhodiola became more widely known, Chinese emperors sent expeditions to Siberia to source the coveted golden root for medicinal preparations. It was included in the first Swedish Pharmacopoeia in 1755.3 In the late 1700s, German physicians were using Rhodiola as a stimulant and anti-inflammatory. Soon after, it became widely used throughout much of Northern Europe, Russia, and Asia.1

Energetically, Rhodiola is astringent/drying, cooling, and stimulating. It has countless reported benefits, and has been used to treat everything from influenza to fatigue to hernia.5

One of Rhodiola’s primary benefits is its ability to enhance physical performance and endurance. Traditional knowledge and uses confirm this, as well as anecdotal evidence and modern scientific investigations. Several studies have demonstrated that it measurably increased physical work capacity and shortened recovery time between bouts of high-intensity exercise on both civilians and professional, Olympic-level athletes. Possible reasons for these benefits may have to do with the stimulating effect Rhodiola has on the Central Nervous System, and the oxygenating effect it has on the blood. Two review articles of 15 different studies, published in 2011 and 2012, found evidence that Rhodiola use enhances both physical and mental performance.2

Rhodiola is well known and loved for its adaptogenic effects. Adaptogens are a category of herbs that help the body adapt to stress in a non-specific way, exerting a normalizing effect on bodily processes.6 It has long been used to protect and support living organisms in high stress situations of all varieties, from the Russian army’s stealth missions to environmental stressors imposed on the embryos of freshwater snails in a laboratory. This herb’s ability to increase nonspecific stress resistance of animals may be related to its capacity to increase serotonin in the hypothalamus and midbrain as well as reduce the activation of several components of the stress response system.2 For example, it increased serum beta-endorphins that protected rats against subsequent stress-induced excess endorphin elevation. In this way, Rhodiola has also been shown to have positive effects on anxiety and depression.1

Rhodiola has been used in traditional medicine to ensure fertility and healthy children; as well, scientific research proves that this herb has noteworthy beneficial effects on the endocrine and reproductive systems, likely acting on the Hypothalamus-Pituitary-Adrenal axis.3 Studies showed that it enhanced both thyroid and thymus gland function, without causing hyperthyroidism. In addition, promising preclinical trials on fertility and hormone function in rats led to a study of Rhodiola extract in women suffering from amenorrhea, or loss of menstrual cycle, and infertility. Normal menses were restored in over half of these women, and over a quarter became pregnant during the study. Dr. Brown, one of the authors of this study, has successfully treated many patients who conceived with Rhodiola extract, after failing to conceive with standard fertility drugs.4 A different study found that 26 out of 35 men with erectile dysfunction responded to this herb with “substantially improved sexual function and normalization of prostatic fluid.”2

Rhodiola has a very low level of toxicity and few side effects. There are some reports of feelings of overstimulation, or agitation, and thus is recommended to be taken early in the day, as it can interfere with sleep.5 It is contraindicated in excited states, and should not be consumed by individuals with bipolar disorder who tend towards mania when given stimulants.6 Taking Rhodiola should not replace getting adequate sleep, nutrition, etc, as this can ultimately lead to fatigue and burnout. It does not interact with any known medications, however, as with any herbal preparation, consult an informed herbalist and a primary healthcare practitioner before use.

Rhodiola, no matter the form, is best absorbed when taken on an empty stomach about 30 minutes before food.1

Tea is perhaps the most traditional preparation of Rhodiola, used by Siberian folk to treat the winter flu. To make tea, finely chop the fresh or dry root, add to desired amount of water, and decoct (simmer) for at least 20 minutes.6

A tincture, or an alcohol-based extract, is a more modern preparation. To make a tincture, add a measured amount of dried or fresh roots to 80 proof organic grain alcohol (vodka works, too), shake daily for at least 6 weeks, then strain and bottle. Alternatively, a tincture of Rhodiola can be purchased and a small amount taken regularly, under the guidance of an experienced herbalist.

A supplement will essentially contain a small amount of the dried and powdered root. To make a supplement, dry and powder the root, then measure and add to empty capsules. Alternatively, a Rhodiola supplement can be purchased and taken regularly, under the guidance of an experienced herbalist.

Where to Buy Rhodiola

As always, make sure any purchased herb is coming from a reputable source! This means buying cultivated, not wildcrafted (due to overharvesting and endangerment), Rhodiola from companies that employ good growing and manufacturing processes. Support small, local businesses, like a neighborhood herb store or health food co-op.  At The Alchemist’s Kitchen, there are lots of wonderful, well sourced products that contain Rhodiola, like this Energy Tonic by Urban Moonshine, this Happiness Tincture from Anima Mundi, and this Run the World supplement by WTHN.

Horoscopes for the Flower Moon