Ashwagandha (Withania somnifera), a valued herb in the Ayurvedic tradition for over 6,000 years, is one of modern herbalism’s favorite plant medicines. Traditionally and currently, It has been used primarily for its adaptogenic properties, which help our bodies adapt to the negative impacts of various stressors. Unlike stimulating adaptogens such as Rhodiola (Rhodiola rosea) and Eleuthero (Eleutherococcus senticosus), Ashwagandha tends to have an overall calming effect on the mind, spirit, and body. In addition to its positive effects on adrenal fatigue and burnout, it can provide a broad spectrum of benefits, including anti-inflammatory, antispasmodic, antioxidant, aphrodisiac, cardioactive, sedative and immunomodulatory actions.2

Ashwagandha is a woody, fruiting shrub in the Solanaceae or “Nightshade” family that grows to be about two feet high. It is hardy and drought resistant, with elliptical, evergreen leaves and green or yellow flowers that give way to round, orange or red berries in the late fall. In most cases, just the roots are used medicinally. Preferring dry, subtropical regions, Ashwagandha grows everywhere from the Southwestern U.S. to Africa to India to the Mediterranean. It is generally easy to cultivate, and the roots are ready to harvest after just one year of growth.1

Ashwagandha has been used in the Ayurvedic tradition for thousands of years as a strengthening and soothing tonic, often in preparations combined with fats like milk or ghee for optimal absorption. In Africa, it was used among tribal peoples to treat fevers and inflammatory conditions. Topically, the berries and leaves have traditionally been applied to afflictions like tumors, ulcers, and burns. In Yemen, the dried leaves are ground into a paste and used for sunscreen.2

Native to India, Northern Africa, and the Middle East, Ashwagandha has existed on this planet for many thousands of years, most likely for millennia.1 Due to its broad growing range, there are many phytochemical variations in the species. Ashwagandha’s species name of ‘somnifera’ refers to its use as a mild sedative. The colloquial name comes from the Sanskrit words ‘ashva,’ meaning horse, and ‘gandha’, meaning smell, for the root has an unmistakably strong, earthy odor4 The Sanskrit name could also be interpreted to mean that the plant provides one with the strength and stamina of a horse.5

Ashwagandha use has been recorded in human history for over 6,000 years, first noted in Ayurvedic texts for its effectiveness in treating malnourishment and emaciation. Through much of Ayurvedic history, Ashwagandha root has been used as a “rasayana,” or a remedy that eases emotional tension and physical discomfort, creating wellness and stability in the body.4 Today, many herbalists recommend it for stress, depletion, adrenal fatigue, and burnout.

It is considered to be warming, sweet, drying, bitter, and pungent.5 Though  its effects can be felt after a single use, like most adaptogens, it provides maximum benefit when taken in small doses over an extended period of time; most medical studies recommend between one and three months of supplementation. As a tonic herb with many beneficial actions, it may be taken regularly or daily for as long as necessary.

Perhaps Ashwagandha’s greatest claim to fame is its pacification of stressful feelings and sensations, both physical and mental/emotional. Extensive scientific studies have been done to back up what ancient knowledge tells us; it’s thought that Ashwagandha’s stress-relieving properties are due to its ability to lower levels of cortisol, a hormone produced by our adrenal glands in response to environmental and physical stress.2 This prevents adrenal fatigue and burnout, allowing us to feel more balanced and centered. One study showed that daily doses of at least 125 mg for 1–3 months lowered cortisol levels in participants by 11–32%. Chemistry focused research posits that ‘glycowithanolide,’ one of the many active compounds in Ashwagandha, is responsible for the cortisol- and stress-reduction.1

Esteemed herbalist, Dr. Michael Tierra writes, “Ashwagandha should be considered as the premiere herb for all negative conditions associated with aging.”5 There are countless studies that have demonstrated its ability to slow, stop, and even reverse cognitive impairments due to age-related neurodegenerative diseases like Dementia. It is broadly beneficial to the brain and nervous system, improving both memory and cognition. Often administered as a libido enhancer, Ashwagandha can similarly increase muscle mass, overall endurance, and physical performance. It is also antioxidant and anti-inflammatory, often indicated for arthritis and age-related physical decline.2

The principal medicinal properties in Ashwagandha are due to the occurrence of certain alkaloid and lactone constituents called ‘withanolides.’ These constituents act as necessary hormonal precursors which the body is able to convert into human hormones. However, if there is an excess of a particular hormone in one’s body, these same hormone precursors take up residency in the hormone receptive sites, actively blocking further absorption.3 Basically, this means it acts as a hormonal modulator, demonstrating the general and unique benefits of adaptogenic herbs which regulate important physiological processes based on the individual organism’s needs. This means claims that it ‘boosts testosterone’ or some similar statement are simply not true for everyone; Ashwagandha will only support hormonal modification if that’s what our bodies need.1 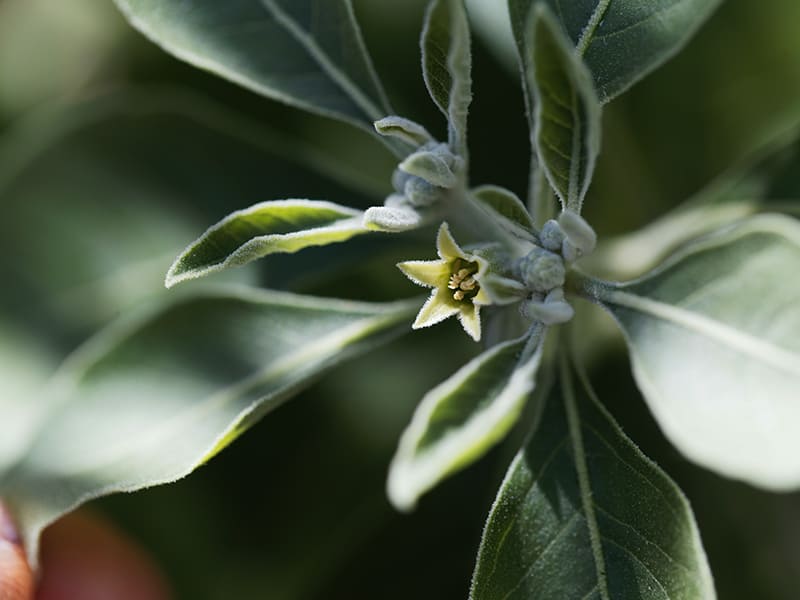 Like most tonic herbs, Ashwagandha is considered safe and non toxic, with no reported potential dangers, even when administered at extremely high doses for long periods of time. Some consider this herb to be contraindicated for high blood pressure and pregnancy; however, as with any herbal preparation, consult an informed herbalist and a primary healthcare practitioner before use.3

What are the side effects?

In clinical studies where participants were given high doses, subjects reported mild to moderate headache, sleepiness, and stomach upset.

Like most herbs, Ashwagandha is not currently FDA approved. The FDA does not approve substances it considers vitamins or supplements.4

Because it is so safe and gentle, it can be taken in many forms and in varying doses, at any time of day, depending on the desired result. Individuals should consult a trusted herbalist for specific protocol recommendations.

Preparing Ashwagandha as a powder added to food and drink is perhaps the most traditional preparation. In Ayurveda, the powder of the dried root was often simmered with milk or combined with honey and ghee to make a soothing, strengthening concoction. It powder can also be encapsulated and taken as a supplement.1

A tincture is a more modern preparation in which the root is extracted in overproof alcohol, shaken daily for at least 6 weeks, then strained and bottled. Tinctures are convenient for transportation and dosing.

Where to Buy Ashwagandha

It is widely available and can be ordered from reputable sources on the internet or, ideally, purchased from small, local businesses, like a neighborhood herb store or health food co-op. Carefully selected, small batch herbal products can be found at The Alchemist’s Kitchen. Some of our favorites: this high quality Ashwagandha powder by Sun Potion is so versatile and lends itself to a traditional preparation; and these harmonizing Capsules tincture by Plant Alchemy, great for restoring balance anytime.