What is Immunity? What is the Immune System?

Literally speaking, immunity is protection from disease, especially infectious disease, but the immune system and immune response are vastly more complex than that. To begin with, the immune system includes lymphatic tissue, the skin, mucosa, normal flora, and bacteria of the GI tract and skin, chemicals such as those found in tears, GI acid, pancreatic enzymes, bone marrow, thymus gland, spleen, lymph nodes, and finally cytokines.

Immunity can consist of a number of factors:

What are some common myths about Immunity?

Getting sick or having symptoms mean you have a bad immune system- False. Exhibiting symptoms of a cold or flu actually means your body recognizes an outside invader and is in the process of fighting back.

A stronger immune system is better- False. Actually, too strong of an immune response is not good for the body. They can lead to dangerous symptoms like severe inflammation of the lungs or the attack of healthy organs.

Taking above-normal amounts of vitamins will boost my immune system- False. In fact, the body cannot sore most vitamins.  Additionally, certain vitamins taken in excess can cause unwanted symptoms such as stock issues, anxiousness, and some can even have an anticoagulant effect that can be quite dangerous.

How does sleep affect the Immune system?

”Hmm, let me sleep on it.” Well, it is not a misconception that sleep does indeed speed up healing or more specifically facilitate proper healing. First, we produce a hormone called melatonin. Muscle growth, bone growth, and overall biological growth are all facilitated by melatonin releasing hormones into the body.

Furthermore, while we sleep our bodies produce beneficial immunomodulating proteins called cytokines that actually signal our immune system to react and help destroy given pathogens.

How does Stress Affect the Immune System?

There are two examples that I find generally applicable. First, stress signals the brain and body to release stress hormones one of which is cortisol. We perceive a stressor or dangerous situation, our body reacts by going into fight or flight mode. When this happens, resources such as oxygen, blood, and nutrients are redirected to the organs and areas that are deemed most important at the time. The result is organs like the brain, muscles, and lungs begin to work faster. On occasion, this is a necessity since it helps us react faster such as jumping out of the way of an oncoming car or running from a dangerous situation. Chronic fight or flight can lead to areas of the body that produce or house WBC and other defenses lacking the vitamins, minerals, amino acids that they need to function properly.

Another contributing factor that stress has on the immune system is more of a psychoimmunological one; the way we react to a stressor can directly influence our ability to lower our immune defenses. A good example would be a coping mechanism. I think we can all agree it has been a stressful year, and everyone has their own way of coping with stress. Some coping methods can be healthy and others not so much, to the degree that it can affect the immune system itself. This includes excessive alcohol consumption, cigarette smoking, and overindulgence in unhealthy sugars and foods.

Overall, “Mind over matter” is a perfect quote since the way we handle and perceive stress psychologically directly affects the way in which we react physiologically. To be clear, danger and trauma are very real but the way we react to them at the moment can have long-standing effects down the road.

Allergies relationship to the Immune System

I think this past year many people with allergies suffered quite a bit from anxiety, and I can definitely understand why. Many allergy symptoms are similar to those of COVID19. Just to shed some light on some environmental allergies include pollen, dust, pet dander, mold, certain cosmetics, birch, pine, and many more.

Mushrooms are fascinating from a biological perspective. They are more related to humans and animals than they are to plants. Traditional Eastern and Western medicine have used fungi for ages. An early example of this is when Greek physician Hippocrates. He used a mushroom by the name Fomes Fomentarius to reduce inflammation and assist in cauterizing wounds.

There are thousands of different fungi that have shown to possess medicinal properties. I will be mentioning the following six: Reishi, Chaga, Turkey Tail, Lions Mane, Cordyceps, and Oyster. Mushrooms contain naturally occurring polysaccharides called beta-glucans. These substances have shown promise in increasing the hosts’ immune defense by enhancing macrophage production as well as natural killer cell function all of which are integral components of a healthy immune response.

The Reishi or Ganoderma Lucidum mushroom has shown great promise in use for circulatory function health. Reishi has the ability to address allergies due to its ganodenic acid content. This effect has been shown to inhibit the histamine response.

Chaga or Inonotus Obliquus, which commonly grows on birch trees, has among the highest ORAC score of any superfood. Its score surpasses foods such as the goji berry which packs quite an impressive antioxidant profile as well. On top of possessing a moderate zinc content, chaga also contains betulin. Betulin has shown potential as both an antiviral and antibacterial.

Named after its fan shape which resembles a turkey’s tail is Turkey Tail or Trametes Versicolor mushroom. Turkey Tail has gained a lot of interest in the scientific field due to two polysaccharides; polysaccharide krestin (psk), and polysaccharide peptide (psp). Together these two polysaccharides have been noted to increase white blood cells, stimulate the creation of T cells as well as macrophages, all of which of important and necessary for a healthy immune response.

Lions Mane or Hericium Erinaceus, partially named due to its resemblance to the large mane of a lion, has gained popularity in the scientific community. On top of its immune-enhancing bet glucan profile, Lions Mane has been shown to boost the production and efficiency of NGF (nerve growth factor). This has led to many studies in its potential therapeutic application for Alzheimer’s and Parkinson’s disease, as well as being used as a cognitive enhancer or nootropic to facilitate overall cognitive health.

Cordyceps has been shown in lab studies to boost ATP. ATP is the fuel for cells. Cordyceps has gained a lot of attention in the fitness community due to its ability to increase energy as good endurance as a result of this boost in ATP.

Oyster Mushrooms or Pleurotus Ostreatus are named so due to their resemblance to the inside of an oyster. This mushroom has a very impressive biological makeup. The Oyster Mushroom contains a type of helpful statin called lovastatin. Additionally, this mushroom is rich in zinc, iron, and b vitamins. Among these b vitamins are  b6 which is necessary for stimulating the production of serotonin. The Oyster Mushroom has exhibited the ability to break down hydrocarbons thereby showing potential to absorb and break down toxic chemicals and pollutants.

Elderberry or sambucas is a great option for a preventative approach to reduce your chance of contracting an infectious bug. The reason for elderberries’ effectiveness is due to their high nutrient-dense profile. To give you an idea of just how high nutrient profile is; one cup of elderberries can boast over 800 mg of vitamin A, 400 mg of potassium, 50 mg of vitamin C, 2 mg of iron, 50 mg of calcium, and 9 mg of folate. Additionally, one cup can contain more than 10g of fiber per cup. That’s amazing especially since the dietary guidelines for Americans are 34 g for men and 28 g for women.

Elderberry is available in many forms such as dried berries, raw, tinctures, powdered. My personal preference is tincture form. It is more convenient to take it as is or add it to my morning tea, coffee, juice, or shake.

Vitamin D is another great option right now. Vitamin D has a plethora of functions within the human body. It regulates calcium and phosphate absorption and metabolism, as well as clearing phosphate from the renal system. The human body needs Vitamin D for man other reasons as well. Our muscles need it to move, the nerves in our body need it to carry messages between the brain and every body part, and the immune system needs vitamin D to fight off invading bacteria and viruses.

Fascinatingly enough, our bodies form Vitamin D as a reaction to exposure to ultraviolet light, more specifically the UVB light. However, as we age our skin slowly loses the ability to efficiently absorb and convert UV light into Vitamin D and supplementing becomes necessary.

Zinc is another important nutrient that the body’s immune system needs zinc to do its job. Older people and children in developing countries who have low levels of zinc might have a higher risk of getting pneumonia and other infections. Zinc also helps the skin stay healthy. Some people who have skin ulcers might benefit from zinc dietary supplements.

The body possesses copious amounts of zinc. It helps the immune system fight off invading bacteria and viruses.

Many foods can help and reinforce your immune system as well.

Our Favorites by Plant Alchemy 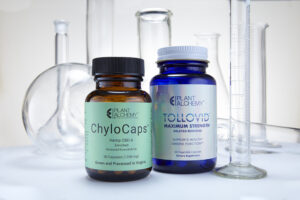 You can learn about more Tollovid HERE.

ChyloCaps ™ contains a patent-pending magnesium-infused full spectrum cannabinoid complex that is rich in CBDa. They offer efficient and consistent dosing with greater potency and better absorption than most products derived from hemp. The bio-availability is faster and superior to most CBD formulations.

Highlights of the product include; A powerful plant-based anti-inflammatory, Can reduce the inflammation caused by viruses, Can help support serotonin production, balance your body, and regulate mood, Can help reduce nausea.

You can learn more about Chylocaps HERE.

Immunity is an aspiration. One should strive to develop immunity to negativity, unhealthy habits, and unhealthy relationships. We should strive to become the most resilient version of ourselves possible. Stay happy, stay healthy, and I am looking forward to meeting with you again.

Mycologist of the Month: Jason Scott

Power up Your Immune System: Our Resilience Guide for Staying Well