Medicinal adaptogenic mushrooms are an ancient tonic medicine experiencing a much deserved revival in modern wellness culture and consciousness communities around the world.

There are mushroom tinctures sold in wellness havens like The Alchemist’s Kitchen, and mushroom coffee blends for sale in Urban Outfitters demonstrating the popularity and the sheer curiosity people have about these organisms.

Have you been feeling the mushroom calling? And what are these organisms?

Including medicinal mushrooms, there are an estimated 1.5 million species of fungi, including yeasts, molds, and macrofungi. All of them share certain characteristics with animals and humans. It’s fascinating to consider that humans have more genetic characteristics in common with fungi than plants. Humans share an evolutionary relationship with fungi as both inhale oxygen and exhale carbon dioxide. Both humans and fungi are susceptible to the same germs, and just like humans, fungi obtain energy by consuming other life forms rather than photosynthesis (like plants do). The complex web of fibrous tissue from which the fruiting body of the mushrooms spring out of is called, “Mycelium,” and it keeps all of the plants and trees interconnected underground. Mycologist pioneer Paul Stamets calls it “the neurological network of nature,” a “sentient membrane” and he believes that it has “the long-term health of the host environment in mind,” (quoted from his book Mycelium Running). All of these fascinating realizations on fungi indicate an intelligence and mystery beyond the assumption of the masses.

Some examples of this are as follows,

How Else Can Fungi be Used?

While we focus on medicinal mushrooms, it is helpful to keep the conversation open and ask how else can fungi be utilized in our modern world today?

We are now beginning to revere their presence in our health regiments, but what about other sustainable practices for the planet and our environment? Perhaps learning how to access the benefits of mushrooms for natural pesticide control and breaking down plastic in landfill  are the next step to their effective use as medicine.

Medicinal adaptogenic mushrooms can be a reliable source of medicine and also nutrition. The term “adaptogenic” is used for this class of beneficial mushrooms because their virtues qualify them for that title. It means the mushrooms are safe for long term daily use, a non-toxic remedy to help the body and mind adapt to stress. The kind of stress like looking for a new apartment in New York City, or managing a recent heartbreak.

Ultimately, these organisms create resilience in the HPA axis (hypalthalmus-pituitary-adrenal axis) or adrenal function which is a process responsible for balancing stress hormones (like the famous cortisol) and are important in our physiological response to stress. Rather than being stuck in a “fight or flight” mode that is all too common in busy 21st century lifestyle, the adaptogenic mushrooms allow us to work towards a calmer and more meditative state on a healthy basis.

However, they also give us energy when we need it. It’s hard to determine exactly how they work in our bodies, as they have extremely non-specific actions that modulate and balance rather than simply “energize” or “relax.” All medicinal adaptogenic mushrooms help support adaptation to environmental stressors.

Some mushrooms are a great source of proteins and even sources of Vitamin D2 and D3. They are mineral rich and have polysaccharides that impart a potent immune system support. According to various studies mushrooms are excellent for:

The mushrooms I work and flow with most are:

Reishi or “spirit mushroom,” which has traditional use as medicine in China, and Asia. The fungi has a complex phytochemistry with high proponents of polysaccharides, triterpines, immunoglobins, polyglycans, beta-glucans, ganoderic acids, and more, all of which regulate cholesterol, provide enriching unique antioxidants, promote a strong immune system, and fine tune the adrenals. Working with a medicinal dose of decocting the mushroom and drinking the tea throughout the day, I find a gentle uplifting quality of the mind. If you have a weakened immune system, are chronically sick, and emotionally feeling down, drinking a strong dose of Reishi is nourishing, calming, and energizing. It is wonderful for an irritated depressed state of the mind and body. In Chinese medicine it has been used for thousands of years to open the “Shen” or the “heart-mind connection.”

Cordyceps is an interesting parasitic fungi as it grows out of living caterpillars and eats them from the inside out like a zombie nightmare. This thought frightens me, because if they can vampire caterpillars, why can’t they do it to humans? THANK GODDESS humans are living symbiotically with them. Because of how rare it is for fungi to thrive in the wild, particularity in Tibet where they are natively used as medicine, humans are now cultivating Cordyceps fruiting body and their mycelium on rice. Some of the benefits of Cordyceps are: a balancer of immune system function, supportive for liver health as well as a deep restorative tonic for kidney and renal function, supportive of superhuman athletic endurance, resilience for the immune system when fighting infectious disease, COPD and lung ailments, supportive for the body when fighting pathogenic and even cancerous cells, and poor libido. I like to take Cordyceps in alcohol extracts, powders, ghee, and spagyrics. I feel the benefits after a couple days, however most should give it at the very least four weeks of daily use to work some cumulative benefits for more lasting results.

Lion’s Mane Mushroom is commonly thought of as a “nootropic” which means it can enhance memory and cognitive function. The benefits listed in the Journal of Agricultural and Food Chemistry are long and complicated: antibiotic, anticarcinogenic, antidiabetic, anti-fatigue, antihypertensive, anti-hyperlipodemic, anti-senescence [anti-aging], cardioprotective, hepatoprotective, nephroprotective, and neuroprotective, and even thought to improve anxiety, and depression. Wild and far reaching! The stories of Lion’s Mane’s benefits date back thousands of years to a certain sect of Buddhist monks who revered this special medicine so much that they wore garments called, “Suzukake” that resembles a lion’s mane shape. Cool right? In my practice as an herbalist, I have seen clients regain sensation from numbness after botched surgeries for which the doctor said there was no possible recovery, and after only three months of daily use. Nervous system tonic, indeed. The stories and feedback of the spiritual properties feels meaningful to report too, as many notice a feeling of interconnectedness and synchronicity. This translates to unlikely related circumstances to occur or “co-incidences” in high frequencies. Many feel a heightened awareness that was left unnoticed before the daily use of Lion’s Mane. Perhaps a good meditation tonic? I think so. Lastly, Lion’s Mane is edible! So go support your local foragers and buy some delicious Lion’s Mane and cook some up regularly for dinner. Think of me, I’ll be smiling and listening to the same song your Spotify is playing at that very moment (oh the magic of synchronicity and fungi).

The benefits of these amazing organisms are so far reaching with little to no downside of taking them. Of course, there is always a chance for an adverse reaction just as one might have with a mustard seed, or bar of soap. We are all so chemically different and require different needs to thrive and balance. Listen to your body and develop your intuition by playing with these remedies. I believe if we seek out these powerful medicines with intention and even gratitude, they may actually WANT to share their healing medicine gifts with us. Explore the mystique of mushrooms and please report back. I’d love to hear from you.

One of my favorite quotes by Paul Stamets is, “The path to the future, is the path of the mycelium.”

To learn more about Mushrooms check out our zine “The Magic Of Mushrooms”. 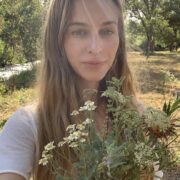 Arielle Hayat of @arielletheherbalist is a clinical herbalist with three years of intensive training from Arbor Vitae School of Traditional Herbalism in New York City. She completed her 1000 hour apprenticeship with 30+ year Wise Woman herbalist Lata Kennedy of Flower Power Herbs and Roots focusing on the Six Steps of Healing of the Wise Woman Tradition. She continues to work at Flower Power and there she is able to empower and guide numerous people in her community to a healthier lifestyle that focuses on wellness from the inside out. Arielle has a private consult practice, (link https://www.thealchemistskitchen.com/pages/herbalists) and teaches weekly workshops at wellness haven, The Alchemist's Kitchen. She also is a founding member of Sacred Lotus Yoni Steam (https://www.thealchemistskitchen.com/collections/sacred-lotus) as a clinical herbalist formulating steam blends for feminine health. Her education in natural plant medicine weaves the methodologies of Chinese medicine, Ayurveda, Native American folk, European herbalism, and The Wise Woman tradition (the oldest tradition of healing on our planet) to nourish the mind, body and soul of her clientele. Arielle's specialty lies in protocols for helping the body adapt to stress, healing mental wounds caused by the affects of tension and anxiety. She also sees clients with issues related to gut/ digestion, viral infections, adrenals, hormones and more. Through their work together, Arielle's clients rediscover their inner peace, and can experience profound emotional and physical transformation. Her website is arielletheherbalist.com.

The Astrology of September 2019: The Beauty of Imperfection

Stalking the Wild Cordyceps at MycoFest