August is here, for me that means MycoFest. MycoFest is our annual Mushroom & Arts Festival the first weekend of August every year here in Central Pennsylvania. MycoFest has held its significance in regards to stalking the wild Cordyceps since the beginning in 2015. Cordyceps season is in full swing for us Central Pennsylvanians during August. This past MycoFest 2019 we led the first Cordyceps foray, foray leaders included Jeff Manganaro, Ryan Paul-Gates, Tugrul DeLuce, and myself. Our first Cordyceps foray was an incredible success. Deep into the Appalachian mountains, we drove, through the country until it became a forest, slowly we cruised down a long gravel road until we reached our destination. We arrived in one of Pennsylvania’s beautiful game lands. Fresh spring water feeds a beautiful creek that slowly carves through the rich humus underneath the mix of Hemlock, and Oaks with an understory of rhododendrons, pawpaws, and spicebush. The ground is soft and covered with moss, you can see the discoloration of where water has pooled during heavy rains, occasionally you notice rocks that have been uncovered by the moving water. This is a perfect Cordyceps habitat. The festival was August 2-4th this year (2019) I had foraged the area about a week prior and found more Cordyceps near the creek. In discussions with Jeff, we both agreed that the Cordyceps move away from creeks as the season progresses. During the foray, we noticed Cordyceps in the moss next to the creek, in wet degraded logs, and coming right out of the soil a few yards up from the creek. We found them on 3 different host species, one confirmed Anisota senatoria- black pupa with spiky cremaster, my educated guess for another host would be Smerinthus cerisyi- Smooth Redish Brown Pupae, this species has been found in the same ecosystems we find Cordyceps, and its part of the Family Sphingidae that has a high number of confirmed Cordyceps militaris hosts. Other potential Pennsylvanian host species Phoberia atomaris, Chytolita morbidalis. We commonly find them on pupa, although this year we found 2 specimens on larval hosts. 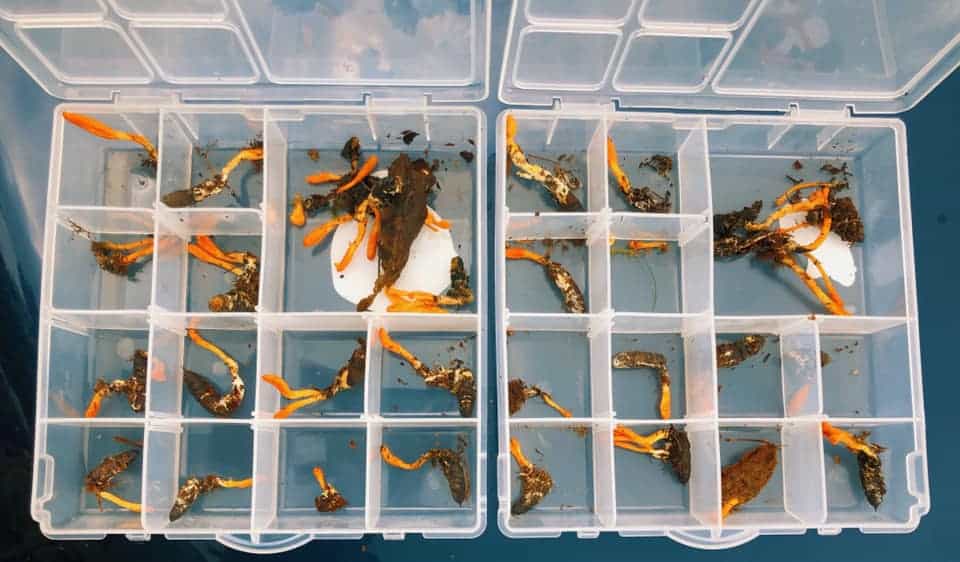 Tools of the Trade

-Key Chain Magnifying Glass to See the Perithecium if you have a hard time identifying them. 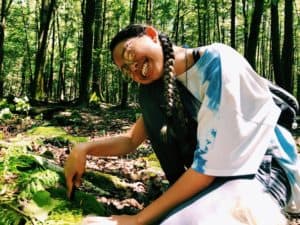 I often tell people I never saw mushrooms until I saw mushrooms, meaning I didn’t see them until I cared to see them. I would say the same about Cordyceps, I foraged mushrooms for a few years before I ever cared to find a Cordyceps. I honestly didn’t even know they grew in my area until Charlie Aller presented one to me in 2015. I found my first Cordyceps in October of 2016 documented on video and posted on Youtube. I found a handful in 2017 and 2018. I really started to see Cordyceps this year. It takes a refined type of person to go out into acres of forest in search for minuscule orange mushrooms, often the size of a toddlers finger. When looking for Cordyceps it’s important to slow down, and walk with intention. Early season June and July walk along creeks, on the East Coast you may constantly be fooled by Cantharellus cinnabarinus, don’t let this deter you keep your eyes in the moss in search for inconsistencies in the green and brown pattern. Depending on the legalities in your city or state, I’ve found low doses of psychoactive substances to be beneficial in seeing these small organisms. I also firmly believe consuming the mushroom helps in understanding it and in turn helps with finding them. During August and October you will find Cordyceps from the creeks to the edge of the forest. Cordyceps militaris doesn’t necessarily depend on rain, I’ve found them during heat waves when little to no other mushrooms are growing. Mid August I find myself walking trails and finding cordyceps in the leaves and in sticks off the side of the trail, as I step off to pick them I wander around the general area where I found them and commonly find at least one or two more in the ground or in the moss.

When it comes to harvesting there are a few ways to go about it. I prefer digging them up with my fingers unless the ground is too hard or they’re buried in roots, then I will use a knife. The insect is very valuable, it is a reservoir of beneficial enzymes and acids, the insect is typically completely mummified and if the exoskeleton is intact the mycelium is very clean for cloning. When the ground is really wet I find it harder to keep the stroma attached to the host when harvesting. I always make sure to harvest with care so I do not break the host. Occasionally you will find a specimen with the host already broken or very soft, if this is the case then there is a high possibility that the host is full of mites that have been eating the mycelium. In conversations with Ryan Paul-Gates, we’ve discussed the possibility of the mites being a means of the culture transporting through the soil. When harvesting every now and then you may notice the skin of the larvae around or on the pupa, this has no real benefit besides its novelty, you may also occasionally find the host pupa wrapped in debris or leaves like a secondary cocoon of sorts, I usually leave them in there until I’m ready to culture them, if left for a day or two you will notice the mycelium proliferating out of the host. You may also come to realize the mycelium is growing through the soil or in the moss around the host, I do my best to leave as much of that intact as possible to help the wild cultures continue their growth, as they may morph into a soil mold Lecanicillium.

Check out Cordyceps Ghee here, and the rest of The Alchemist’s Kitchen mushroom health collection here! 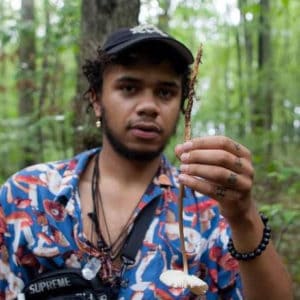 William Padilla-Brown and Cassandra Posey are a dynamic duo focused on creating sustainable solutions for a decade in need of immediate care. They run a farm and micro/molecular biology lab specializing in the cultivation of the Cordyceps mushroom at their home in Central Pennsylvania. William is a certified permaculture designer taking a multidisciplinary approach to designing models of living systems that can be utilized to replace the anti-biotic (against-life) systems that our societies have provided us. he educates locals, and travels teaching workshops on Mushrooms, Spirulina, Insects, Information Technology and Permaculture. William is leading the country in the field of Cordyceps cultivation.