I grew up among women who cooked everything—all the meals for their families, and most every kind of food. From barbecue burgers and potato salad to French toast, and intricate cookies passed down from my German great-grandmother (who measured things in pinches, apparently—my kind of lady!), there were few edibles that could intimidate my culinary inspirations. Except liver. That was the one food that never graced our table despite an apparent taste for it among the menfolk.

From this impression, I have not thought highly of liver—as a food or an organ. It’s often associated with diseases of excess and irresponsibility. Even the way it looks paints it as a kind of sponge for all the vices that we humans seem to gravitate toward, like alcohol and processed meats. Our collective fear around stressed livers has resulted in an equally intense swing in the opposite direction—toward cleansing and detoxification of this enigmatic but powerful organ. 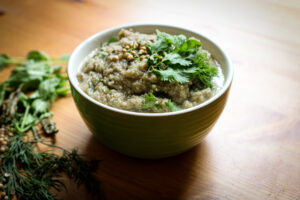 Typically we think of bitter and astringent greens as “liver foods” for this reason. According to Ayurveda and other holistic traditions like TCM and herbalism, these qualities in foods perform a contracting, drying, and scraping process inside the body. Basically, bitter and astringent foods clean out all the gunk we have fed our livers when we have one too many cocktails or pigs in blankets.

What this approach ignores, though, is that the liver doesn’t start out as a sponge for “toxins.” It’s actually a key organ of digestion—of food, but also emotions, per the holistic traditions. The liver filters the blood as it’s absorbing nutrients from what we eat. When we’re eating “clean”—unprocessed, whole foods—that job is easy, and there’s little left behind to clog things up. When we follow more of the SAD (Standard American Diet), the liver has to work a lot harder to filter out the un-nourishing bits of what we consume. The SAD, of course, includes all the stress, violence, loneliness, and other difficult emotional “foods” we consume through the news and media these days.

It’s also common to feel the sluggishness and irritability of an intoxicated liver in late winter and early spring, after a season of heavier, hard to digest foods. Nature helps us out by offering an abundance of light, pungent, and bitter foods in spring—radishes, baby greens, onions and garlic—that help to relieve that build up.

Whether the stress is coming from our choices or from nature, when the liver doesn’t have the capacity to filter all this at the rate it’s coming in, it starts to become astringent itself—the organ contracts and hardens, like a child hiding under their blankets to hide from monsters under the bed. 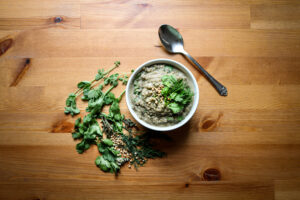 With all this going on, it’s no wonder we all want to rid our poor livers of stressors! But a bitter-heavy cleanse of dandelion and chlorella might not be the best approach for everyone. Remember, a stressed liver is already in a contracted state, so adding more of these kinds of foods won’t necessarily relax it. (The liver is called the “free and easy wanderer” in TCM, so you can keep that in mind as its optimal state.) Also, greens can be very hard on the digestive system overall, and if your liver is already impaired pumping it with tough, fibrous foods may worsen symptoms of digestive discomfort.

Have faith, dear reader—there is another way! You can promote liver health by protecting its functions from stressors, rather than eliminate what has already gotten stuck in the channels. Giving your whole GI tract a break with easily digested foods will allow the liver to relax its tension, and start the process of detoxification it already knows how to do. Indeed, when we get out of the way, our bodies are really quite smart—and know how to do their jobs all on their own!

This soup offers the kind of warm, softening nourishment that ignites the digestive fire (known as agni in Ayurveda) without weighing it down, so the liver can relax and process not only our foods but our emotions more fully. (Add to the recipe some quality time with loved ones, and a few hours or days sans screens, and you’ve got yourself a recipe for the ultimate liver love!) Mildly spiced and good served room temp or even chilled, it has its place in every season, is easy to make, and great for sharing. It’s the kind of meal that is as emotionally satisfying as it is nutritious, so turn to it whenever you’re feeling pent-up and frustrated anywhere in your system. 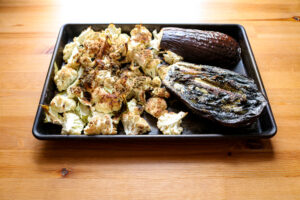 1 medium eggplant, cut in half lengthwise

Handful of fresh dill, cilantro, and oregano, chopped, plus more for garnish

* Note: Hingwastak is a potent Ayurvedic spice blend excellent for supporting sluggish digestion. It is especially useful in preventing gas and bloating from cruciferous vegetables like broccoli and cauliflower, leafy greens like kale, and legumes like chickpeas. It has quite a bit of heat to it, though, so if you experience reflux or other inflammatory digestive issues, then start with just a pinch, leave it out entirely, or substitute it with fennel seeds, which is also a wonderful carminative herb that is more cooling on the gut. 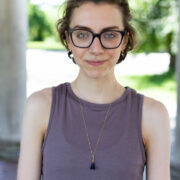 Jennifer Kurdyla is an Ayurvedic Health Counselor, yoga teacher, and writer. Plant-based since 2008, she learned to love food by experimenting with vegan and Ayurvedic cooking in her tiny New York kitchens. She is the co-author of Root & Nourish: An Herbal Cookbook for Women's Wellness (Tiller Press), and lives in Brooklyn, New York. Read more about her wellness services and educational resources at https://jenniferkurdyla.com/ and on Instagram @jenniferkurdyla