To find Oregano (Origanum vulgare), most of us needn’t look further than our kitchen cupboard or the local pizza joint. Oregano’s spicy, pungent flavor is ubiquitous in modern day Italian and Greek cuisine; North Americans consume about 379,000 metric tons of Oregano per year. It often tops the charts as the largest selling culinary herb in the United States.2 Like most cherished culinary herbs, Oregano’s potent antimicrobial properties are at the root of its long love affair in the kitchen as well as its uses as a medicinal plant. 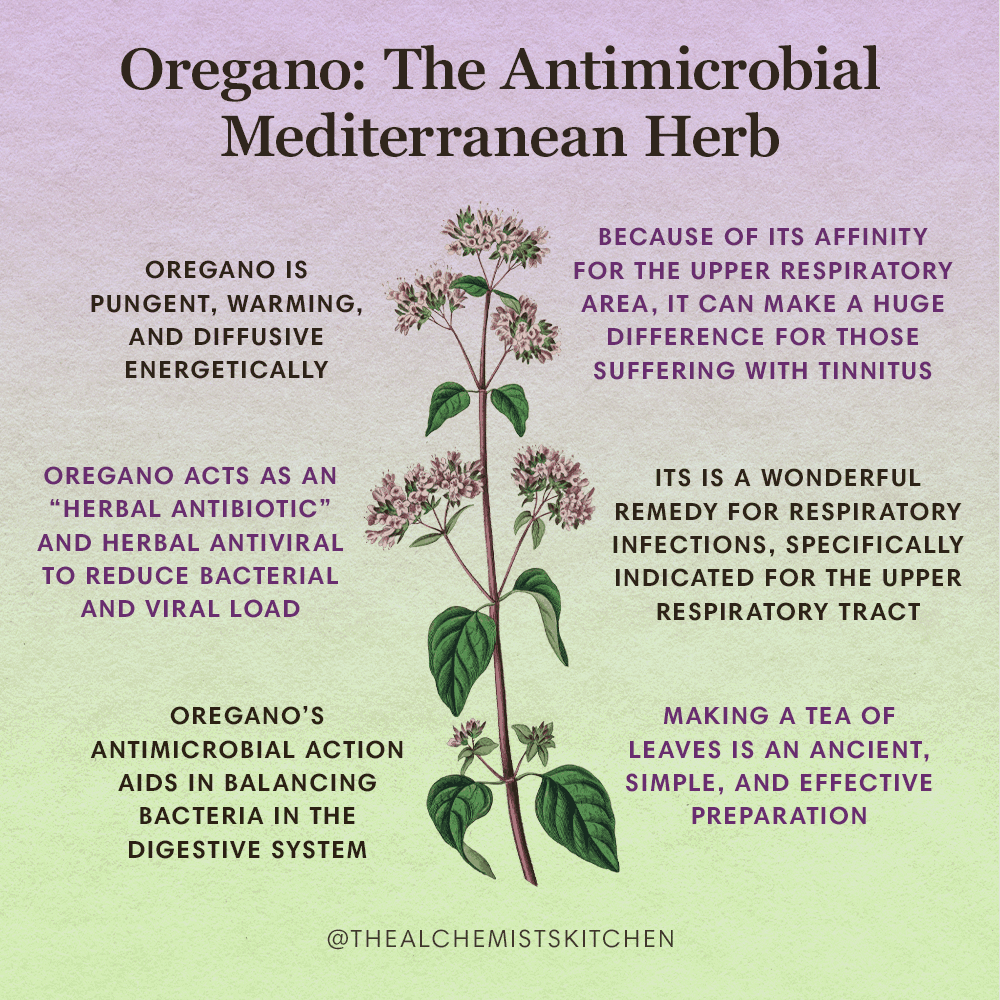 Oregano is part of the Lamiaceae, or Mint family; there are over 200 types of plants considered to be in the “Origanum” genera. The name “Origanum” was coined by the ancient

Greek physician Hippocrates, which originates from the Greek words for mountains (oreos) and brightness/joy/beauty (ganeos). Oregano was often called “joy of the mountains” due to its beauty and abundance.1 Many herbalists posit that because there are so many types of Origanum, it’s best to understand Oregano as a flavor rather than as a specific plant or genus. Oregano’s signature scent and taste is due primarily to the presence of the phytochemical Carvacrol. A herbaceous perennial, Oregano is native to the Mediterranean and Eurasia where it grows in mountainous areas with rocky soil and little water. Species vary in height, from 2 to 40 inches tall. All Oregano species have flowers that occur in spikes with multiple branched stems growing from a central stalk. The stems and leaves are often covered in fine hairs and the leaves are various shapes, most commonly round or heart-shaped. The leaves and flowering parts of the plant contain essential oil glands that secrete volatile oils responsible for the plant’s fragrance.2

Oregano has grown abundantly in vast areas of the globe for millennia; many known and unknown cultures and peoples have recognized its healing, nutritive properties and used all parts of this herb for both medicine and food.

Though Oregano and the Origanum species originated in the Mediterranean and Eurasia, they were cultivated in Egypt for over 3000 years, used by the ancient Greeks since classical times, and have been grown in England since the 13th century. Some of the earliest records of Origanum use date back to 1200 B.C. Syria, when images of the plants were inscribed on tablets by the Hittites. Oregano most likely traveled to North America with European colonists in the 15th and 16th century, and indeed, Oregano quickly naturalized in North America and is featured in certain classic Mexican cuisine.2 Oregano figured in to many pre-Judiac religions, like the polytheist religions of ancient Greece and Rome, where it was considered an herb of protection, purification, and burned to honor the dead. Oregano is mentioned many times in the Old Testament as well, where it was described for similar uses; namely, purification and as an accompaniment to animal sacrifice.1

The fresh and dried herb as well as the essential oil of Oregano have been used in traditional medicine across cultures for centuries. Since the 6th century, Greeks developed a method to employ Oregano as a microbial-inhibiting food preservative. Medicinally, Mediterranean physicians used an infusion of Oregano leaves in water to treat dysentery, colitis, respiratory issues, gastrointestinal distress, rheumatism, arthritis, and fever. Other traditional uses included as an antispasmodic, diuretic, emmenagogue, and aphrodisiac; additionally, a warm infusion was often used to induce or promote menstruation.4 Traditional Chinese Medicine uses Oregano species in the treatment of heat stroke, jaundice, vomiting, acute gastroenteritis, and respiratory disorders. Throughout the globe, Oregano has been widely used in the treatment of skin infections, fungal infections, respiratory infections, earache, and oral infections like abcess, gingivitis, and toothache.2 Early preparations were often in the form of poultice, aqueous infusion, or simply chewing up the leaves.

Oregano is pungent, warming, and diffusive energetically. It is indicated for a “depressed” tissue state, and should be avoided for those with hot, inflamed constitutions.5 Like every herb, Oregano has more uses and applications than we can understand, however, the following are some popular uses in modern, Western herbalism.

Shake some more Oregano onto that pizza! Oregano’s carminative, or digestion inducing properties, are well known and loved. The volatile oils present in Oregano help to dispel gas and belching, soothe putrid digestion, reduce abdominal swelling, and calm dyspepsia, digestive spasm, gastritis, and colic. Oregano’s antimicrobial action aids in balancing bacteria in the digestive system, and supplementation with Oregano has been shown to help with issues like halitosis, SIBO, candida, intestinal worms, and parasites.2

This herb is a wonderful remedy for respiratory infections, specifically indicated for upper respiratory tract infections with profuse mucus. Again, we see its antimicrobial action at work here! Oregano acts as an “herbal antibiotic” (without the unpleasant side effects) and herbal antiviral to reduce bacterial and viral load. Oregano can be used in most cases of colds and flus, and will especially help in cases with fever, shivering and chills. Since Oregano is warming and diffusive, it will warm the body, open up the periphery, and help to sweat the fever out.1

Oregano is one of just a few herbs indicated for tinnitus, or ringing in the ears. Tinnitus can be a symptom of systemic candida overgrowth, which is oftentimes caused by Lyme disease, autoimmune disease, or chronic antibiotic use. Because Oregano has an affinity for the upper respiratory area, and because it is antimicrobial/antifungal, taking Oregano can make a huge difference for those suffering with Tinnitus, a notoriously hard to manage issue. Additionally, this herb is very helpful in the management of all fungal imbalances, including systemic candida, tinea versicolor, thrush, athlete’s foot, yeast infections, and ringworm.5

This herb should never be applied to broken skin or used on or near the eyes, and may cause an allergic reaction in some people. It may cause digestive upset. There’s been no medical research done on this herb’s effects on pregnant or breastfeeding women, and therefore this population should avoid high dose, long term use. As with any herb or supplement, consult an informed herbalist and primary healthcare practitioner before use.3

Oregano’s Methods of Medicinal Use

This herb can be employed in many forms by the skillful herbalist; the following preparation suggestions are the most widely used and accessible to obtain.

Making a tea of leaves is an ancient, simple, and effective preparation. Fresh or dried leaves can be used. Steep 1 tablespoon of fresh or 1 teaspoon of dried Oregano leaves in 12 ounces of just boiled water for 10-15 minutes, making sure the vessel is covered so that the fragrant oils don’t escape. The flavor may be off putting for some, and in this case honey may be added. Hot tea is a wonderful remedy for sore throat, fever, chills, and congestion; a few sips of hot or warm tea after a meal will settle the stomach.

Oil of Oregano is one of the most popular forms of Oregano herbal supplements, and is widely available in health food stores. It is an extract of the volatile oils of the herb; namely carvacrol, thymol, p-cymene, and γ-terpinene.3 This preparation is extremely potent and should be used in low, drop doses only, orally! It’s best to dilute with moisturizer or more carrier oil if using topically. Oil of Oregano is not as concentrated as essential oil, which I do not recommend using at all, and especially not topically or internally.

Let’s not dismiss Oregano’s culinary applications. Remember, food is medicine too. Preparations like Chimichurri, a condiment native to Uruguay and Argentina, is delicious and calls for lots of Oregano and other green herbs. A vinegar infused with Oregano (Pour Apple Cider Vinegar over a few tablespoons of dry or about ¼ cup of fresh leaves. Let the mixture sit, shake daily for 4 weeks, strain, and enjoy) is both medicinal and a culinary delight; use it to marinate meat, add acidity to dishes, or as a base for dressings. Take a spoonful if you begin to feel a cold coming! Add Oregano freely and liberally to any appropriate or experimental dish!

Oregano and its related species can be grown from seed, cuttings, or division. The favored method will depend on that plant’s growth habit and variability. To grow from seed, put 1-2 seeds per cell in a soil filled cell tray in early Spring, using a heat mat or grow lights to encourage germination. Once the seedling has 2 or 3 true leaves, move them to a 6 inch pot for a month and harden off outside for 2 weeks before transplanting into the ground. Cuttings should be made about two nodes up on a woody, established stem then re-potted. Division should be done from a sprawling plant with an established root system.

Where to Source Oregano

This herb is widely available in the world! See if you can find some at local organic farms or for sale in a local nursery. If you can’t find fresh Oregano near you (you can even check the grocery store aisle!), it can be ordered from reputable sources on the internet or, ideally, purchased from small, local businesses, like a neighborhood herb store or health food co-op. Carefully selected, small batch herbal products with this herb can be found at The Alchemist’s Kitchen. My very favorite? This gorgeous, and super potent Organic Oregano Oil by Plant Alchemy.