Was Santa Claus A Shaman?

Our current understanding of Santa Claus dates back to various characters. In European Paganism, the Scandinavian house goblin, for example, offers protection from harmful spirits in exchange for a midwinter feast. We see further inspiration in the Byzantine archbishop, who became St. Nicolas, revered for his generosity and kindness to young children. Equally, the use of fly agaric, a historically hallucinogenic mushroom, may have played a part in the development of Santa Claus’s legend.

At Siberian midwinter festivals, a shaman would enter a yurt through its smoke hole, bringing a bag of dried fly agaric mushrooms with him. Ring any bells? After conducting his ceremonies, the shaman would leave back up the smokehole or what we’d imagine as a present-day chimney. Now, Santa is portrayed dressing in red and white– the same colors as the fly agaric mushroom, carrying with him a sack filled with gifts, entering and leaving homes through the chimney, and flying with reindeer. With this, fly agaric has been a notable symbol for the Midwinter and Christmas festivities in central Europe and found on Christmas cards and decor. 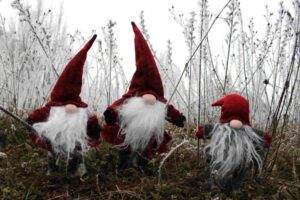 What Is Fly Agaric?

The classic fairy tale toadstool is a red and white fungus often found under birch trees in late summer or early autumn– this is because it has a mutually-benefitting relationship with these trees. The hyphae of the fungus wrap around the root hairs of the tree, receiving sugars that the tree produces by photosynthesis. In this process, the birch gains nutrients, such as nitrogen and phosphorus that the mushroom gathers from the soil. There is a long-dated history of human cultural use of the fly agaric with records from Scandinavia, Eastern Europe, and Siberia.

This poisonous fungus derived its name from being historically used for killing flies by placing the dried powder of its fruiting body in milk. The active ingredients, muscimol, and ibotenic acid– grant its ability to rid unwanted insects and give its desired hallucinogenic effects for humans. To decrease its toxic side effects, fly agaric typically goes through a process that includes drying, making teas, smoking, or creating ointments. Adequate care, preparation, and rituals were vital in working with this highly potent mushroom. 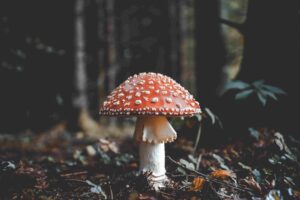 Ceremonial and Traditional use of Fly Agaric

Potentially dating back over 10,000 years, Fly agaric is perhaps the earliest source of entheogens. With the exact origin of the fungus unknown, there are many suggestions for its identification. Fly agaric may be featured in many Vedic references as a substance that aids in communication with the gods. ​​In its ceremonial use of north-eastern Siberia, The Koryak would drink the shaman’s urine after consuming the mushroom to experience its entheogenic effects.

Typically, the shaman would be fasting, making the urine mostly water containing solely the hallucinogenic compounds. Moreover, reindeer in northern Europe were known to the Siberians for consuming the mushroom and they would obtain the meat of “drunken” reindeer to partake in the desired effects.

Flesh of the Gods

Ancient peoples referred to the fly agaric mushroom as the “flesh of the gods,” and the druids are said to use it to come in direct communication with the universe. They would purify themselves by fasting and meditating for three days, drinking only water in preparation for consuming the red and white fungus. These ceremonies went underground and essentially stopped during the rise of Christianity.

Additionally, there are several theories that the intense Viking Berserker warriors used fly agaric before going into battle, catalyzing their well-known uncontrolled rage and fearlessness during their conquests. Highlighting this ancient wisdom, modern research has shown that the two active ingredients in fly agaric affect the brain’s ability to inhibit fear and alter the startle reflex giving strength to these war theories.

How To Work with Fly Agaric

Essences embody a living tradition of magical herbalism and are ideal to legally and safely work with Fly Agaric. Since the early 1900s, essences have been a part of traditional folk magic and homeopathic healing. Developed by Edward Bach, essences are ingested in small amounts to help with emotional pain such as fear, uncertainty, loneliness, oversensitivity, burnout, sadness, and trauma. Essences made from poisonous plants and fungi are safe to ingest and administered for spiritual cleansing, magical rituals, and plant spirit communication.

With the same methods as flower essences, mushroom essences use the fruiting body of the fungi, and the essence is lunar-infused rather than solar-infused to be more in line with mushrooms’ associations with darkness and the underworld. In mushroom essences, the fungi are harvested in an intentional ceremony and often using prayer, then diluted in cold water infusions. As vibrational products, mushroom essences are a form of energy medicine.

Fly agaric mushroom essence is used for understanding microcosms and macrocosms when we are stuck in subjective points of view. It’s used to help those who seek to emotionally recover from sexual abuse, emotional pain, rejection, and other insecurities. Known to be a bridge between worlds– fly agaric essence may also enhance creativity and self-expression, having the ability to connect us with the sacred, the spirit world, nature, and our ancestors or guides.

Are you interested in learning how to alchemize mushroom essences? The Bloom Book is a comprehensive cosmic doctrine to work with a flower’s vibrational signature to make essences. As stated, the same methods used in creating flower essences can be used in mushroom essences by harnessing the fruiting bodies of mushrooms as the vibrational component. This engaging book seamlessly integrates vibrational medicine and the connection between it and the divine feminine. Check out a preview of this book here!

Want to learn more about mushrooms, Yuletide, and herbalism? Check out our Events Page!