If you look at some of the most legendary witches in history, from the enchantresses of ancient mythic lore to real witches that walked the earth, a pattern emerges: the invocation of the primal. They preside over the the darkness, the moon, death, and rebirth. They collude with the earth through plants and herbs, sometimes to heal and sometimes, yes, to bewitch towards a fatal path. Their dominion is the unknown, the enigmatic, the realms beyond reason and logic. And their sexuality – unbridled and unapologetic – is perhaps their most intimidating quality, one that’s long been institutionally vilified.

Despite centuries of repression, the witch has survived and thrived brilliantly in a myriad of forms. Here are ten badass witchy women, both mythical and real, throughout time. Hecate is the Greek goddess of witchcraft and magic. She rules over the darkness, the moon, and the spirit realm. A guardian of thresholds and liminal spaces, it was she who guided Persephone to and from the underworld. In ancient times, she was believed to protect people from roaming evil spirits, and perform necromancy. She also has a deep knowledge of herbology. Poisons and hallucinogens, such as belladonna, hemlock, mandrake, aconite, and opium poppy, are associated with her. These plants are dangerous and mind-altering, and, like Hecate, are dark and mysterious, bringing the user’s consciousness closer to the spirit world. According to Jewish mythology, Lilith was the first woman created by God, before Eve. She was also much maligned as a baby-stealing demon of the night whose dangerously liberated sexuality led men astray. Like Hecate, Lilith is associated with the darkness, the moon, and spirituality. Her refusal to be subservient to Adam got her kicked out of Paradise and forced to have 100 demon babies for each day she didn’t agree to return (she never did). Because of this fierce independence and unapologetic sexuality, Lilith is considered the first feminist goddess.

This legendary witch – fairy queen is a charming and beautiful sorceress that’s featured prominently in the legends of King Arthur. She is connected to the Irish goddess Morrigan, who is associated with war, death, and fertility. Early works featuring Morgan le Fay, such as those by 12th century French poet Chreiten de Troye, portray her as a benign witch and a powerful healer to King Arthur. It’s in the 13th century that her character expands to that of an anti-heroine. She is sent to a coven where she becomes Merlin’s apprentice and lover. She was believed to have extraordinary shapeshifting abilities, transforming into a variety of monstrous and beautiful forms like queen, fairy, crone, and mermaid. Her narrative shift into a devious and manipulative witch is likely fueled by the Christian prejudice towards a non-religious woman healer with great powers. In the Welsh myth collection Mabinogi, this beautiful, silver-haired witch riding a white horse symbolizes inner fortitude and patience. In Slavic countries, Rhiannon is the goddess of death and rebirth. She is accompanied by the Adar Rhiannon, “Birds of Rhiannon.” These three birds possess magical powers, whose song is said to “wake the dead and lull the living to sleep.” Both her and her birds have an illusory power over their position in time and space. She rides her horse Epona slowly, remaining elusively out of reach, while her birds appear far closer to the eye than they really are.

According to legend, Rhiannon went against her parents wishes and turned away a fairy suitor in favor of a mortal man. After her spurned suitor steals her infant son, she is framed by her nurses for killing her own child. As punishment, she is forced to wear a horse collar and cary visitors on he back to and from the castle. Rhiannon serves her punishment with quiet grace until she is redeemed 4 years later. Her story calls to our own inner reservoirs of endurance and strength, and reminds us to trust in the balance of the universe. In 19th century Louisiana, Marie Laveau was known as the Voodoo Queen of New Orleans. Her skills with voodoo, magic, and medicinal herbs were highly revered and sought after by white and black clients alike, all desperate to be granted their specific wishes. After her first husband, a Haitian immigrant named Jacques Paris, passed away under mysterious circumstances, she became a hairdresser with a wealthy white clientele. They say her network of informants planted in those households granted her the illusion of omniscience, cementing the perception of her as a magical, all-knowing witch. She was also said to have a snake, named Zombi after an African god, that she would wrap around her and dance with. People still visit her grave today to pray and leave gifts in the hope that she’ll aid them from the afterlife. This powerful Greek sorceress was said to be a master specialist of magical herbs and potions, and is often depicted with a magic wand or staff. She has a penchant for turning men into animals, most infamously portrayed in Homer’s epic tale The Odyssey, where she invited Odysseus’s companions to a feast, laced their meal and turned them into pigs. Only through the help of Hermes could Odysseus evade her snares, get into her good graces, and turn his shipmates back into human form. She even has a plant named after her — Circaea, also known as the Enchanter’s nightshade — which botanists in the 16th century believe Circe used to charm and lure in her victims. Dion Fortune is one of the most influential figures in the birth of modern witchcraft, and a pioneer of modern magic. She was a British occultist, Christian Qabalist, theosophist, ceremonial magician, and co-founder of the mystery school Fraternity of Inner Light. She discovered occultism while working as a Freudian analyst, and joined the Hermetic Order of the Golden Dawn. After becoming disillusioned with it, she went on to establish her own esoteric order. In her lifetime, Fortune completed seven occult and fantasy-themed novels which initiated readers into the occult by communicating with their subconscious. These novels, particularly “The Sea Priestess” and “Moon Magic” influenced groups like Wicca, a contemporary Pagan new religious movement. Jezebel is the ultimate bad girl of the bible, a legendary witch indeed. Her name is synonymous with cunning, idolatry, and evil. She was born to Ethbaal of Tyre, king of the Phoenicians, who were said to worship many multiple gods and goddesses, particularly to the nature god Baal. When Jezebel became queen of Israel after marrying King Ahab, her polytheistic upbringing and rejection of Yahweh earned her many enemies. She is portrayed as a cruel and evil blaspheming woman that persecuted the followers of Yahweh. Most infamously, she condemned the commoner Naboth to death for not giving land to King Ahab, which he refused on the basis of Jewish law. After King Ahab died, the new king of Israel, Jehu, ordered Jezebel’s servants to throw her from a window. Her body was then trampled by Jehu’s horse and fed to stray dogs. Despite her gruesome demise, she made it a point to go out in style. Anticipating her execution, Jezebel got all dolled up, dressing in her best finery and painting her face.

Baba Yaga, the Crone of the Woods This formidably hideous witch of Slavic folklore is a wild crone that turns the grandmother archetype on its head. She rides around on a mortar wielding a pestle, and lives deep in the forest within a hut fenced by skulls and made mobile by large spindly chicken legs. This witch is unabashedly horrifying – her frenzied, wind-rattled movement is accompanied by bloodcurdling shrieks and the howling of spirits. Despite all this, her morality is ambiguous. She’s been known to aid the valorous hero on his quest, and cook and devour a less fortunate soul. In 1692, the daughter of Reverend Samuel Parris and two other girls began having “fits” – screaming, throwing things, contortions, and uttering strange sounds. They blamed these episodes on three women who were outcasts of society: a slave, a beggar, and a poor elderly woman. Tituba, the slave, confessed to dealings with the Devil. Mass hysteria took over — more than 200 people were accused of witchcraft in colonial Massachusetts over the next year, and 20 were executed (14 were women). Many of the accused were women who threatened traditional Puritanical values in some way, whether they could control it or not. They included women who were outspoken or argumentative, had sex out of wedlock, were deemed too fertile (or too little), or broke any rule in the Bible. They also included the very old or very young, the very rich or very poor, unnatural physical markings on the skin, and midwives. While the colony eventually admitted the trial was a mistake, the incident has become synonymous with paranoid and unjust accusations.

This range of incredible women resonates with historian Laurel Thatcher Urach’s keen observation that “well-behaved women seldom make history.” From the shape-shifting seductress to the pioneer of modern magic, these extraordinary ladies made their indelible mark by stepping out of the status quo. And many were, unfortunately, punished harshly for their refusal to conform to a restrictive and oppressive paradigm. Nonetheless, the witch persists throughout these cultural trials, and the witch is on the rise as women today are claiming the archetype as a symbol of empowerment more passionately than ever.

The Witch represents an unbreakable connection to our wildness, an exploration of mysticism (and inner magic), a trusting of our intuition, and a declaration of our creative power. We encourage you to learn more about this incredible Archetype.

In Witch: Unleashed, Untamed, Unapologetic, hereditary witch Lisa Lister explains the history behind witchcraft, why identifying as a healer in past centuries led women to be burned at the stake, and why the witch is reawakening in women across the world today.

Witch on the go? Consider our Season of the Witch E-Zine: Volume II. Within these pages, we offer some explorations of the many manifestations and origins of what it means to be a witch. We hope to offer some empowerment, some magick, and some avenues to better understand the self, ancestry, and witchcraft in the many forms that it might take. 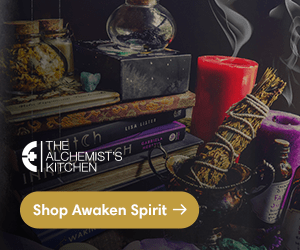 Protection Spell: Season of the Witch