When we think of a seed, we often think in terms of new beginnings without realizing that in order for that seed to grow, something had to die. This is the essence of Dia de Muertos. This tradition isn’t about celebrating the dead per se, is about celebrating the time we get to meet with those who have passed away. Even though we aren’t sure what happens after death, we know their memory still lingers somewhere and Dia de Muertos is the time to bring that memory alive and through the intention of our ofrendas (meaning “offerings”, and altar) we build a bridge for them to join us for one night and celebrate life.

When is Dia de Muertos

We celebrate Dia de Muertos on November 2nd, when we celebrate adults. November 1st is the day we celebrate the children who have passed. The timing of our celebration is no coincidence– it marks the end of the fall or when the crops begin to perish leaving behind their fruit.

It’s also Scorpio’s time, symbolizing death and rebirth. The transition from the 10th to the 11th month coincides with a numerical philosophy that delineates the transcendence of consciousness. We believe this is the time where the veil between the death and the living is lifted. This belief was not only held by the Aztecs, but also the Egyptians and Gaelics who celebrate around this time as well.

Dia de Muertos isn’t a Catholic celebration either, despite the use of crosses and religious prayers. It is in fact an authentic Mesoamerican tradition. All ancient Mesoamerican traditions place credence in the concept of life after death, but their philosophies and rituals vary from region to region.

In Mexico City we usually set the ofrenda in our homes. People from smaller towns do this as well, but they will also traditionally fill the cemeteries with candles and flores de cempazuchitl (Mexican marigold, that means flower of twenty petals) and decorate the tombs of their loved ones.

Depending on the region in Mexico, some places have different kinds of festivals and traditional dances in the cemeteries. One of the most popular is El baile de las Calacas (the dance of the skeletons) where women are face-painted as skeletons and dressed with folkloric dresses, most known as Catrinas; men will be dressed as skeletons as well, or as old men, or diablitos (devils).

What is an Ofrenda

An ofrenda has different elements, starting with the papel picado (colored tissue paper with cut outs in different shapes) it symbolizes the bridge between the living and the death.

We lay salt for protection, and sometimes in the shape of a cross to symbolize the four elements and/or the four directions. We set out a bowl of water to quench our loved ones thirst for their journey. We place intricately colored skulls made of sugar and/or chocolate to represent our dead. We decorate it with many flores de cempazuchitl to provide a distinctive aroma, (they are the traditional flowers of the dead but they are also used in sacred ceremonies in Nepal and India) along with the burning of Copal resin to purify and cleanse the space. We cook our beloved’s favorite dishes and drinks and set them in the ofrenda overnight. We place their portraits and other objects that remind us of them. We often put corn and dried kernels symbolizing life and abundance. And at night we celebrate their presence among us, we dance, we drink, and we remember them.

Death is never easy and it often brings us surrow. Our entire biological system works tirelessly to avoid it and we live our days never thinking about it; when in reality is the only factual event in our lives. We grow up knowing it will happen one day, that is part of living, but yet, is rarely accepted as our fate. Although, due to the certainty of dying, it has inspired humans to open to the possibility that there might be something beyond our physical world. Because even though a flower dies, it seed carries its essence. This is why death so often goes beyond our consciousness, exceeding comprehension. We don’t know when will it happen to us, but our ancestors knew it wasn’t the end; and celebrating Dia de Muertos is a vivid reminder of that. It is in fact, an opportunity to observe, surrender and join the ever-in-motion cycle of life. 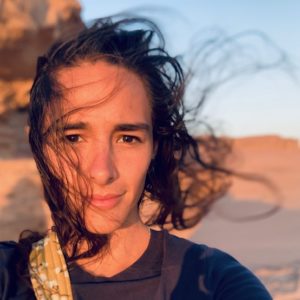 Daniela is a passionate student of what bridges Nature and Human. Her infinite curiosity has led her walk many paths within natural medicine, science, and religion. As a Medical Astrologer she is interested in showing how you are a mirror of the universe. She believes health is the ability to let this connection flow effortlessly and to manifest it into the world in our own unique way. Daniela has been studying astrology for 12 years and it is the foundation of her herbal and bodywork practice. She is currently living in NYC and is an amateur in the Art of Dying. Follow her @philosoma_

Samhain's Past and Present: Season of the Witch