If you’ve never tasted a Mangosteen (Garcinia mangostana) fruit you must not live in the tropics, and you, like most of us, have been missing out. Mangosteen is a Southeast Asian tree that bears fruits so exquisite-tasting and so quick to rot that rumor has it Queen Victoria offered knighthood or 100 pounds of sterling to anyone who could bring her a fresh case of it, thus earning it the name “The Queen of Fruits.”1 Even today, it is nearly impossible to successfully import fresh, the fruit was illegal to bring into the U.S. until 2017, due to concerns of Mediterranean fruit fly infestation. Those who have tasted the flesh of this elusive fruit tend to wax poetic about it ever after, only adding to its intrigue. 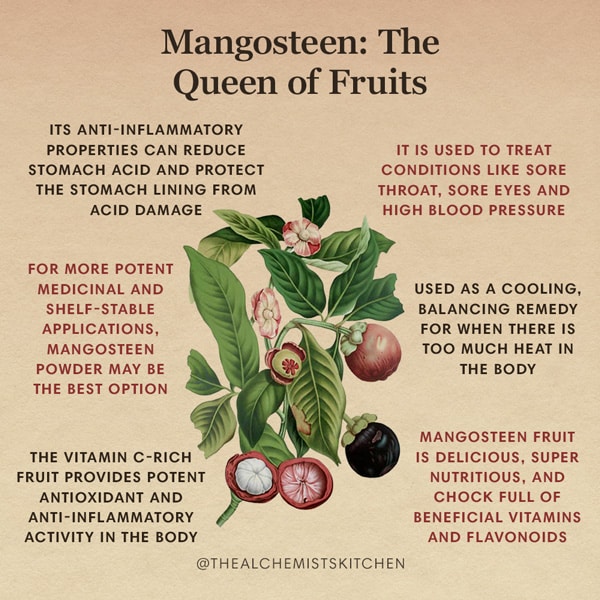 The Mangosteen tree is a slow growing evergreen tree in the tropical Clusiaceae family, which reaches heights that range from about 20 to 40 ft. The tree has thick, dark green glossy leaves in opposite pairs along the stem, and large pink flowers with pointed crowns. The fruit has a deep purple rind when ripe, and the its fruit is sweet and tart, juicy, fibrous, with citrus fruit-like segments of fragrant edible flesh that surrounds large, almond-shaped seeds.4 Mature trees of 35-40 years often yield over 1,000 fruits per year, and continue to produce fruit well past 100 years of age. Mangosteen trees will not tolerate temperatures below 40 degrees F, which restricts their range to Southeast Asia, southern India, and northeastern Australia.1

Mangosteen fruit has been used in indigenous medicine across Southeast Asia for thousands of years; specific applications include as an antibacterial agent, as a vulnerary or wound healer, and for treating diarrhea, dysentery, and similar gastrointestinal ailments.

Mangosteen likely originated in either Malaysia or the Sunda Islands of Indonesia and was first domesticated in Thailand, then India in the 1800s. The fruit is first mentioned in written history in the Yingya Shenglan, a Chinese record from the 15th century, which describes it as a native Southeast Asian plant with white flesh and delicious sweet and sour flavor. Mangosteen was also featured in Linnaeus’ Species Plantarum 1753. Mangosteen culture was introduced to the Western Hemisphere in the 19th century, where stands became established in the West Indies, most successfully in Jamaica. It was later introduced to the Americas and has been grown in Guatemala, Honduras, Panama, and Ecuador.4

Mangosteen has been used in traditional medicine as a cooling, balancing remedy for when there is too much heat in the body. Traditional Chinese Medicine considers it to have the most potent cooling properties of any known plant; similarly, it is used to treat conditions of excess Yang like sore throat, sore eyes and high blood pressure.5 In the Filipino culture of plant medicine, a decoction of Mangosteen leaves and bark is said to quell fevers and help to treat thrush, diarrhea, and urinary infections. In Malaysia, a Mangosteen leaf-based infusion is applied to circumcision wounds and a root decoction is taken to regulate menstruation. Other modern applications use a decoction of the rind to soothe skin disorders, cystitis, and gonorrhea. “Amibiasine” is a standardized bark extract marketed for the treatment of amoebic dysentery.4

The following are the most popular herbal actions for which Mangosteen is currently used, however, this fruit has countless medicinal, nutritional, and practical applications!

Mangosteen contains a wide range of polysaccharide and xanthone compounds in its fruit, leaves, heartwood, and rind with widespread biological benefits, including anti-inflammatory, antioxidant, anti-proliferative properties.3 Similarly, the flavonoids present in the vitamin C-rich fruit provide potent antioxidant and anti-inflammatory activity in the body. One 2015 study found that a “30-day ingestion of a mangosteen-rich drink increased the antioxidant capacity in human blood. The significant decrease in CRP level suggests a reduced risk of inflammation and related chronic diseases.”5

Balances Heat in the Body

Wellness is all about balance; too much or too little of any one thing will begin to pose problems. This truth is evident in herbal healing traditions like Ayurveda and TCM where the energetics of plants are used to balance the energetics of people; Mangosteen as a cooling plant does wonders for people who run “hot” (like Pitta types in the Ayurvedic tradition) and regularly experience irritated, red, inflamed conditions like fevers, infection, skin eruptions, and the like.3 It can also be helpful as a cooling agent when the weather is unbearably hot and humid so as to cause fatigue, rashes, and emotional upset.

This fruit soothes and astringes irritated and inflamed digestive tissues, as we see in its traditional uses as a treatment for diarrhea and dysentery. Simultaneously, Mangosteen’s nourishing properties are also beneficial to those suffering from such illnesses and/or malnutrition. Its anti-inflammatory properties can reduce stomach acid and protect the stomach lining from acid damage; it is also known to feed beneficial bacteria in the digestive biome. Mangosteen fruit is fiber-rich, so eating it can gently remove toxins and build up from the intestines and colon.3

Though generally considered a very safe plant, avoid taking large doses of Mangosteen if you run “cold.” Additionally, it may slow blood clotting. Taking it could increase the risk of bleeding in people with bleeding disorders or during or after surgery; it’s recommended to stop taking Mangosteen 2 weeks before surgery.2 As with any herb or supplement, consult an informed herbalist or trusted healthcare practitioner before use.

If you aren’t a resident of Southeast Asia, don’t despair! Though it’s best fresh, Mangosteen products are available and you can still delight in its taste and beneficial properties.

Since this fruit is known for its amazing flavor—often described as a cross between lychee, peach, strawberry, and pineapple—one of the most enjoyable methods, of course, is to eat the flesh of the fruit! Mangosteen fruit is delicious, super nutritious, and chock full of beneficial vitamins and flavonoids. Certain specialty restaurants and stores carry Mangosteen fruits in Europe and the U.S., however, it’s worlds better to eat them fresh where they grow.

The juice is a great alternative to the fresh fruit; if processed correctly, it should retain a similar flavor to the fruit and contain flavonoids and xanthones. Stores like Whole Foods often carry Mangosteen juice or feature Mangosteen juice as an ingredient in “Superfood” juice blends. Studies have shown that consuming juice does provide antioxidant and anti-inflammatory benefits.5

For more potent medicinal and shelf-stable applications, powder may be the best option. It can be added in measured quantities to hot or cold water, and/or food for a powerful antioxidant boost, cooling properties, and to remedy digestive issues. Powdered Mangosteen is the most common medicinal form.

Where to Buy Mangosteen

Purchasing this fruit can certainly be tough unless it grows where you live! Always do your research when it comes to buying herbs, especially ones considered “Superfoods” as they are trendy and can be overpriced or impure. Look for organic, non irradiated, equal exchange products, taking care to find sources with ethically cultivated and circulated herbs, especially when they’re imported. For example, The Alchemist’s Kitchen carries several fantastic, intentional small-batch products with Mangosteen as a main ingredient. My favorites include this powerfully antioxidant Curam Elixir and this beautiful, Vitamin C-packed Mangosteen Hibiscus Superfood powder, both crafted by Anima Mundi, a wonderful small business specializing in sourcing directly from native people within Central and South America as well as from small farmers from around the world.

Five Questions with The Sabina Project