Mucuna pruriens, often referred to as the ‘Velvet Bean’ is a mood-boosting and nutrient-dense food and medicine. Mucuna pruriens is the Latin name for this bean-producing vine, native to India and some tropical regions of Africa and the Caribbean. Though peoples of these regions have used Mucuna pruriens for thousands of years, this plant has recently garnered more international attention for its medicinal properties and superfood classification.

Across languages, most names for Mucuna pruriens refer to the velvet hairs coating its seed pods. Touching these soft hairs with bare skin often triggers severe itching and irritation due to the phytochemical constituent, mucunain. Mucuna has two Sanskrit names; one is Kapikacchu, meaning “to itch like a monkey” and Atmagupta, meaning “hidden self.” The second name speaks to the prized bean concealed within the allergenic pod. In English, Mucuna’s common name is Cowhage or Cowitch; these nomials also speak to the itch-provoking pods. (3)

Mucuna belongs to the Fabaceae family, which includes around 150 species of legumes. A vigorous annual climbing legume, Mucuna has long, slender branches with alternate leaves and white flowers with a blue-purple corolla. The pods are dark brown, hairy, thick, and leathery, and are an average of 4 inches long; each contains four to six seeds. Mucuna is mostly tolerant to stresses like drought, poor soil, and acidic soil. However, this plant is sensitive to frost and thrives in warm, moist, tropical conditions. Like most legumes, Mucuna fixes nitrogen into the soil via a symbiotic relationship with soil microorganisms. This helps to improve soil fertility and quality. (2) 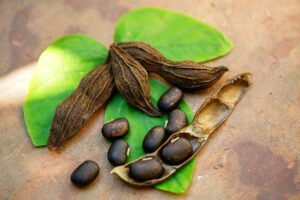 Recorded traditional use of Mucuna in Ayurvedic medicine—the traditional Indian system of wellness—dates back over two thousand years. Though Ayurveda found uses for the whole plan, the seed is the most medicinally and nutritionally viable. Ancient wisdom tells us that Mucuna seed contributes to overall vitality, and benefits the nervous, endocrine, and reproductive systems specifically. Mucuna seed was typically eaten as a food or as a powder added to food or drink. These seeds were a primary source of protein to a South Indian hill tribe, the Kanikkars. This tribe repeatedly boiled the seeds to remove the anti-nutrients before consumption. (2)

Mucuna is a very building herb and food. With a high protein concentration of about 23–35%, it promotes muscle mass and body weight. Like most building and nutritive herbs, Mucuna is sweet and a little bitter. It’s also warming and moistening energetically. Though it helps to nourish all the tissues of the body, it has an affinity for the nervous, reproductive, and digestive systems. (1)

Mucuna pruriens is a nootropic herb with profound balancing and restoring effects on the brain and entire nervous system. The nutrient-dense, oily seeds feed and fortify the nervous system and brain. Mucuna works to mitigate the effects of stress on the body and enhance the nervous system to support fluid muscular movements, proper sensation, coordination, and fine motor skills. Mucuna also contains naturally occurring levodopa or L-dopa, an essential precursor to the neurotransmitter dopamine. Dopamine is an important neurotransmitter that is involved in many functions including behavior, cognition, movement, sleep, mood regulation, and memory. Early research shows that Mucuna has a promising beneficial action on nervous system disorders like MS or Parkinson’s Disease. (2)

In the practice of herbal medicine, we see that fruits and seeds often affect the reproductive system. In Ayurvedic tradition, Mucuna supports all aspects of the reproductive tissues (“shukra dhatu”); it is a premiere reproductive tonic for the gender spectrum. In addition to its stress-relieving and dopamine-promoting qualities, this seed also supports fertility by nourishing sperm and ova and boosting corresponding genital secretions. One double-blind study found that oral administration of Mucuna to infertile men for 3 months resulted in a general improvement in sperm count and motility as well as a significant reduction in psychological stress and serum cortisol levels. Chronically increased cortisol levels can reduce the functional activity of the luteinizing hormone, which hormone levels and therefore, fertility. (4)

Taste plays an important role in the process of ingesting herbal medicine. Taste signals to the body the energetics of the herbs, prompting the body to initiate its own supportive mechanisms. Since Mucuna is such a nourishing, food-like herb, I recommend eating it, in whole bean form or as a powder or tablet. As always, quality sourcing is important! If consuming in whole bean form, make sure the bean has been processed properly as it does have antinutrients, like most nuts and seeds.

Powdered Mucuna is a lovely option, as it offers the experience of tasting the herb, and also provides the most economical option for purchasing it. A typical dose of the powder is about ½ teaspoon, once or twice daily, or as directed by your herbalist or practitioner. Mucuna powder pairs nicely with water, milk, ghee, honey, or some combination of these ingredients. Traditionally, Mucuna was taken with milk and honey to enhance its restorative nature.

Similar to the powder, tablets are a pressed amount of the powder. Tablets may be more convenient to those who don’t want to measure out a dose each day, especially if taking as therapeutic levels for specific imbalances. Mucuna still has the revitalizing, and nourishing, and energizing qualities in tablet form! Try taking with food or drink to enhance complete digestion.

Few side effects have been reported, however, as with all herbs, Mucuna should be taken under the supervision of a knowledgeable herbalist.

Avoid Mucuna in cases of congestion, or in acute infections. Additionally, use with care during pregnancy and while breastfeeding, because it may alter the secretion of prolactin. Avoid use with known allergies to other members of the Fabaceae (Pea) family. Use caution in patients who are diabetic or who are taking antidepressant agents, levodopa, dopamine, dopamine agonists, dopamine antagonists, or dopamine reuptake inhibitors. If you are taking prescription medication of any kind, it is always best to check with your doctor and a trusted herbalist before beginning to take herbs.