Imagine sitting on a flat, square cushion with your legs crossed in a historic Buddhist temple on a cold autumn day. The sun is coming down, and you’re struggling to keep your legs still while they begin to fall asleep—then you close your eyes.

In one gasp, you pick up the faint, sweet aroma of the aged wooden floor swirling up every time a monk passes by in front of you. You can also pick up the scent of the incense burning a few feet away from you. It is smokey and warm with notes of agarwood and frankincense. And it is the same experience every time a slight breeze blows your way.

As soon as you recognize these aromas, you are immediately taken into a relaxing and higher consciousness state. You forget the numbness in your legs, and you feel connected to your surrounding space. You become more present at the moment. The “reality” that you were experiencing a moment ago with your eyes, ears, and even your thoughts, is no longer existent.

Then, a monk rings the high-pitched bell. You are suddenly pulled back into “reality,” while stretching out your numb legs and wondering if you can ever walk again.

This experience is a personal one of my own, from when I sat at Shorinji Zen Temple in Kyoto, Japan, in late 2019. There is no doubt that it was the aroma of the incense that helped put me in a meditative state. Needless to say, I am not the only one in the world who has had such an experience. In fact, the plant-based aroma is essential in spiritual settings for thousands of years now. This is because the sense of smell, or olfaction, is the most powerful method in influencing the mind and emotions.

A Short History Of Smell

There are many ways to inhale an aroma today, such as diffusing essential oils into the air. But burning incense was the prevalent method ancient civilizations used in spiritual and religious settings. The Babylonians, Chinese, Hebrews, Greeks, Egyptians, Mayans, Japanese, and Romans are perfect examples.

The earliest use of incense was by the ancient Chinese, followed by the Hindus. The Hindus actually created the first incense trail to Arabia and Egypt.

In Egypt, the use of incense dates back almost to prehistoric times. The first written record of the word sntr, meaning “incense,” dates back to around 2920-2575 BCE. The ancient Egyptians believed that the fragrance had divine origins. Mainly because they radiated from the eyes of deities, including the eye of the sun god, Re, they also believed that smoke from their traditional incense was divine. For instance, kyphi, a mixture of aromatic resins, myrrh, and juniper berries, was the means of communication between humans and the gods. Such experiences heightened their awareness during religious ceremonies.

The ancient Greeks also used incense in ceremonies to honor their gods and goddesses. And such instances influenced the use of incense in ancient Roman culture.

In the East, where incense culture dates back to as early as 3000 BCE in the Indus Valley, incense still plays a vital role in Hindu rituals. For example, frankincense and cypress are burnt every four hours in temples dedicated to the god Shiva. In Japan, incenses such as the one I enjoyed at Shorinji Zen Temple made a debut in the sixth century CE by Zen Buddhist monks and trade contacts.

Buddhists, to this day, offer incense to the Buddha. They believe that the aroma invokes the Buddha’s presence and peace. Additionally, it purifies the self and the spiritual space. The use of incense in recent history doesn’t end in Asia. As a matter of fact, in the west, Christian churches used an incense carried inside a metal censer with chains called thurible. Thurible signifies the prayer and offering of the Church. It also allows religious observers into the presence of God.

The Role of Smell in Religion and Ceremony

So why is inhaling the aromatic smoke of incense essential in religious ceremonies? Inhaling aromatic molecules stimulates the emotional and behavioral part of the brain called the limbic system. But people in ancient times did not have such an understanding. The discovery of the organization of the olfactory system only happened in 2004. This discovery by Richard Axel and Linda Buck resulted in a Nobel Prize in Physiology or Medicine. The sense of smell is still quite mysterious in many ways, and there needs to be much more research done. But we at least have a better understanding of how aromatic molecules attach and send messages to the brain.

When a person inhales an aroma, the aromatic molecules are first received by the olfactory epithelium. This tissue resides in the upper portions of our nasal cavities, containing six to ten million olfactory receptor cells. Once the aroma passes the epithelium, a nerve impulse initiates into the olfactory bulb. This bulb serves as the first site of odor recognition.

The next stop is the olfactory tract, then finally onto the limbic system, beginning with the amygdala. The limbic system is vital in many emotions, such as pain, anger, fear, sorrow, pleasure, sexual feelings, and affection. It also influences the entire endocrine system of hormones. This system regulates body metabolism, stress, repulsion, arousal, sex, and much more.

The fact that the olfactory system directs chemical messages to the limbic system is unique from other senses. It does not rely on the thalamus as a relay station for sensory input, such as hearing, vision, touch, and taste. Without a relay station, the effect of aromatic molecules’ inhalation is much faster than any other sensory input. And for that reason, as a clinical aromatherapist, I’m a strong advocate for using inhalation methods for psychological pains. You can use them for depression, anxiety, nervousness, exhaustion, worries, and fear.

Aromas can also be strongly tied to emotions attached to memories. This is because the limbic system also includes the hippocampus, the “memory” part of the brain. I, however, do not recommend anyone to think of the brain in separate parts, as it functions as a whole.

The French novelist Marcel Proust wrote in his book Remembrance of Things Past of a madeleine’s aroma bringing back a sudden, involuntary memory:

“..a shudder ran through my whole body, and I stopped, intent upon the extraordinary changes that were taking place. An exquisite pleasure had invaded my senses, but individual, detached, with no suggestion of its origin…this new sensation having had on me the effect which love has of filling me with a precious essence.”

Another fascinating aspect of olfaction is that it is constantly seeking information. And most of it done subconsciously. There is a common saying in Japanese, kuuki wo yomu, or “read the air,” meaning to pay attention to the situation and make proper judgments accordingly. You do so as not to add a “wave” to the situation. It is deeply woven into the culture.

Japanese people dislike verbally expressing their desires and expect others to understand this.

For example, let’s pretend you just aced a challenging exam, and you’re excited to meet up with a group of your friends to share the news. You arrive at the meet-up location, and you immediately notice that your friends are huddled around one individual, who has her head down and her hands covering her face. Instead of bursting in and exclaiming, “Guess what!?” you “read the air” and quietly walk up to your sad friend and ask, “What’s wrong?” and decide not to share your exciting news until another day.

I had always assumed that the phrase was just a metaphor that cleverly expressed the Japanese culture. But after hundreds of hours looking into the studies of olfaction and how people respond to volatile chemicals in the air, I’m convinced that people are actually able to “read the air” through the sense of smell.

Pheromones, for example, are chemicals capable of acting like hormones, floating in the air all around us. All mammals have a fully functional sense of smell from when they’re born, and they rely on smell to recognize family and friends. For example, mule deer have scent glands behind their knees, and fawns recognize their mothers by smelling their knees. My dog, Pogo, can also trace my smell and figure out quickly whether I am home or not by smelling the steps leading up to the apartment door. This is because people shed nearly 40 million flakes of skin every day, rich with flora of bacteria and unique odor (yes, your scent is as unique as your fingerprint, unless you’re an identical twin!).

Smell and Your Brain

The sense of smell exists in the most primitive part of the brain, the limbic region, for a reason: We have been reliant on it for the fight-or-flight response for millions of years. (At the same time, our sense of smell has significantly decreased since we began to walk upright. It is nowhere near as powerful as dogs’, which have 40 million receptors more than what humans have.) We are always subconsciously “reading the air,” looking for signs of danger. Studies have shown that people can smell “fear” and “joy” apart by sniffing people’s sweat-stained t-shirts. This is because people emit different pheromones at different emotional states. If you ever get a “bad vibe” from a person walking behind you, trust your instincts and step away. You may be picking up the pheromones of a dangerous man who is feeling anxious and nervous.

The sense of smell is so fascinating (here’s another fun fact: did you know that plants can also “smell” other plants?) And its history is so rich. The animal with the world’s “first nose” is the hagfish, also called the slime eel, which has been around for 360 million years! And that I cannot possibly summarize in this article.

However, one thing is clear: The sense of smell opens up another dimension of the “reality” you exist in, whether it is enhancing your spatial awareness in a Zen temple, communicating with a spirit through the smell of incense, perhaps understanding the “vibe” of a room, or communicating with other people and animals through pheromones. The sense of smell pulls you into the present moment. What you see, hear, and touch is not the only world that you live in, as our ancestors have understood for thousands of years. I cannot stress the importance of the sense of smell enough. I hope that you pay more mindful attention to your sense of smell and enrich your world. 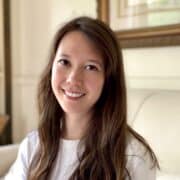 Jasmine Maika Bues was born in San Francisco and raised both in Japan and the United States. Growing up in a Japanese culture that emphasizes the art of aroma, with a mother who was an avid gardener who grew nearly a hundred fragrant English rose plants in her gardens, it was no surprise that Jasmine would be attracted to the study of aroma. Fascinated by the power of aromatic inhalation and how it can affect the psyche, Jasmine earned her certification in clinical aromatherapy to help others relieve psychological pain. She currently resides in New York City and runs an aromatherapy company called Madison + Green, which creates unique, patented inhalers that combine the power of essential oils inspired by medicinal French aromatherapy with aromatic herbs and spices inspired by traditional Chinese medicine.

How to Recover from a Bad Trip