Burdock Root (Arctium lappa) is one of those abundant, versatile, and beautifully effective herbs that should be in every herbalist’s repertoire. Here in the northeastern U.S. and around much of the globe, Burdock grows anywhere its spiny seed pods land—in fact, its “burs” are so adept at grabbing and holding onto animal hair that their natural design inspired the invention of Velcro! Burdock Root is tonifying and nutritive to almost all of the body, especially the liver, skin, kidneys, blood, intestines, and lymphatic system. 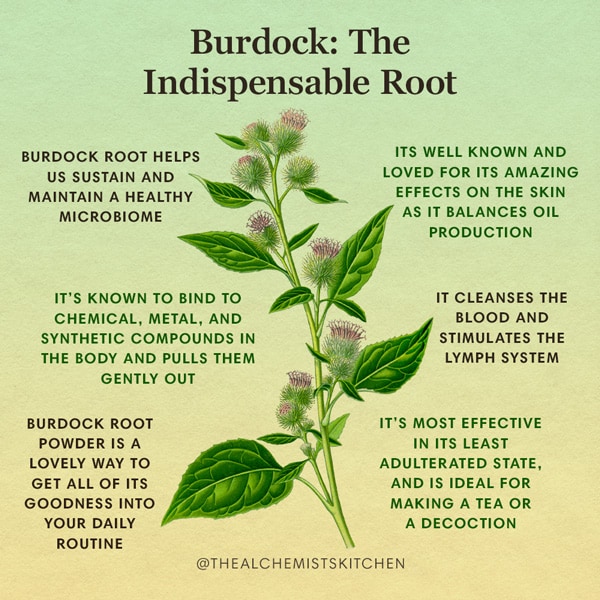 Burdock is a biennial herb, meaning it has a 2 year life cycle during which it grows a large, deep taproot. During the first year, it puts out only basal leaves while it gathers energy into its root; during the second year, however, it shoots up a tall, erect stalk with large, heart-shaped leaves and pink to purple flowers which bloom from its infamous spiked seed pod. The aerial plant can reach heights of nearly 10 feet. Roots tend to be dark brown on the outside with a whitish, inulin-rich interior. Burdock is part of the Asteraceae family; its genus name “Arctium” is from the Greek, arktos, which means bear (a reference to the bristly, bear-like burs of the seed pod and the tendency bears have to dig and eat roots for energy.) The species name, “lappa”, also means bur or thorn, in Latin.5

Since Burdock has grown rampant around the world for millennia, many cultures and peoples have recognized its amazing properties and used all parts of this herb for medicine and food; all parts of the plant are medicinal and/or edible. Burdock Root is the part most commonly used in modern herbalism and contemporary cuisine.

Burdock originated in Eurasia hundreds of thousands of years ago. Due to the very effective design of its seed pods, it quickly spread throughout the world and is now fully naturalized in Australia and the Americas. In Asia, it is an important ancestral food that is still regularly consumed today; in Japan, Burdock Root is called “Gobo” and has a reputation for its potent aphrodisiac qualities. In Russia, Burdock Root is called “Lapuh” and has been eaten for nutritional and medicinal purposes since time immemorial.3

Burdock Root has been in recorded medicinal use since at least the Middle Ages, when it was employed in the treatment of syphilis, leprosy, rabies, burns, kidney stones, gallbladder issues, and headache. Nicholas Culpepper, a 16th century English herbalist, wrote of all the aforementioned uses for Burdock Root as well as uses for the Seed, “The seed being drunk in wine 40 days together doth wonderfully help the sciatica.”1 In the 12th century, German abbess and herbalist Hildegard of Bingen considered Burdock Root an effective remedy for cancerous tumors. Many other herbalists have also recognized its anticancer action; it has been used as such by Russian, Chinese, Indian, and European folk herbalists. In the “Essiac” and “Hoxsey” alternative cancer treatments, Burdock Root is one of the primary ingredients. In the Americas, it was used by the Ojibwe tribe for medicinal cleansing of the body and spirit; the Cherokee tribe also used it for cleansing the blood and moving the waters of the body, considering it medicine of the East.3

Burdock Root is sweet, bitter, and pungent. It is neutral in temperature and slightly drying, though it is indicated in “dry” issues like flaky, scaly skin and eczema. Like every herb, It has more uses and applications than we can understand, however, the following are some popular uses in modern, Western herbalism.

Burdock Root helps us sustain and maintain a healthy microbiome! This is because it’s rich in inulin, a prebiotic oligosaccharide, or soluble fiber. Inulin is an important and effective prebiotic food that directly nourishes our beneficial gut bacteria, strains like Bifidobacteria and Lactobacilli. Ingesting inulin-rich Burdock Root limits the amount of potentially unhealthy bacteria in our gut, increases our ability to digest and absorb nutrients from our food, and has been shown to modulate blood-glucose and insulin levels.5 Additionally, It stimulates bile production, which helps us break down and assimilate fats. As if this wasn’t enough, it also promotes peristalsis and relaxes the colon so that old, residual waste can move out of the body more effectively.

Burdock Root is well known and loved for its amazing effects on the skin. There doesn’t seem to be a skin complaint out there that it won’t help: acne, boils, eczema, psoriasis, super dry flaky skin, dermatitis, you name it! Burdock works on the oils in the body, balancing oil production needs (too much or too little), which often is a major culprit behind skin issues.6 It’s mucilaginous and demulcent, bringing much needed moisture to deprived tissues. This action, coupled with Burdock Root’s potent anti inflammatory properties and its benefits on digestion and detoxification pathways, make it a truly indispensable herb for the skin. An infusion of Burdock Root can be applied topically for conditions like burns, chicken pox, and abscesses.5

Burdock Root is an alterative herb. Herbalist David Winston defines these types of herbs as, “gently increasing the elimination of metabolic wastes through the major eliminatory organs (lungs, lymph, skin, kidney, liver, and bowel), thus improving the body’s abilities to heal and function in a healthy manner”.2 And indeed, it promotes excretion and digestion, it cleanses the blood and stimulates the lymph, modulates and clears the skin, stimulates bile production and liver detoxification. It binds to chemical, metal, and synthetic compounds in the body and pulls them gently out. Burdock Root has also been shown to reverse damage done to the liver by alcohol.4 This humble herb is a more effective detoxifier than any program or product around!

Burdock is considered to be gentle, safe, and well-tolerated by most individuals. However, it might slow blood clotting and therefore might increase the risk of bleeding in people with bleeding disorders. Avoid Burdock if you are allergic to plants in the Asteraceae, or Daisy family.2

Burdock Root’s Methods of Medicinal Use

It can be employed in many forms by the skillful herbalist; the following preparation suggestions are the most widely used and accessible to obtain.

Because Burdock is one of those nutritionally dense “food herbs,” it’s most effective in its least adulterated state. In much of the herbal marketplace, it is sold dried and chopped into small pieces. This form of Burdock is ideal for making a tea or decoction, which will extract much of the beneficial inulin as well as the wide array of other valuable vitamins and minerals. There are many ways to make an infusion of Burdock Root, but this is how I advise my clients to do it: simply pour approximately 8 ounces of just boiled water over 2 teaspoons of cut and dried Burdock Root. Cover, and let steep for 20 mins-6 hours or overnight. The infusion is lovely, however I prefer to make a decoction of Burdock Root: put 16 ounces of water in a pot with 1 teaspoon of dried or 2 teaspoons of fresh Burdock. Bring to a boil then simmer until the liquid is reduced by half, usually 20 or so minutes. For both preparations, strain and enjoy a cup or two daily.

Burdock Root tincture is a wonderful preparation for travel or ease of application, and it does extract well into alcohol. Tinctures are usually an alcohol extraction of a plant, however, vegetable glycerine can be used in place of alcohol. To prepare a Burdock Root tincture, pour menstruum of choice over dried (1:5 herb to liquid ratio) or fresh root (1:2 herb to liquid ratio), keep in a sealed glass container for at least 6 weeks, shaking every day, then pressing and straining. Doses will vary depending on the intention, 1-5 drops for energetic and spiritual properties, 10-30 for physical ailments. The tincture should be cloudy, that’s how you know you’ve captured that gut-loving inulin!

Burdock Root powder is a lovely way to get all of its goodness into your daily routine; like the tincture, it can be portable and like the decoction, it’s close to its food form. Add the powder to drinks, soups, smoothies, curries, desserts—anything you like! Sometimes I advise clients who drink coffee to add just ¼ teaspoon of the powder to their morning brew to help mitigate the harsh acidity on the digestive system.

Where to Source Burdock Root

It is widely available in the world! See if you can find some growing in your yard, garden, or in the weedy spots at local organic farms or other places where pesticides aren’t a concern. Be sure to only harvest roots in the Spring (of its 2nd year) or the Fall (of its 1st year). If you can’t find any growing near you, it can be ordered from reputable sources on the internet or, ideally, purchased from small, local businesses, like a neighborhood herb store or health food co-op. Carefully selected, small batch herbal products with Burdock can be found at The Alchemist’s Kitchen. Some of my favorites include: this fabulous, powerful Gut Health Remedy Tincture by Plant Alchemy, this amazing Organic Herbal Coffee Blend and this nutritive, alcohol-free Solar Power Energy tincture both by Wooden Spoon Herbs.