In June, I had the great fortune to have a phone call with Dennis McKenna to discuss connecting with mushrooms, how psychedelics can heal, symbiosis, and civil disobedience.

Dennis McKenna’s research has focused on the interdisciplinary study of Amazonian ethnopharmacology and plant hallucinogens. He has conducted extensive ethnobotanical fieldwork in the Peruvian, Colombian, and Brazilian Amazon.

His doctoral research (University of British Columbia, 1984) focused on the ethnopharmacology of ayahuasca and oo-koo-he, two tryptamine-based hallucinogens used by indigenous peoples in the Northwest Amazon.

He is a founding board member of the Heffter Research Institute, and was a key organizer and participant in the Hoasca Project—the first biomedical investigation of ayahuasca used by the UDV, a Brazilian religious group. He is the younger brother of Terence McKenna.

From 2000 to 2017, he taught courses on Ethnopharmacology and Plants in Human Affairs as an adjunct Assistant Professor in the Center for Spirituality and Healing at the University of Minnesota. He emigrated to Canada in the spring of 2019 together with his wife Sheila, and now resides in Abbotsford, B.C.

Kate: When did you first feel a connection to mushrooms, as a fungi, as a consciousness, as a thing in the world?

Dennis Mckenna: In 1971 when I first went to South America with my brother, we were looking for something else. We ended up in this little village in the Columbian Amazon not looking for mushrooms, but looking for another indigenous hallucinogen called oo-koo-he.

We were interested in it because it was an orally active form of DMT (as is ayahuasca), although no one really knew that at the time. When we got to La Chorrera, Panama, we found mushrooms everywhere. The pastures had been cleared and they brought in these white humpback zebu cattle.

There was big clusters of mushrooms growing everywhere in this place. So we got into those rather enthusiastically, and I would say that is when my relationship began.

We went there and got way more than we bargained for. You know, if you’ve read the book. Have you read the book True Hallucinations?

Kate: Yes, I have. I remember reading it and telling myself, “I can’t believe this is a real account of a real adventure.”

Dennis Mckenna: Well yep, it’s pretty surreal, but it actually happened. That was my first connection with the mushrooms.

After that we were quite impacted by the experience. So one of the things we did, we brought spores back and we wanted to figure out how to grow these things so we could share.

The motive was that we wanted to confirm that all the crazy things that had happened to us, and all the experiences that we had had really happened, or that other people had similar experiences.

In order to do that, we figured out how to grow the mushrooms. It took a couple of years and then we developed a very simple technique for growing mushrooms out of mason jars on sterilized substrates of rye grain. Then we published a little book in 1975 which was called Psilocybin: Magic Mushroom Grower’s Guide and that was very successful.

Kate: I have a copy!

Dennis Mckenna: You have a copy! It’s still around in several printings! It still sells.

So as a result of publishing that book, it put those tools in the hands of lots of people. Your typical nerdy twelfth grader was able to get very far in their parents’ basement. It looks like kind of a science project, well it is kind of a science project. And if you’re clever enough to do that, you can figure out how to grow mushrooms! At least enough to have abundant supplies for yourself, and your friends. Some people grew them on vast scales, but if you’re going to grow mushrooms to produce for the market, then this is not the technique.

My focus these days has been ayahuasca, but I still respect and take mushrooms. And I still think they’re important. I think that all of these things are important. I don’t really try to rate them, because they all have their place.

And now it’s getting a lot of political attention.

So they effectively decriminalized ayahuasca and all of that. And now those cities are out front on this.

My personal feeling is, you can’t decriminalize something that can’t possibly be criminalized.

I think it’s just bad legal thinking to think that as a species we have the authority to prohibit any other organism.

That’s not the way it works.

Who gave us the right to criminalize another species?

So I think there are human rights issues here as well. I think that people have the right to symbiosis and that’s what this is, interacting with another species for mutual benefit.

That’s symbiosis. Whether it’s for food or something else useful that you get out of that relationship. You know, I don’t think any government or any authority should have the right to say that we cannot engage in symbiosis with any organism that we want to.

Kate: Do you see the Cannabis plant in relation to these others?

Dennis Mckenna: Yeah, it’s all part of the same thing.

The fact that we can form what amounts to as a symbiotic relationship to these other species is an expression of biology.

What are they, the smallpox virus?

We practically eradicated the smallpox virus (maybe you could make a case for that).

But you know, the smallpox virus will always survive because it’s preserved in the bio weapons lab of superpowers all over the world just in case they want to unleash it again someday.

These are plants with a cultural history and a medical history, and there’s absolutely no reason why these substances should be prohibited, and why any law presumes to prohibit them should not be respected.

It’s a fine line, I believe in civil disobedience, I’m not advocating that people should go out and commit federal felonies for the right to consume mushrooms, but the steps that the cities are taking are forward looking.

We need to move that to the state and the federal level. And I’m sorry, I kind of got off track, but your question about cannabis is exactly the same thing. Cannabis has had a relationship with human beings for at least ten to twelve thousand years, we know this.

It yields an enormous variety of useful things, and not just cannabinoids (the psychoactive part), but fibers and nutrition and building materials.

It is easily one of the most useful plants that we have ever encountered or domesticated. It’s useful for remediation of degraded landscapes and all of that. As a medicine, as a drug, it’s inherently quite safe. No one dies from cannabis.

I mean there are instances where people have died from being stoned and doing stupid things, but it’s not the cannabis that kiiled them, it was their own bad judgement.

Dennis Mckenna: So Cannabis is another one like Ayahuasca that’s come out, if you will, onto the global stage, because it can’t be stopped.

They said to the human species, “Hey how about giving us a break here, let’s form an alliance, let’s not prohibit these things.”

Cannabis is another example where you’ve seen this rapid turn around in public attitude. It used to be only four or five years ago there was very little positive about Cannabis in the media. There was a lot of negative press, but now it’s almost the opposite, and this has happened with other psychedelics too.

Five years ago (psychedelics) if they were in the news at all, were viewed as something bad, something prohibited, or something that should be prohibited. And that people that used them were irresponsible. That conversation has completely changed, and largely as a result of good scientific research that shows they are very useful for certain mental disorders or problems that there are not very good medicines for, like intractable depression, PTSD, etc. etc.

Kate: What advice you would give to someone who is looking to form an allegiance with mushrooms or support mushrooms in the world, and connect more deeply with mushrooms?

Dennis Mckenna: Well it’s easy enough, if you live in Denver or Oakland no problem {laughs}.

Let’s get back to this notion of symbiosis.

If someone really wants to get serious about mushrooms they should grow their own. It’s quite easy, the techniques, anybody can do it. It’s not rocket science. It’s really pretty easy to grow mushrooms and it’s much better because you know where it’s coming from and you get satisfaction from looking after the mushrooms, because they do need a lot of care.

So that relationship of looking after the mushrooms, growing them, and getting this sort of visionary reward at the end that you can have is sort of like alchemy.

You’re essentially constructing a philosopher’s stone, and so that’s one way. You can order growing kits from any number of places on the web. They come prepackaged and you just inject the spores into the substrate, and keep it at the right temperature, and wait awhile you know you’re rewarded sooner or later and it’s a good experience because you actually have to nurture this thing. You have to form an alliance. And if you take care of the mushrooms, the mushrooms will take care of you.

Kate: I think I have my new summer project!

Dennis Mckenna: Well you can spend your time in worse ways for sure. 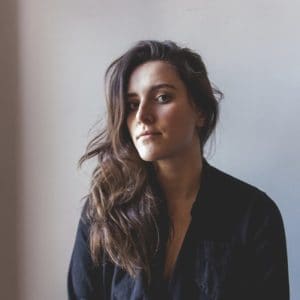 Kate Belew is a Brooklyn based Writer, Poet, Storyteller, and Strategist. Her work spans genres and spaces: poetry, nonprofits, immersive theatre, health & wellness, herbalism, diversity & inclusive, tech, and the psychedelic. She is interested in helping others craft their content, tell their stories, and connect with their innate creative power as well as spinning her own kinds of tales. She has an MFA from Sarah Lawrence College and is currently a student of the plants at Chestnut School of Herbal Medicine. Learn more about Kate at: http://katebelew.squarespace.com/ or @k8belew