For so long, I thought of witch as Halloween and black cats, a smoky room, the flare of a candle, moonlight catching a bare leg on a broom. I admired the women in my life who called themselves witches and practiced everyday witchcraft, but sometimes the concept of enchantments and chalk circles felt far from working three jobs in the city and the mundanity of daily life— wiping kitchen counters, paying taxes, etc.

Now when I think of witches, I can’t stop thinking about language. Every time I write or speak: spells and enchantments. A good poem creates some kind of magic, a space where you encounter something beyond yourself, where anything goes. Words exchanged with someone you love can allow you to encounter this space, too, or a conversation with a teacher who won’t let you run away from a truth staring you in the face.

What I mean is this: witchcraft and witchery is not nearly as distant from my life as I once thought.

Everyday witchcraft might be saying time to wake up to yourself over and over again until you get yourself out of bed. It might be following a recipe and having a stew turn out so good you want to feed it to everyone you hold close. It might be fiercely protecting your energy and time to make more space for the people that deserve it — i.e. the people who have proven that they have your best interest at heart.

Anne Sexton writes in her poem, Her Kind:

I have gone out, a possessed witch,

Witchcraft seems completely connected to bravery, to reaching for something outside of what is seen and trusting your power to create and manifest around it. I think that’s why for so many centuries witches scared the pants off of everyone. They were completely self-possessed. They relied on and trusted themselves. They were in touch with their sexuality, and also their creativity.

I, too, have gone out a “possessed witch,” trying to work my way through heartache and pain through spells of my own making: poems, essays, stories, conversations in the dark with friends over the cheapest glass of wine. These are all spells that lift the fog.

More and more, I think a witch is anyone who wishes to encounter the mysteries of what is both beautiful and grotesque in order to inhabit themselves a little more fully.

Maybe sometimes that process involves black cats and cauldrons. But for me, it means making space for silence so that I might listen in, and understand with clarity, what I’m most afraid of.

Out of that silence, perhaps the spell. 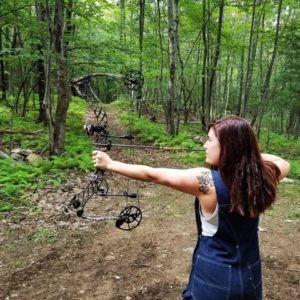 What Does it Mean to be a Witch?