The Alchemist’s Kitchen believes in celebrating the healing power of plants. As a representative of our connection to nature, and as a liaison, we are dedicated to celebrating and honoring the witch and empowering the divine feminine. Beyond the natural healer, The Witch represents a connection to our wildness, an exploration of mysticism (and inner magic), a trusting of our intuition, and a declaration of our creative power.

What is a Witch

The word “witch” carries different meanings for different people. The word originates from the Old English words wicca and wicce, which mean sorcerer and sorceress respectively. But much like magic itself, the deeper origins are unclear.

The etymology has been argued to stem from root words in various languages. Its root word(s) is said to mean: wise, holy, scared.  Although authorities on the subject rarely fully agree, most frequently it’s associated with the word wise.

Thus “witchcraft” can be defined as: The Craft of the Wise. There have been plenty of legendary witches throughout history that embody this wisdom.

‘Witch’ may be rooted in ‘wise,’ but unfortunately throughout the ages, dark and negative connotations were attached to the witch. The Webster’s dictionary defines the term witch as:

The Alchemist’s Kitchen and our coven know that being a witch goes so far beyond this archaic and negative definition. 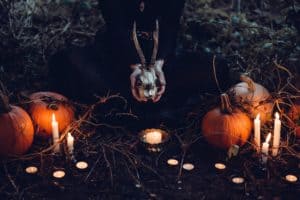 What it Means to be a Witch

During this Season of the Witch, the time of Samhain when the veil between this world and the next thins, we wished to offer you, our community a witchy giveaway to participate in.
As a part of your entry, we asked you, “What does being a witch mean to you?” And you, our coven of witches responded.
Here are our favorites that we can’t help but share….

Being a wise woman. I am a steward of the earth, and respectful of things both seen and unseen.

It is the very air I breathe… it is who I am, what I feel, what I see… it is as part of me as my heart is part of my chest… Blessed Be

Being a witch to me means invoking natural powers to move through different levels of consciousness. It means honoring the natural world and making a positive impact within it.

Being a witch is someone who in touch with the natural world. They are ruled by the earths naturals rhythms and are in touch with their intuition. They use their powers to bring balance and to help the world around them. They are not followers, but instead chart their own way. They are visionaries, healers, and environmentalists. They are connected to nature and hold the upmost respect for Universe. They are divine and all powerful beings.

Being a witch means grounding myself with the inherent rhythms of nature and spiritual energy in all things. It means trusting my own waves and powers; that can be something as simple as breathing in my own quiet. Being a witch means embracing all aspects of my being and continuously learning and relearning all the true power that lies within.

A woman who finds the magic in between the black and white by utilizing Mother Nature as well as the unseen forces to help guide herself and loved ones to live a more joyful abundant life.

A “bruja” in my language is really at term that denotes wisdom passed on for the betterment of communities health and well being.

Being a witch means being in touch with the world around you. Being in tune with all of the elements of nature, and strengthening that connection to heighten your own spiritual energy. By enhancing your spiritual energy you enhance your daily life by taking control of all aspects of it. It is an empowering life being a witch and taking control of your own life while simultaneously having the power to help the life’s of those around you. It is a great honor to have that power and to use it in a positive way!

We are so grateful to all our coven sisters who shared what it means to participate in this craft. By stepping into our power and sisterhood together we can re-shape the definition of the witch.  Enjoy this beautiful season of Samhain.

Check out our Season of the Witch collection here!