During stressful periods, our sleep can be one of the first things that suffers. Maybe you’ve been staying up later than normal scrolling on Instagram, sleeping longer than you normally do, or unable to sleep at all! Stress can affect our sleep in so many different ways. When our routines are disrupted, it can be especially hard to stick to the things that we know help, such as a consistent sleep schedule, making time to wind down and relax, avoiding caffeine, and minimizing the use of electronic devices. Meditation and yoga (like yoga nidra) can be especially helpful.

Luckily, there are many herbs that can help with sleep and stress– all can easily be added to your daily routine! 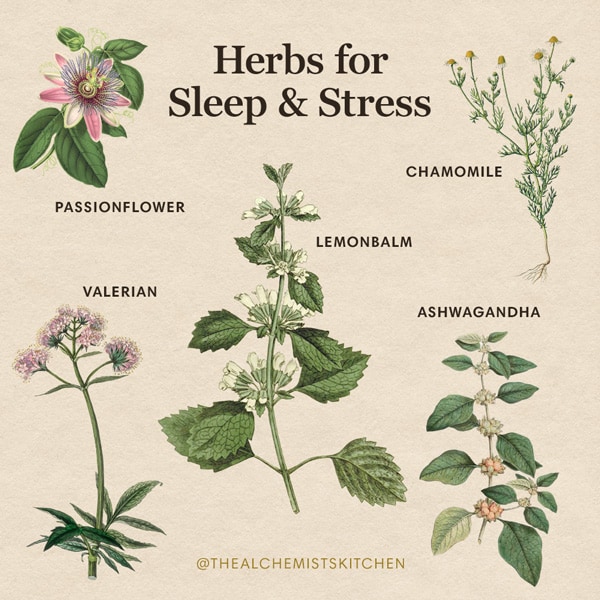 Valerian is often referred to as “Nature’s Valium.” According to the Herbal Academy, other common names for valerian include: garden valerian, all-heal, cut-finger, and garden heliotrope. The Latin “valere,” means to be strong or healthy, which restful sleep certainly helps with!

In a recent article, Franziska Spritzler, RD writes, “Valerian root contains a number of compounds that may promote sleep and reduce anxiety.These include valerenic acid, isovaleric acid and a variety of antioxidants.

Valerian has received attention for its interaction witgamma-aminobutyric acid (GABA), a chemical messenger that helps regulate nerve impulses in your brain and nervous system. Researchers have shown that low GABA levels related to acute and chronic stress are linked to anxiety and low-quality sleep.”

Valerian can be a wonderful support for those who have weaned off of their sleeping medication and are looking for a milder alternative. As an added benefit, valerian can also help with menopause and PMS!

If you have any liver issues, it’s best to speak with a doctor before taking, but otherwise, give valerian a try to help soothe your sleep issues!

You can try valerian in these REM for Restful Sleep Packets, formulated with a blend of gentle herbs, amino acids, and sleep hormones, this is an ideal combination for those of us who are focused on improving the benefits derived from a restful sleep.

Ashwagandha is an Ayurvedic herb that has long been valued for its potent effects on the body under stress. Because ashwagandha is an adaptogenic, it helps accommodate stressful changes (such as being quarantined!)

According to a 2017 study, ashwagandha contains a compound called Triethylene glycol, responsible for sleep induction. The study states, “results clearly demonstrated that triethylene glycol is an active sleep-inducing component of Ashwagandha leaves and could potentially be useful for insomnia therapy.”

Most herbalists agree that  ashwagandha rejuvenates and tonifies the endocrine and immune system– it enhances the body’s resilience to stress.

To try this herb out for yourself, you can add its powder form to tea or smoothies. Fat of the Land also makes a wonderful adaptogenic honey that includes not only ashwagandha but also maca (which also helps with stress)!

Chamomile may be one of the most popular herbs for sleep and stress, and can be found at drugstores and grocery stores all around the world.

According to the Herbal Academy, “You may be surprised to discover that the little apple-scented chamomile flower is full of nutrients such as calcium, magnesium, potassium, and B vitamins (Mars, 2015). These nutrients provide nourishment to the nervous system and muscles helping to induce a sense of calm while relieving muscle spasms and tightness.”

Chamomile can also be used to calm upset stomachs and ease the digestive process, though it has been used most popularly to help with sleep.

“A 2016 study of new mothers found that volunteers who drank chamomile tea every day for two weeks slept better and tended to have fewer symptoms of depression than subjects who didn’t drink the tea. A 2017 study found that elderly patients who took a larger dose of chamomile extract than that given in the 2011 study slept significantly better than study participants who did not take the chamomile extract.”

You can easily add chamomile into your life with tea every night a few hours before you sleep.

Traditionally, passionflower has been used to alleviate anxiety and improve sleep– it was a common herb in the 19th century to ease feelings of anxiety! As the Herbal Academy mentions, “Passionflower has the ability to slow breathing, allowing for deeper respirations while at the same time lowering the pulse and decreasing the blood pressure—three things that are common symptoms during panic attacks” (Ellingwood, 1919).

You can try passionflower in this soothing Hit the Hay Sleep Support Tincture, from our friends at Urban Moonshine! This traditional formula is used to promote relaxation and help you fall asleep quickly for a full night’s rest on the occasional sleepless night. You can also try passionflower in Anima Mundi’s Dream Elixir, an all-organic formula crafted to combat insomnia, promote deep sleep, and encourage lucid dreaming. The synergistic blend is composed of herbs that have been used by monks, shamans, and scientists for their deeply restorative properties on the hypothalamus — a pearl sized control center in the brain that directs the body’s most important functions.

Lemonbalm is an citrus-scented, aromatic herb that has been used for reducing stress and improving sleep since the Middle Ages.

Evidence shows that lemon balm increases GABA levels in mice, indicating that lemon balm may act as a sedative. According to The Herbal Academy, “This herbs might be best for those with anxiety-related insomnia. Lemon balm is a mint used for everything from insomnia to heartburn and cold sores. It contains a wide class of chemicals called terpenes which are known to calm nerves and reduce anxiety. A study was conducted testing the effects of lemon balm and valerian on restlessness and dyssomnia (a class of disorders that make sleeping difficult) in children. The study found that 80.9% of children with sleeping disorders managed to get a better night’s sleep (Muller & Klement, 2006).”

You can try sipping a lemonbalm tea before bed, or this Organic Joy Tonic, a carefully formulated blend of aromatic herbs and flowers that help to support you through life’s transitions (big and small) with grace and ease.

Because there are many reasons to be stressed right now, it’s so important you get as much high-quality rest as possible. It boosts your mood, energy, and immune-system! If you find your sleep suffering, reach for any of these healing herbs. 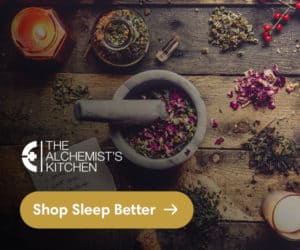 5 Herbs to Detox with this Spring

Building Up Your Immunity