Moringa (Moringa oleifera) has received many recent accolades by the health and wellness community, in which it has been touted as a nutritive, medicinal powerhouse and hyped as a panacea “superfood.” While we should be wary of over-the-top claims and trendy, “silver bullet” herbalism, Moringa, like most herbs, does boast a wide range of traditional and modern applications as well as impressive nutrient density. When understood and appreciated, it is a worthy addition to any herbalist’s repertoire! Sometimes described as the “Miracle Tree,” all parts of the tree are both edible and medicinal–plus, it grows prolifically in arid landscapes where hunger and malnourishment are major issues, posing a partial solution.5 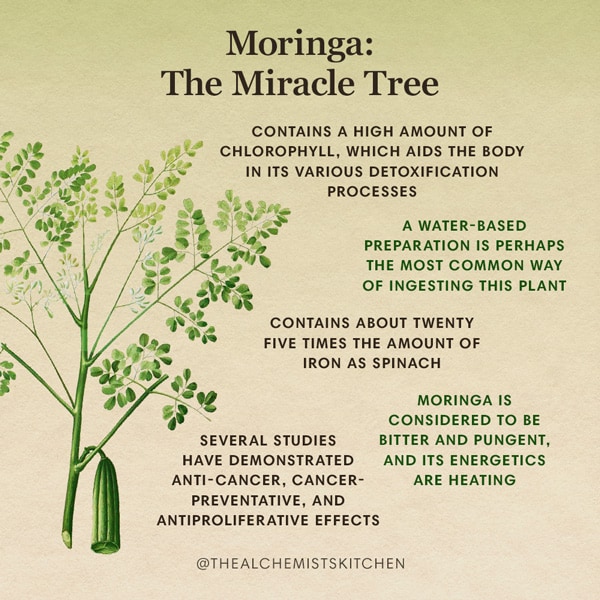 Moringa is a quick-growing, drought-resistant deciduous tree native to India and the Indian subcontinent. It has drooping, thin branches which produce green tripinnate leaves and clusters of fragrant, five-petaled hermaphroditic flowers that are followed by seed pods filled with large, oil rich seeds. It is also known as the “drumstick tree”; the name “Moringa” comes from the Tamil word “murungai,” which means “drumstick.” It is interesting in classification because there are only 13 species in the Moringa genus and it is the only genus in its family, Moringaceae, meaning that it is somewhat rare evolutionarily.3

Moringa has been harvested and enjoyed medicinally and for food by many different cultures wherever it has grown, especially due to its affinity for dry, desert landscapes. The following is a brief overview of the recorded origins of indigenous and historic uses.

In India and Southeast Asia, peoples have traditionally eaten the young seed pods, leaves, flowers, and mature seeds. In ancient Indian culture, as far back as 5,000 years, Moringa was considered an important fertility food due to its high levels of iron, potassium, and magnesium as well as other vitamins and minerals. The leaves contain compounds that are said to stimulate lactation and increase production of milk in both humans and animals; for this reason, the leaves have historically been fed to new mothers and milking livestock.3 Moringa seed oil, which has exceptional oxidative stability, was also eaten as an important source of fatty acids. In the Ayurvedic and Unani healing traditions, Moringa leaves were used medicinally as a poultice for open wounds and a remedy for ulcers, arthritis, respiratory issues, and infections. Moringa seed oil was used to support digestion, spleen and eye health.4

Recorded History of Use

Aside from being used as medicine and nutrition, it was also a highly valued ancient commodity. Moringa seed oil was found stored in a special clay amphora in the Tomb of Maiherpri, an Ancient Egyptian noble buried in the Valley of the Kings; this tomb dates back to approximately the 14th century BC. The ancient Egyptians, Romans, and Greeks consumed Moringa seed oil and used it topically as a remedy to treat wrinkles, cuts, scars, blemishes, and burns.2 Around the 4th century BC, Moringa seed oil was also used throughout India and the Middle East as a base for perfumery and early aromatherapy before the advent of alcohol distillation due to its rare ability to absorb and retain even the most elusive scents. It has also been used as a fertilizing plant spray, a natural erosion preventative and wind barrier, for purifying water, as a fungicide, a lubricant, a tanning agent for leather, as a dye, for fiber products.5

Moringa is considered to be bitter and pungent, and its energetics are heating. In the Ayurvedic tradition it is said to balance Kapha and Vata qualities, but aggravate Pitta, due to its hot energy. Those with dominant Vata characteristics should be cautious, however, and take Moringa in moderation due to its lightness and dryness. It also has been reported to have antimicrobial, hepatoprotective, antioxidant, antitumor, cardiac tonic, urinary tract tonic, thyroid tonic, immunostimulant, antiinflammatory, astringent, abortifacient, aphrodisiac, and blood sugar regulating effects.1

Moringa leaf contains an extremely high amount of chlorophyll, about four times the amount found in wheatgrass. Chlorophyll is antioxidant and aids the body in its various detoxification processes, particularly in the removal of heavy metals and carcinogens.3 The leaf also boasts a wide range of other antioxidants that provide copious free radical reduction, as well as all nine essential amino acids which have been shown to enhance anti inflammatory compounds in the body. In Bhava Prakash, a historic medicinal Ayurvedic text, Moringa is named Sigru (which translates to ‘moves like an arrow’) and is described as deeply and rapidly penetrating tissues to get to the level of bone marrow for deep cleansing.1

Though it is detoxifying, this herb is so nutrient dense–for example, Moringa leaf contains about twenty five times the amount of iron as spinach– that it also provides strengthening and oxygenating benefits, especially to the heart and blood. The aforementioned essential amino acids provide the necessary ingredients for making protein in the body, which are the building blocks of muscle and tissue. Moringa also contains remarkably high levels of calcium, a wide array of B vitamins, vitamins K, E, D, C and A, the minerals manganese, copper, magnesium, zinc, phosphorus, potassium, and sodium, all of which nourish and strengthen the body and its systems.3 In addition, several studies have shown that this herb extract has tonifying and protective effects on the digestive tract, liver, heart, lungs, and kidneys.1

There’s understandably been a lot of buzz around the anti-cancer, cancer-preventative, and antiproliferative effects of Moringa that several studies have demonstrated. One 2016 study that used a powdered leaf aqueous decoction on various cancer cell lines showed that the plant extract possessed anti-cancer actions and induced apoptosis (programmed cell death).5 Other studies have shown that phytochemical compounds present in Moringa, like one named “Moringin” have a protective action on DNA, which is helpful in mitigating the damaging effects of cancer treatments like chemotherapy.3 Though certainly not a standalone remedy, this herb can be a wonderful companion therapy in the holistic cancer-treatment repertoire. 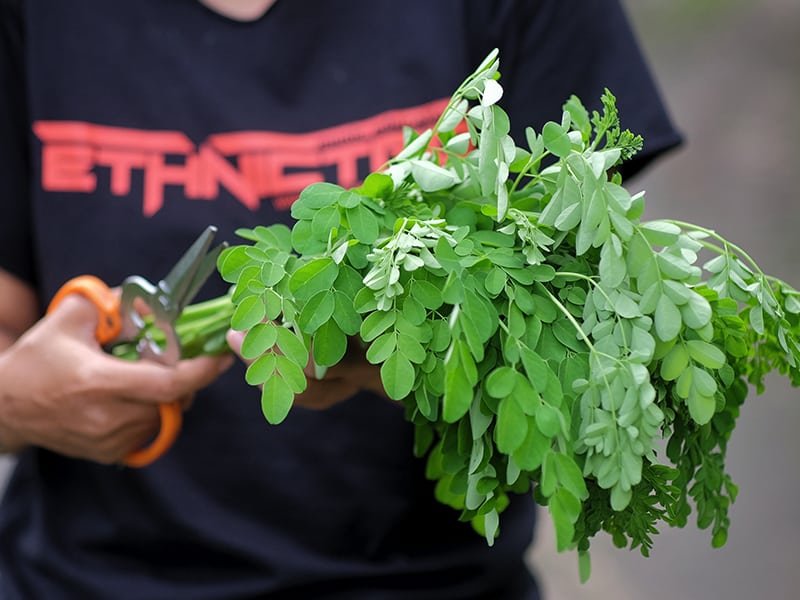 It has no known contraindications and there is no evidence it interacts with pharmaceuticals. As with any herb or supplement, consult an informed herbalist or trusted healthcare practitioner before use.

Moringa, like most herbs, has a wide variety of forms, uses, and applications! Here are some of the most common methods employed in modern day herbalism.

A water-based preparation is perhaps the most common way of ingesting this plant medicinally. Tea can easily be made by pouring 12 ounces of just boiled water over two heaping tablespoons of the dried leaf, covering, and allowing it to steep for 10-15 minutes. A cold water extract may be used as well, in this case, replace the just boiled water with cold or room temperature water, cover, and allow to steep for at least 4 hours. Alternately, leaf powder can be added to cold or hot water and consumables like soup, stews, smoothies, etc!

Seed Oil is not only a wonderful dietary addition but also a topical supplement for the skin. As mentioned above, Moringa Seed Oil is very oxidatively stable with a rich nutrient profile, making it a wonderful cooking or topping oil–it has been used in traditional Indian and Southeast Asian cuisine for thousands of years. In addition, it is a lovely topical treatment for skin and hair  issues like dry skin, eczema, acne, fine lines, and irritation. The oil contains many beneficial bioactive compounds like oleic acid, tocopherols, catechins, quercetin, ferulic acid, and zeatin.2

An alcohol extraction of is perhaps the most portable, convenient way to get your daily dose of antioxidant action. In fact, several studies have shown that a tincture preparation contains the most potent form of Moringa leaf’s antioxidant properties. To make a leaf tincture, simply pour the alcohol of your choosing (I recommend organic grape alcohol, diluted with filtered spring water to about 30%) over the dried leaves in a glass jar at a 1:5 ratio of liquid to plant matter. Cover, label, and let the plant matter extract for at least 6 weeks, shaking daily. Strain, press, and enjoy the benefits.

Where to Buy Moringa

Ideally, we could all grow and cultivate our own beautiful trees, however, since that is not an option for many of us, Moringa leaf and seed oil can be purchased from reputable sources like your local herb shop, or a well respected online herb dispensary. Always do your homework when it comes to sourcing, taking care to find companies with ethically cultivated and circulated herbs, especially when they’re imported. For example, The Alchemist’s Kitchen carries several fantastic, intentional small-batch products featuring Moringa as a primary ingredient. My favorite is the Anandamide powder from Sun Potion, a super tasty herbal powder blend that makes a great addition to elixirs and food!

Winter Nourishment and Detoxification with Moringa