Blue Lotus (Nymphaea caerulea) is a beautiful, water dwelling flower with mild psychoactive properties. Sacred to the Ancient Egyptians, depictions of Blue Lotus flower are ubiquitous in Egyptian art. Though alluring to our modern imaginations and worth further investigation, Blue Lotus is rarely used in Western herbalism as it is not currently a well understood plant, nor is it native to or abundant in North America. 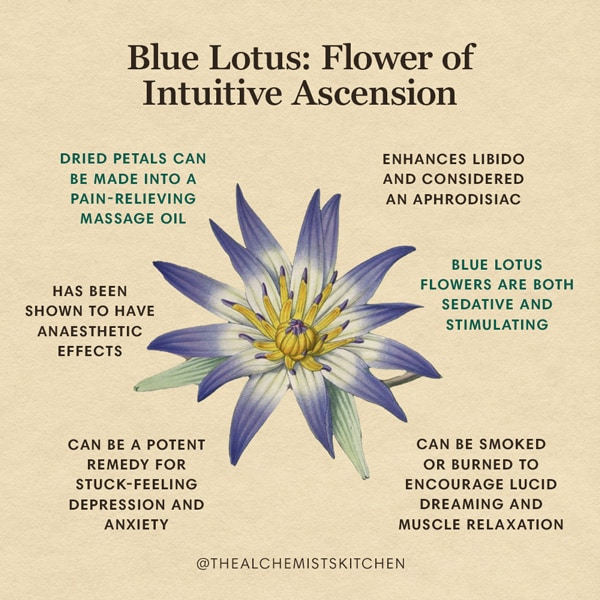 Blue Lotus is a tropical, aquatic plant in the Water Lily family that features day-blooming, light blue flowers which sit on the water’s surface. Long petioles connect the visible leaves with the deep, underwater rhizomes. The star-shaped flowers typically bloom for 3-5 days, moving with the sun and closing at night;2 Ancient Egyptians noticed this solar attunement and believed the flower’s golden center to be where the sun god, Ra, emerged from.3 All parts of the Blue Lotus plant (flowers, leaves, rhizomes, petioles) can be used medicinally.

Once naturally abundant and extensively cultivated in temple lakes and along the Nile River, Blue Lotus was a highly revered and sought after crop. It was exported throughout the Mediterranean, Greece, the Middle East, Tibet, and as far as the Alexandrian empire extended.2

While it’s rare to find this flower growing along the Nile now, it is native to northern and central Africa. Ancient Egytian temples and monuments are a testament to how well loved this emblematic flower was to their culture; Blue Lotus can be seen embossed on everything from thrones to calcite drinking chalices to papyrus.3 The herb was used ceremonially but was also made into cosmetics and perfumes; imbibed as a tea or elixir; and simply inhaled for its relaxing, intoxicating fragrance. The flowers and buds were often used recreationally as well, for their narcotic and aphrodisiac effects.1

In addition to being the birthplace of the sun god, Ra, this herb came to be associated with the afterlife and rebirth in Egyptian culture, specifically the Osiris myth. Brought back to life by the assistance of his sister and wife, Isis, Osiris became a symbol of life after death and rebirth through the legacy of Egyptian royalty.3 Thus, this herb was also considered to be the symbol of royalty and rulers, and indeed many royal accoutrement featured depictions of the flower; King Tutankhamun’s mummy was found covered with dried Blue Lotus flowers when exhumed hundreds of years later.4

Blue Lotus flowers, the most commonly used part, are both sedative and stimulating, creating a relaxed, open sensation while also pleasantly energizing the body and mind. This is due to two predominantly active constituents, the alkaloids Nuciferine and Aporphine. Nuciferine acts as a dopamine receptor blocker while Aporphine functions as a dopamine agonist that activates dopamine receptors, essentially the opposite effect as Nuciferine, creating a happy, uplifted, and euphoric feeling.1 These effects are likely why Blue Lotus is also considered an aphrodisiac.

In addition to inducing focused euphoria, Nuciferine’s interactions with dopamine receptors have been shown to have anaesthetic effects, producing a numbing physical effect and the emotional capacity to experience trauma or pain without lasting traumatic or shocked effects. This is significant, as it means supplementation could address a variety of conditions like neuropathic pain, inflammation-related depression, and fibromyalgia.4 Poultices of Blue Lotus leaf have also been used to alleviate the pain of burns, hemorrhoids, and bleeding.2

This herb’s energetic medicine is that of moving stagnant emotional energies, and it can be a potent remedy for stuck-feeling depression and anxiety. Like the mythology it inspired, Blue Lotus is a wonderful tool for renewal of all sorts. The alkaloid compounds mentioned above work as alkalizing, bitter agents, serving to move and detoxify our digestive and heart-centered systems. The water lily family, Nymphaeceae, is an ancient, ‘primitive’ family, so they carry information from time before the existence of homo-sapiens, reminding us of our essential nature. Since Blue Lotus induces theta brain waves, it can be helpful to use recorded affirmations or other reprogramming tools while ingesting.4 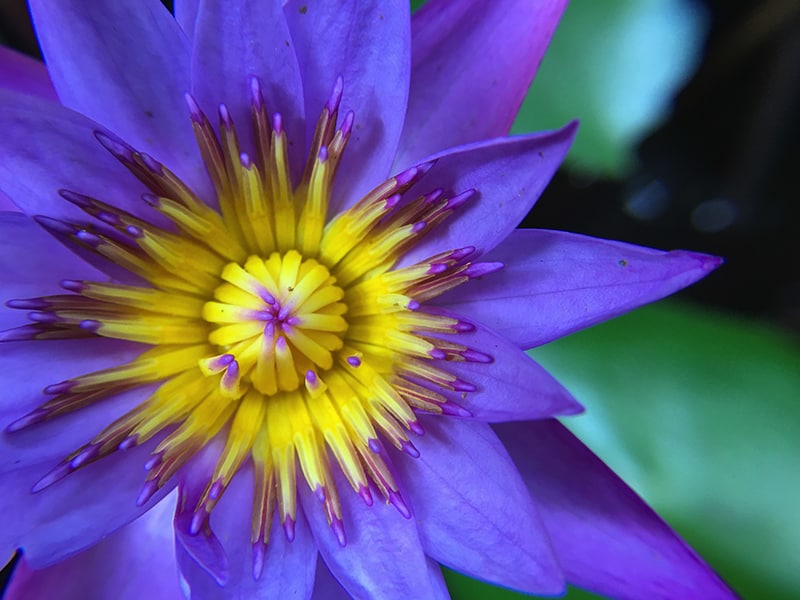 This herb is generally mild and harmless unless taken in very large doses, at which point it can lead to hot flashes, jittery feelings, and increased heart rate. When combined with pharmaceutical painkillers, Blue Lotus supplementation can cause nausea, dizziness, or disorientation. Children, pregnant people, and the elderly should not take large, regular doses of this herb.4 As with any herbal or supplement, consult an informed herbalist and primary healthcare practitioner before use.

Blue Lotus: Methods of Medicinal Use

Blue Lotus, like most herbs, has a variety of uses and applications. Here are some of the most common methods used in modern day herbalism.

Imbibing Blue Lotus as a tea or elixir is the most traditional way to experience this dreamy herb. Taking a few sips of an elixir or steeping a cup of Blue Lotus tea to enjoy before bedtime or meditation practice can relax the mind and body while opening up consciousness and sensory capacity. Steep 2 tablespoons of dried Blue Lotus leaves in 12 ounces of just boiled water for 10-15 minutes, making sure the vessel is covered so the fragrant oils don’t escape.

Blue Lotus petals can also be smoked ceremonially or burned as incense to encourage lucid dreaming and muscle relaxation. Simply sprinkle some of the dried flower petals into your favorite smoking blend or brun it in an incense holder on its own. This flower has been prized for its intoxicating fragrance for thousands of years!

Infused oil makes a lovely, pain relieving massage ointment that smells divine. To make the oil, add desired amount of dried petals to your favorite carrier oil blend and let steep for 2-6 weeks, shaking daily. Strain out the plant matter and use as a massage oil, or melt beeswax into the oil to make a salve!

Where to Buy Blue Lotus

Though this herb is rather difficult to find in the Western herbal marketplace, it can be ordered from reputable sources on the internet or, ideally, purchased from small, local businesses, like a neighborhood herb store or health food co-op.

To learn more about cannabis, mushrooms, and herbal remedies, check out our courses and events.